When I first opened the Advance II’s software, I got hit with a huge dose of deja vu. What is it about this software that seemed so familiar? After deep contemplation and then a realization that I should just look back to the original Advance review, my question was answered.

Yes, it seems that the software that gave me headache long ago made a triumphant return, because aside from the added menu up top for “Storm Tactics”, the GUI and options are almost identical. Because it’s been a while, I once again found myself scratching my head about how to pull off some simple tweaks, all of which were explained in the manual that came with the driver. While that’s all fine and good, I never believe a manual should have to be referred to for mouse software. Please, please, please Cooler Master and others… stop producing software that causes people to scratch their heads.

The “Main Control” portion of the software is the first section you’ll see after starting it up. Here, you can configure any one of the keys on the mouse (aside from the profile switcher as mentioned before), tweak DPI levels, OS sensitivity (a nice feature), double-click speed and button response time. You’re freely able to switch between any of the five profiles the mouse can hold with the buttons at the bottom. 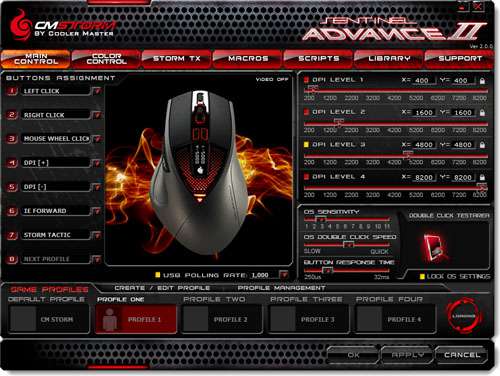 On the second screen, “Color Control”, you’re able to adjust both the front LEDs hidden underneath, and also those inside the belly of the beast. These are fixed colors, so you’re not able to fine-tune to your liking. Like other gaming mice with similar LEDs, there’s an inherent purplish tinge here, so if you choose the white option, it’s not going to be perfectly white but instead really light purple (or blue, depending on your interpretation of color). As before, you’re able to adjust whether the LEDs are always lit, if they pulsate or if they only turn on when you click a button.

For clans, or those who simply want to customize their mouse, you’re able to upload an image on this screen that will replace the CM Storm logo in the OLED screen. 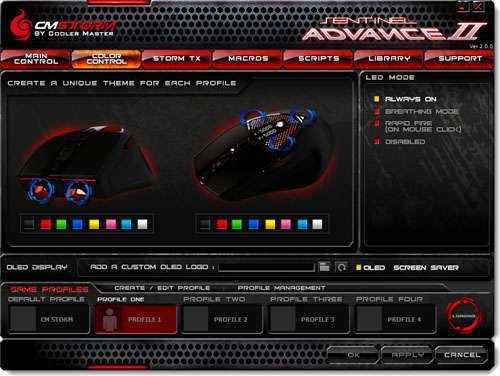 When you configure button #7 (“TX”) to be used for Storm Tactics, this screen will open up, allowing you to tweak its function to your heart’s content. The idea is that when you hit the TX button and then a button combination on the mouse, an action will occur. This could be something as simple as rapid firing to something more complex like running a script or macro. In the example below, I configured it so that when I hold TX and then left click my mouse, it rapid fires 10 times in a row.

Something that manages to drive me batty on this page is finding the appropriate action in the mini-menus given. These menus, despite having a ton of screen real-estate to use, only show three items at a time, in a list of about 30. This is nonsense, and needlessly adds to the level of tedium when customizing your mouse. 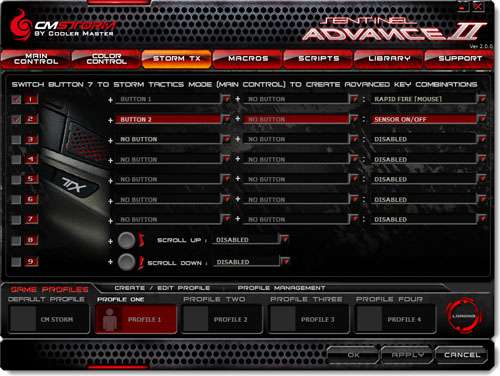 Creating macros on the Advance II is fairly straight-forward. Saving and understanding how to run the macro is another story. For my simple macros, I chose the key that I wanted to assign it to (Storm Tactics 3, for example, which in my case represented the scroll wheel), saved it, and then went over to my Storm TX page and assigned #3 to that Macro. It sounds simple enough, but when you actually go to do it, you might find yourself a bit lost. The macros I did test out ran fine, contrary to the experience I had with the original Advance. I didn’t get too deep into testing, as patience can wear thin when the software sucks the fun out of things. 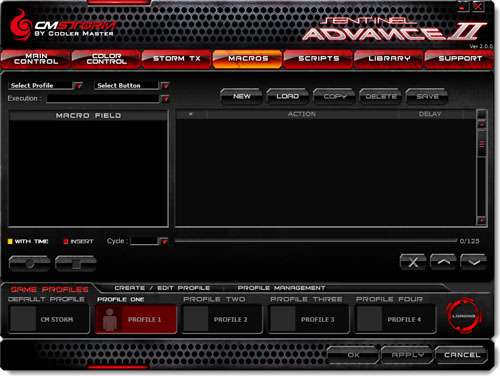 For those looking to create more robust macros, the “Scripts” section is for you. Your options here are a little more advanced, but for the most part the creation and saving process is no different than a macro. In fact, this is no more a script than macros in general, so it should really be called “Advanced Macro”. 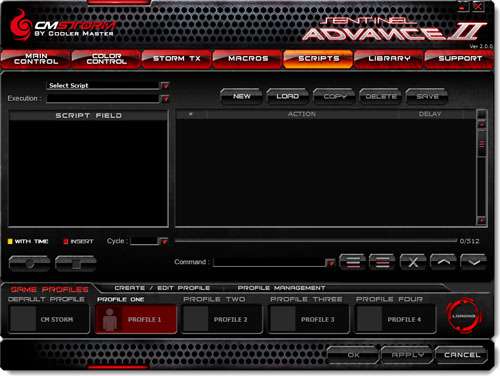 On the Library page, you’re able to swap which macros and scripts are stored on the mouse, and also backup the ones that are there to the PC. This would be less of a problem if mice would include more than a piddly amount of memory, but alas, that doesn’t look to ever look to be a trend that will catch on. 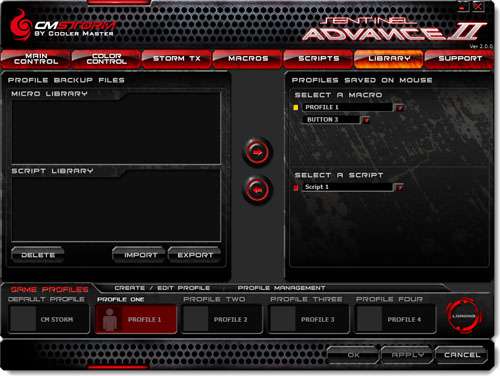 To quote my original Sentinel Advance review: “For the most part, I quite like the software here. It’s not only the most robust mouse software package I’ve used, but it’s also the best-looking. To make it even sweeter, you don’t even have to install it on your PC if you don’t want to. This is because all of the settings are stored right inside the mouse, so no driver is required. This also means that if you hop on a computer other than your own, your settings don’t move.“

That all still applies. But once again, I found dealing with macros to be a chore. Three years sure didn’t fix that issue.