For its $60 price tag, Cooler Master’s Sentinel Advance II is an attractive gaming mouse. It’s not perfect (especially when moving over from my SteelSeries Sensei, which has proven to be my favorite mouse to date), but it sure does pack a punch without breaking the bank.

First, the mouse is comfortable. While Cooler Master continues to ignore left-handed gamers with its gaming line-up, the Advance II, like the original, is still one of the most comfortable mice I’ve ever used. It’s bulkier than the Sensei that I’ve become used to, but it nowhere close to being “too big”, where if feels like you are gaming with a loaf of bread in your hand.

The software, like most of Cooler Master’s that I’ve used recently, is good for the most part. It’s attractive, feature-rich and applies your changes very quickly. However, saving macros and assigning them to specific keystrokes can be more tedious than it should be, which stems mostly from the fact that Cooler Master doesn’t explain the abilities too well. It’s more of a live and learn sort of deal, and if you have patience, the sky’s the limit. 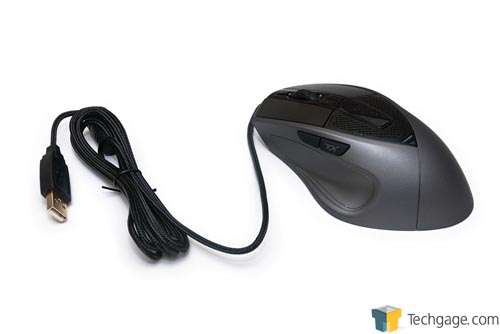 A major improvement of the Advance II is the move to an Avago sensor. The original Advance risked the chance of skipping a beat in the heat of action due to its lackluster sensor, but I didn’t have that problem with this mouse. There were occasions where my cursor would develop a mind of its own, and move around my screen, but I’m still in the process of figuring out why that is. Both Cooler Master and others have told me that’s usually a sign of subtle vibration, and as I just moved to a new place, I can’t discredit that right away. Since my SteelSeries Sensei features an identical sensor, I’ll be seeing if I experience the same issue with that mouse over the next couple of weeks.

The biggest problem with the Advance II is that it has the tendency to gather dirt and result in a sticky cursor, totally unrelated (I believe) to the sensor. The area around the sensor bulges out a bit, and that’s likely the biggest problem. This is not an issue I’ve had with the Sensei, where the area around the sensor is completely flat. There isn’t even a problematic plastic ring that so many other mice vendors like to toss in.

What I do like about the Advance II is that you’re able to set four different DPI levels on any profile and adjust them easily, thanks to the dedicated buttons. I move between Linux and Windows quite often, and also different games, so I’m often switching my profiles and DPI on-the-fly and appreciate that the ability to do that is made easy on this mouse.

For those looking for a solid gaming mouse at $60, Cooler Master’s Sentinel Advance II is well worth your consideration.

As a side note, Cooler Master sent along its Speed-RXL mousepad to test the mouse out with, though I didn’t ultimately use it too much. The biggest reason is that the pad itself was far too large for my desk, and secondly, it had a bit more “grip” than I personally like. If you like a mousepad with a bit of drag, then it should be right up your alley… I just happen to like things a little glidey. My Ratpadz XT has forever spoiled me.