After taking a look at Cooler Master’s QuickFire Pro keyboard last month, we walked away knowing that the company knows how to make a quality mechanical offering. Will the Trigger reaffirm that belief? It adds macro support, a palmrest and expands the backlighting to the entire keyboard – so it has a good chance.

After I fell in love with CM’s QuickFire Pro, I was excited to give the Trigger a test, since, at $20 higher, it should be even better. In some cases, it is. It has macro support, so that’s a major advantage, and it also has a comfortable palm rest. And who doesn’t love to have every single key backlit? Then of course there’s the fact that you could brag to your friends that a Lambo could run over your keyboard and it’d still be good to go.

Both the QuickFire Pro and Trigger use identical switches, though on the Trigger I found I had to break them in a little bit. At first, the keyboard just didn’t feel the same as the QuickFire, nor was it as loud. After a day however, the same feeling and sound that I expected clicked in (pardon the pun). I loved the QuickFire for its responsiveness, and that carries right on over to the Trigger.

Despite the initial headaches that the Trigger’s software caused, I found it to offer the best macro configuration of any gaming peripheral I’ve ever used, and that counts for something. So does the ability to alter the function of pretty-well any key on the keyboard – including adding macros to standard keys. The sky’s the limit as far as configuration goes. 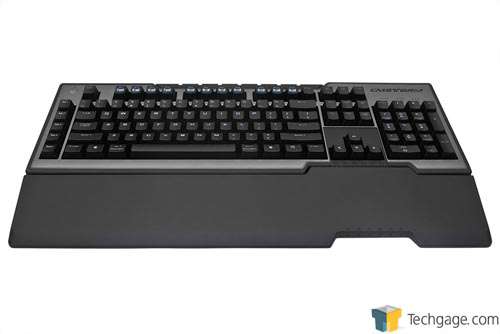 A minor problem I had with the QuickFire Pro that I didn’t mention in the review (due to it being so minor) is that on occasion, some keys might give off an audible squeak. It happened so rarely that for the most part, I just never thought about it. Things are a little different on the Trigger, at least with our sample. The space bar has a very obvious squeak to it, which I hear on almost every press. It’s not major, but a squeak can be annoying even when subtle.

It could be that, like the noise and feeling of the keys initially, the squeak will be worked out over time. But up until this review, I’ve used the Trigger every day, and for many hours each day, for two weeks straight – the squeak remains.

As frustrating as a squeak is, though, the Trigger has another flaw that dwarfs that one. Because of the high-power that the keyboard demands, there are going to be cases where the keyboard might not work right after a boot, or after the keyboard is plugged in (when already in an OS). When I raised this issue with our CM rep, we were given a reference to an entry in the Trigger’s support section. In part, it states:

Since Trigger features a very powerful integrated processor, detailed firmware and a lot of memory, it requires more time than other Keyboards to initialize. On some PCs this can cause the boot process to slow down for a second, or result in Trigger not being recognized. In this case please use another keyboard to enter the BIOS and disable “QuickBoot” or “FastBoot”.

Requiring a user to alter a BIOS option for a keyboard is strange enough in itself, but stranger still was when I entered my PC’s BIOS and saw that my Quick Boot feature was disabled. For fun, I enabled it and then rebooted. That resulted in the issue becoming so bad that I had to grab another keyboard just to undo the change.

The reason this issue became a real problem for me is twofold: A) I have an OS selection menu at boot time and B) I need to type in a password to enter either Windows or Linux. With this issue, the keyboard would sometimes not work during event A), and then sometimes not work during event B). Whether or not the keyboard works at boot or after plugged in when already in an OS is totally random. I tested the keyboard on three different PCs (two featured a BIOS and one an EFI), and even after 50 or so replugs, I couldn’t find a theme to help me figure out when the KB would or wouldn’t likely work.

The tip pulled from CM’s support section covers the boot time, but as mentioned above, the issue can also occur when already in an OS. The “USB Device Not Recognized” error above was seen at random times after unplugging and plugging the keyboard back in on all three PCs I tested it on. Sometimes, replugging the keyboard again would solve the issue, and sometimes it wouldn’t. About two weeks ago, I was playing Borderlands with friends, and had to reboot. It took me nearly 15 minutes to get back into Windows with a working keyboard and ultimately back into the game.

This is an issue not unknown to Cooler Master, which is why the official support section tackles it. One recommended solution is to take advantage of a power adapter that the Trigger can use. Unfortunately, I had no adapter that could fit the port on the back, so I was unable to test it in this way. One is not included with the keyboard, and I don’t believe Cooler Master plans to sell them as an add-on. And let’s be real – who wants to plug a power adapter into their keyboard? I sure don’t.

In the end, the Trigger is not a keyboard I can recommend at this time. I’ve talked to others who have tested out the Trigger also, and haven’t been able to find anyone who’s experienced the above issue (or the squeaking) as severely as me. It could be that I received a borked sample, but after detailing all of the issues to Cooler Master, it didn’t seem likely – and once again, the power issue is detailed in the official support section.

I had hoped that the Trigger would blow my socks off, but thanks to the above issue, it left a sour taste in my mouth instead. Chances are good that the issue could be fixed in firmware, and if so, I hope to see a new one released soon. But with the issue as it stands, I recommend the Trigger be skipped over. If macros and full backlighting aren’t a must-have for you, I still highly recommend CM’s QuickFire Pro.

June 11th Addendum It took a while to get here (thanks to UPS), but I received a replacement Trigger late last week and have been using it since. As is now obvious, the original sample I received either had poor firmware, or was faulty in some regard. The replacement works just as I’d expect it to, and across the same three PCs as mentioned above, I have no issues plugging it in and have it work 100% of the time.

With our original sample, booting into the BIOS was impossible. The board just didn’t have enough time to initialize. With the replacement, that problem no longer exists. In fact, there hasn’t been a single time with this replacement that the board hasn’t been rock-solid. It’s unfortunate that the sample I did originally receive was borked, as the review reflected poorly on what in actuality is a great product.

Prior to and after posting our review of the Trigger, I perused about 10 other reviews, and no one mentioned the issue I experienced. Thus, I believe this to be a rare issue, and one that shouldn’t be held in high regard against the product. Ever purchase a product, just to get it home and not have it work? It happens.

At this time, I’d like to retroactively award the Trigger with our Editor’s Choice. If we didn’t experience the major issue laid-out above as a result of the fault, we would have awarded it originally. That said, if anyone out there experiences the same issue, I’d be interested to hear about it. And if that does happen to be the case, don’t consider it to be normal, and make sure to get it replaced.