Most of us have heard the quote, “Necessity is the mother of invention.” It appears Cooler Master has taken it to heart with its MasterLiquid Pro 240 all-in-one liquid cooler. Read on as we cover the inventions that make this cooler an absolute necessity.

All of our testing is performed under controlled conditions to ensure accurate and repeatable results. The test system is kept in a near steady 20°C ambient environment with readings taken before and after testing with a standard room thermometer. Temperature monitoring and recording was handled by AIDA64 Extreme throughout the entire testing process.

Stock CPU settings were obtained by reverting to the default settings via the motherboard BIOS, then disabling all power saving features along with Turbo Boost to ensure that we maintained a constant frequency.  We then changed the CPU ratio to 39 to mimic the maximum non-Turbo frequency of 3.9GHz.

While it’s true that this isn’t out-of-the-box-stock, it comes down to needing a solid operating frequency across all cores that doesn’t change, resulting in unskewed temperature readings through the entire test.

The maximum stable overclocked frequency of 4.5GHz was reached by changing the multiplier to 45 and increasing the voltage core to a whopping 1.61v.  This is a ton of extra voltage, but it was the only way to keep the system stable while allowing an overclock that we feel is where most enthusiasts are likely to end up.

Every chip is different and some might be able to run a similar overclock without too much voltage beyond the stock setting, but this power hungry processor should give us a worst case scenario.

ASUS’ Cool ‘n Quiet fan speed management is disabled on all fan headers to ensure that the chassis and cooler fans run at full speed, resulting in the highest level of performance possible.

A fresh, fully updated installation of Windows 10 is allowed to sit idle for 10 minutes after startup to ensure all services are loaded before recording idle CPU temperatures. CPU load temperatures are generated by performing a 20 minute run of the OCCT Linpack CPU test to generate as much heat as possible.

Even with the insane amount of core voltage needed to make our A10-7870K stable, which jumped even higher to 1.64v during overclocked load testing thanks to Load Line Calibration, the MasterLiquid Pro had no problem keeping temperatures well below the thermal limit of 72.4 degrees Celsius.

This is more voltage than most will likely ever use, so they can expect even lower temperatures than we saw.  Intel users aren’t likely to fret either seeing how those chips tend to run with far less voltage than those from the Red Team.

The evil scientist in me wondered just how far this cooler could really go, but making our new test rig melt into a pile of goo wouldn’t be a good way to extend my tenure here at Techgage. Instead the focus was placed on reducing the amount of noise generated by the cooler, while still keeping temperatures in check.

To do this we entered the BIOS and enabled ASUS’ Cool ‘n Quiet fan control on the appropriate headers and let the motherboard handle the fan speed based on the temperature of the CPU. The default profile was set so that the fans would spin at 60%, or 1,200RPM with CPU temperatures up to 40 degrees, and gradually ramp up to 100% by the time the CPU reached 70 degrees.

This change brought sound levels down somewhat, but we still wouldn’t call it quiet, however this speed reduction only resulted in a single degree increase to 53 degrees with the overclocked CPU placed under full load.

Unfortunately 1,200RPM, was the lowest speed allowed even though the included fans are able to spin at 650RPM.  Whether or not this low speed could keep our overclocked CPU under the thermal limit remains to be seen, but it appears that we’ve identified a gap in our testing that could be fixed by installing a separate fan controller since software solutions yielded no change in speed.

It has been a blast to finally get back into the cooler testing game.  Had the Cooler Master MasterLiquid Pro 240 not performed so well, my outlook after completing testing would likely be far less jubilant considering how much time was spent dialing in our maximum overclock.

However, there is a silver lining in all of this, and that’s the fact that we have a stable rig with an overclock configured in such a way that it likely puts out more heat than most systems.  This in turn means that we’ll be able to better see which coolers are worth your money and which ones should stay on the store shelf.

Whether it’s marketing mumbo jumbo or not, it appears that all of the features that make up Cooler Master’s Flow Op technology, make this AIO live up to the high performance claims.  The square fin array is hardly as square as it is made to look in the official marketing shots, but it’s still easy to see that the gaps between the fins and the area that contacts the coolant channels  is wider than on many other AIO coolers we’ve tested before. 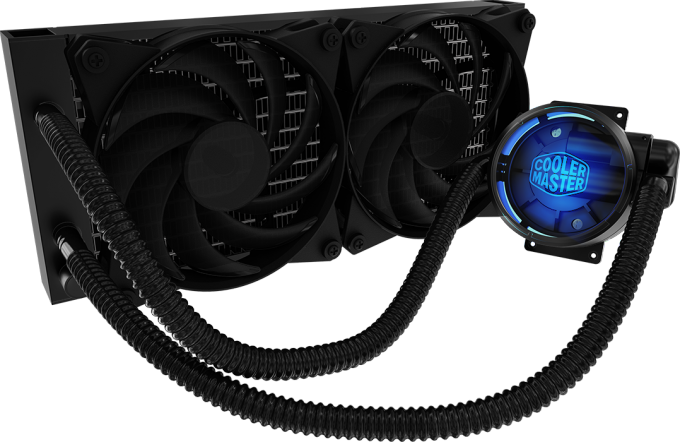 Installation was a breeze and was partially tool-less, although we still recommend using a screw driver when securing the block and pump unit.  The illumination on the unit is a nice touch for those who want a little extra flair, and including a rubber dampener to sit between the fans and the radiator to absorb vibrations, as well as a Y-cable for those who are running low on available fan headers is clear that Cooler Master is covering all of the bases.

The MasterLiquid Pro 240 is currently retailing for about ~$110 USD, while the Pro 120 variant with a 120mm radiator and a single 120mm fan will set you back almost ~$100 USD.  This is about $15 more than a direct competitor, which makes us wish we could secure a sample to compare the two larger versions in order to see if the price premium is warranted.  In the end we feel it is based on what we saw during testing, so don’t let the price tag throw you off.

If you’re in the market for an AIO liquid cooler, the Cooler Master MasterLiquid Pro 240 is certain to wow, regardless of the cost.