When Cooler Master released their HAF 932 full-tower last fall, it was well-received for its overall design, build quality, impressive cooling-ability and, to some, aesthetics. With the success of that case, CM has followed-up with a mid-tower version that follows many similar design cues, but happens to look even better, and costs less.

For my testing I used a new program called OCCT 3.0. Not only does this simple program push the CPU to the brink of a meltdown through the use of LINPACK testing for Intel processors, it also turns up the juice on your GPU. It automatically maintains graphs of temperatures throughout your testing. I highly recommend you try it out on your own for your testing needs. I always run all my tests 3 times and take an average just to weed out any erroneous results. My ambient temperature is kept at a near constant 68°F (20°C) year round as my test bed PC is in my basement. There are no fans or heat vents in the area of the test platform.

I use a static overclock and settings for all my testing. Stock testing is done with all settings in the motherboards BIOS to Auto. Overclocked testing is done by turning the CPU multiplier to 11x and manually setting the Vcore to 1.275v as well as enabling line load option. This results in a processor frequency of 3.67GHz with 1.25v Vcore as reported by CPU-Z in Windows. The video card is by nature of being fanless does not over clock enough to change the results so it remains at stock speeds through all testing. This is by no means the absolute maximum clocks, they are just meant to add extra stress to the components to simulate a potential overclock obtainable by most people.

Our system for testing is as follows:

The build process was very straight-forward. I cannot stress the fact that there was more than enough room for my oversized hands no matter where I was trying to work. I tend to mount the Zipjang cooler to the motherboard before the installation since it is nearly impossible to push in the mounting clips. This can make securing the motherboard tricky. I also was able to plug in the 8-pin EPX power connection without much fuss as well. 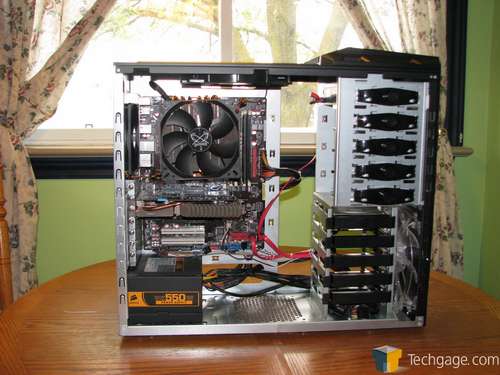 As for running the wiring, we are treated to a large array of stamped step outs that allow you to simply slip a zip tie through them for securing duties. I am somewhat of a fanatic when it comes to running wires considering a sloppy job can dramatically affect the cooling performance of the chassis. I was able to quickly secure everything down out of the way and there was plenty of room for all the extra power supply wiring to be tucked into under the hard drive area. I spend minutes doing what you see here, so just imaging what can be accomplished if you devoted only a few more. 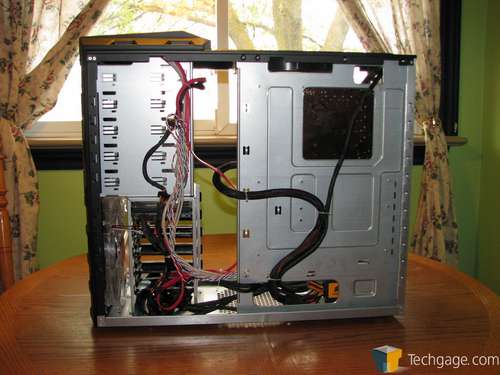 A quick flick of the power button and everything silently came to life. It was so silent I actually caught myself checking the power plug to be certain it was actually pushed into the wall. I am also a huge fan of silence when it comes to my computer and I can attest that you will be hard pressed to find another chassis to be any quieter. After a quick check to make sure that all fans were running full speed (which they were) it was time to fire up OCCT. 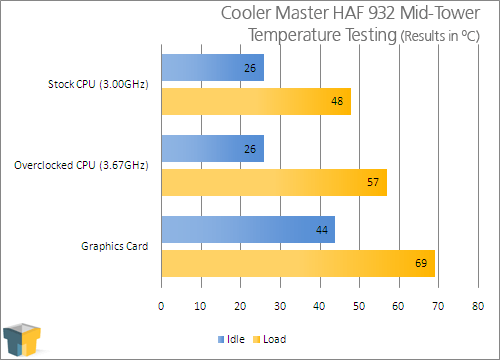 The final results were all very good. I was even more impressed with the fact the fan-less video card was kept under 70°C throughout the testing even with no side panel fans installed. There is no denying that airflow here is top notch.

Mid-tower cases have seemingly always had to sacrifice in one area to make up for others. If you got one with good airflow, then it often lacked in space. If space was good it would then have issues with wiring. If those two areas were good then you just couldn’t fit that oversized heat sink and the side panel fan. There was no way to please all of our desires.

The HAF922 has broken all these rules. We not only get our cake as well as being allowed to eat it too. Cooler Master wisely chose the route of making the chassis wider than the norm which gives it the abilities to swallow it all up. For such a small footprint we are treated with a virtual chasm to work in. There is over 13″ of space between the rear of the case and the hard drive area allowing for the biggest video cards known to man to comfortably fit inside. 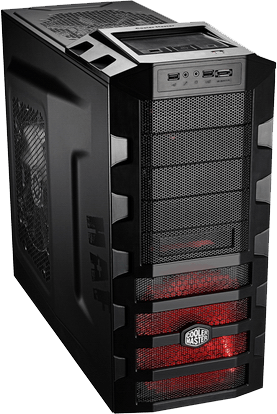 Another major strong-point that has become a hallmark is the quiet and massively effective cooling being built into all their cases. Sporting “just” three fans, we are treated to an ample supply of airflow that will make the task of stopping the meltdown of your parts simple. It never ceases to amaze me just how quietly they can run the fans yet still not affect performance in the least.

When looking for flaws, I found that most were a matter of personal taste. I would have liked to have been able to internally mount my water cooling. I also found some of the edges were a bit sharp although you would have to be putting your fingers where they really didn’t belong to find them. I also prefer a painted interior while conceding that this does affect the cost of production. While there is little adoption, I would have also liked to see E-ATX compatibility considering there is ample room and airflow to accommodate it.

All in all, this is a great chassis. My rating is a strong 8 out of 10. Don’t let this deceive you in your thought process of buying it, however. This is a solid choice with little competition at the reported price point. The main thing stopping it from scoring anything higher was the somewhat limited flexibility for other forms of cooling. You would be hard pressed to find a better air cooling based chassis in the mid-tower category on the current market.