Cooler Master’s HAF series of cases have long been favored by many enthusiasts thanks to their sturdy construction and feature-rich likeness. This was especially true with the HAF 932 released three years ago. For that reason it has been updated to an ‘Advanced’ edition, bringing a refreshed look and some worthwhile new features.

‘Cooler Master’ and ‘HAF’ have become well-known names in enthusiast circles, and for good reason. The company has been a major player in the case, CPU cooler and power supply market for as long as I can remember, with its HAF series of cases often proving to be some of the best enthusiast / gamer options out there.

The HAF name stands for ‘High Air Flow’, so the goal of the series is clear. But, HAF cases are also designed to look good, catering to gamers, and provide a huge amount of features and no limitation on building the best PC possible.

At the bottom of the chain is the mid-tower HAF 912, at around $60, and at the top is the ultra-popular HAF X – which happens to be the model we use for our graphics card testing machine. Just under the HAF X is this one, the HAF 932 Advanced. It builds upon the original, released almost three full years ago, improving both functionality and looks. 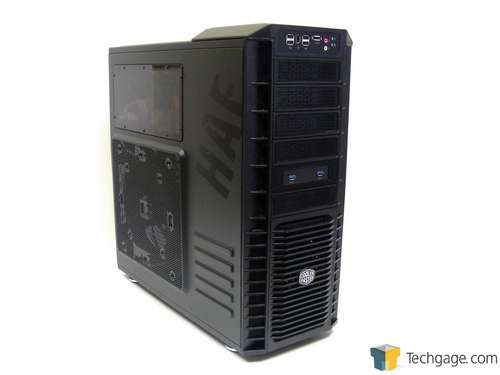 This full-tower behemoth is constructed from steel with plastic accents and can handle micro-ATX, ATX and extended-ATX motherboards. The front panel shows off a good range of connectivity at the top with two sets of USB 2.0 ports on either side of an IEEE 1394.

To the right is an eSATA port, 3.5mm microphone and headphone connections and the blue power and hard drive activity LEDs on the far right. Below the front I/O area are six 5.25″ mesh-covered drive bays. The second bay from the bottom is taken up by two USB 3.0 ports, and is the first improvement. These ports are connected directly to a header on the motherboard instead of the rear I/O area as found on many other cases. 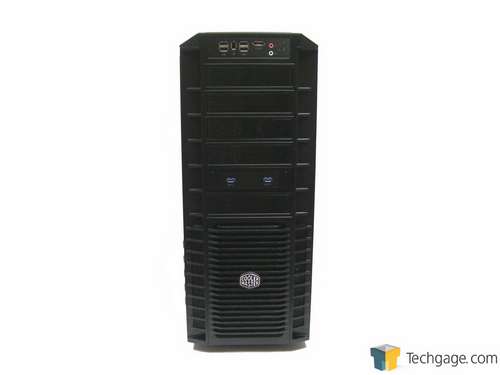 The rest of the front panel is taken up by the vents for a huge 230mm red LED fan. Since HAF stands for ‘High Air Flow’ as mentioned above, this choice of fan seems fitting. According to the specifications on Cooler Master’s website, it spins at only 700 revolutions per minute (RPM) while making a whisper quiet 19 A-weighted decibels (dBA), but there is no mention of how much cubic feet of air per minute (CFM) it can push. 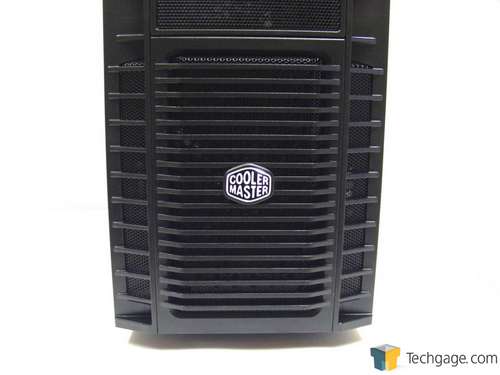 A good portion of the left panel is taken up by a large mesh area where a second 230mm fan is found. This fan is not lit by LEDs but has the same specifications as the one at the front and can be swapped out in favour of up to four 120mm fans. To the right of this area are vents to allow some extra air into the system near the hard drives. Up at the top towards the rear half of the panel is long, rectangular window that allows for a sneak peek of the interior and finally, towards the front is the typical HAF lettering that is visible thanks to a difference in paint texture.

The back of the 932 Advanced has a power supply opening at the top and bottom. From the factory, the top opening is capped by a cover with two rubber grommet-lined holes to run hoses for water cooling. Two power supplies can be installed should the system be especially power hungry, or one can be installed in either area depending on the layout the user would like.

Below the top power supply area, from left to right, are the motherboard I/O opening and a 140mm non-LED fan. This one runs at 1,200RPM while still being nearly silent at 17 dBA and can be swapped out for a 120mm fan if needed. The rest of the rear panel is taken up by the seven vented PCI slot covers and an extra vented area to the right. In between the covers and the vented area are plastic tabs that make up part of the retention system for expansion cards that will be looked at later on. 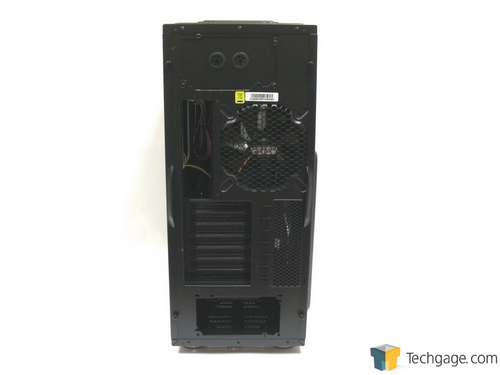 There isn’t much to look at on the right side with the exception of vents at the bottom front similar to those on the right side. The rest of the panel has a raised area that breaks up an otherwise plain surface. This should help provide a little extra room to tuck some cables behind the motherboard tray while adding strength and reduce flexing. Both side panels are held on with black thumb screws and simply swing out to be removed. 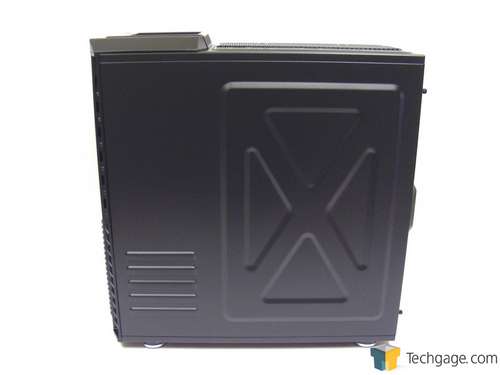 Moving up top to the front of the case finds a large rectangular power button to the left and a round reset button to the right. Behind it is a rubber mat that can hold various bits and pieces of connected devices, but it also has a surprise. Before that is looked into, the rest of the top panel is taken up by the mesh area where air can be exhausted by a final 230mm fan. Another non-LED fan, this one has the same specifications as the other two and can be replaced with up to three 120mm fans or a radiator measuring up to 360mm in length. 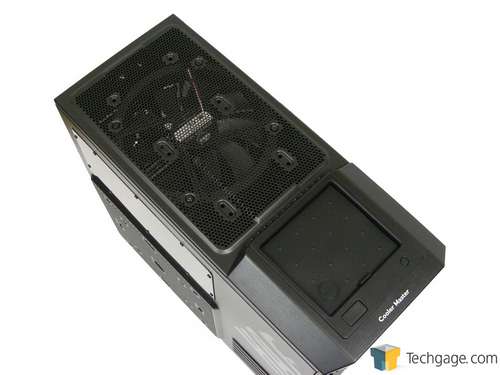 So let’s go back to the rubber mat that lines the tray behind the power and reset buttons. A quick tug upward on the tab at the front reveals a fill port for an optional reservoir that can be installed in the top 5.25″ bays. This allows users to top up the coolant in a water cooling setup without opening the case. 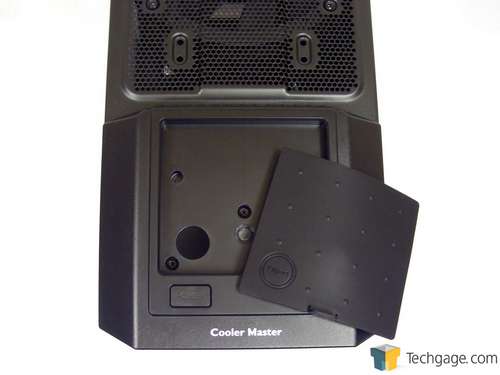 Flipping this giant over is an awkward experience simply due to its size, but once it has been, there are four stereo-style case feet with rubber bases to lift the HAF off the ground for extra ventilation, absorb vibration and stop slipping. Most of the underside of the case is taken up by the mounting area for the power supply or, if a top mounted power supply is being used, two optional 120mm or 140mm fans. If the power supply will be mounted at the bottom, only one fan can be installed depending on the size of the power supply itself. 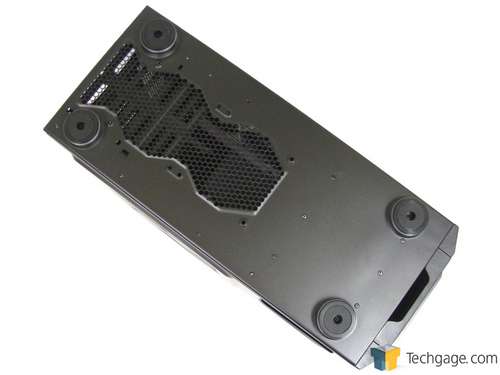 With the exception of the USB 3.0 connections on the front panel, the Advanced version of the HAF 932 looks very much like the original, so it’s time to rip off the panels and see what has been updated on the inside.