Cooler Master’s HAF series of cases have long been favored by many enthusiasts thanks to their sturdy construction and feature-rich likeness. This was especially true with the HAF 932 released three years ago. For that reason it has been updated to an ‘Advanced’ edition, bringing a refreshed look and some worthwhile new features.

Removing the side panels is easy thanks to the thumbscrews, and the 5.25″ bay covers are removed by pushing the tabs in on either side that are accessible from outside of the case while the vent for the front fan pulls away easily with a gentle tug. Neither the bay covers or the fan vent have additional filters on the inside to help keep dust out. 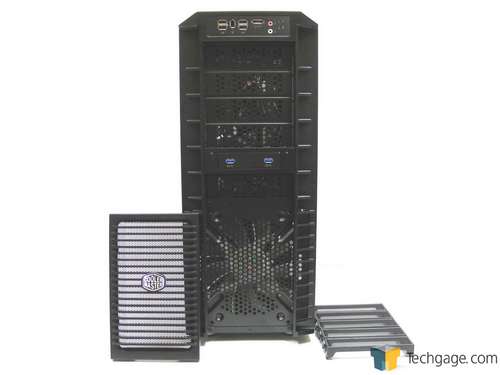 Before moving on, I want to mention the inside of the left panel. The 230mm fan installed in this location features a grill to ensure that nothing makes contact with the blades. 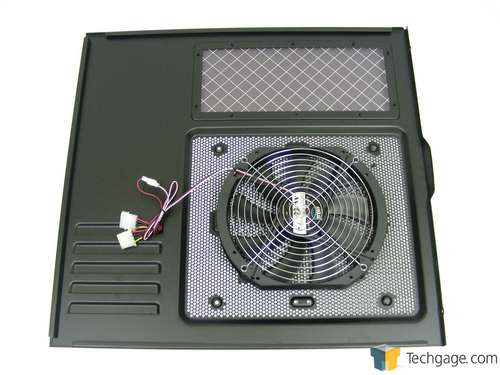 As expected, the interior of the case shows off an all black paint job instead of grey as found in the original. This not only looks good but helps to keep the interior looking as clean as possible once cables are routed. 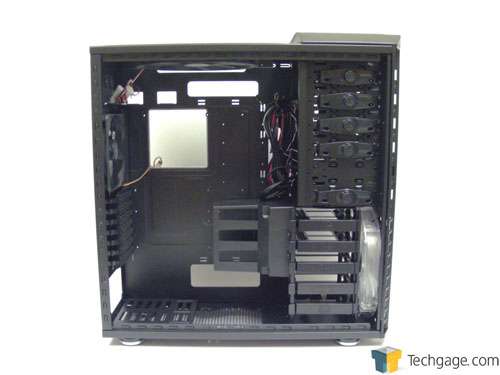 At the bottom front are five side-mounted hard drive bays that can each accept 3.5″ and 2.5″ drives. The drives are secured to the trays and they then slide into the hard drive cage. 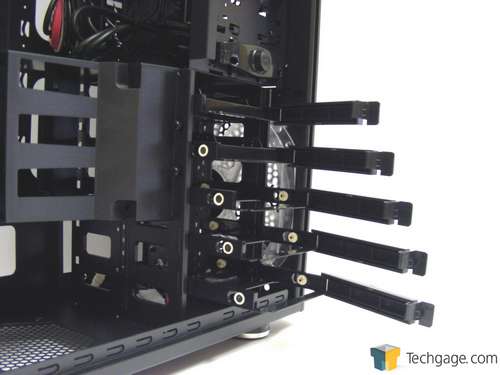 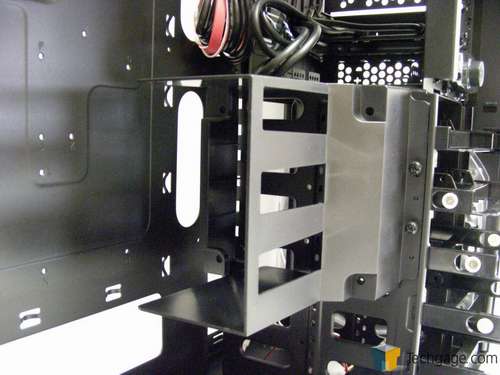 Above are the five tool-less 5.25″ drive bays along with the typical Cooler Master button locking mechanism that is as simple as any that I have ever seen. There are six bays in total but as mentioned before, the second one from the bottom holds the front panel USB 3.0 connections. The bottom bay has a 5.25″ to 3.5″ converter installed for those who still need a floppy drive, small fan controller, card reader or other device. 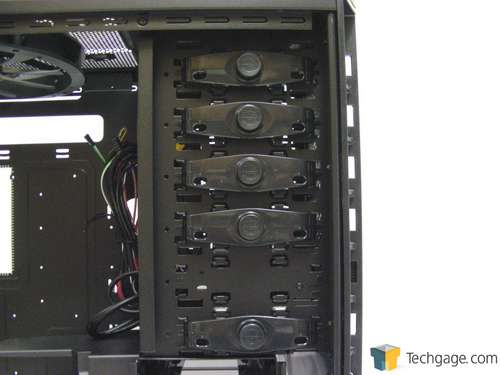 Down on the bottom is the adjustable, vented brace where the power supply will rest if one is installed here. The forward end of the brace can be slid out and locked into position with a thumbscrew to support today’s monster high wattage power supplies, but will extend over the area where the optional 120 or 140mm fan can be installed. This brace can be completely removed if two 120 or 140mm fans are needed with the power supply mounted at the top. 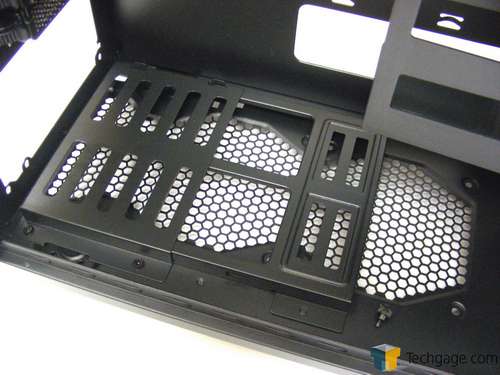 The motherboard tray features enough cable management options for just about all users with two large openings down the right side for power and data leads, one in front of each power supply area and two smaller openings at the top for the 12V and fan power leads if a power supply is not installed. There is also a large cutout in the motherboard tray to help with installation and removal of CPU coolers with back plates which has been trimmed with plastic to keep fingers happy. 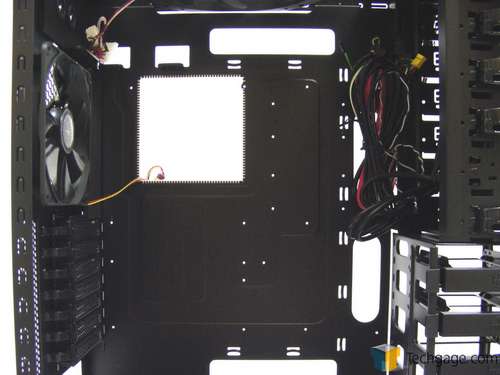 As promised, the tool-less retention mechanism for the expansion cards is laid out in all of its glory on the rear interior. There is also another view of the slot covers and a better look at the 140mm fan. 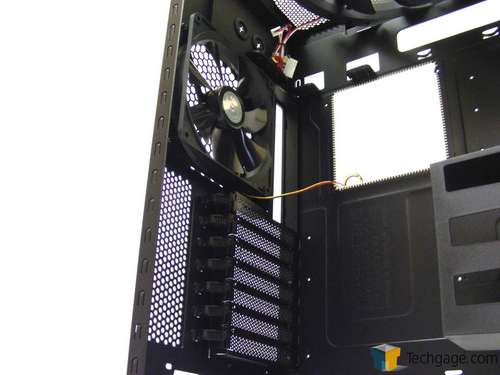 Finally, there is the top 230mm fan. The mounting points for two 120mm fans can be clearly seen but the third is kind of strange. It mounts towards the front but will be partially covered by the tray/fill port area on the top of the case, in turn using up part of the top 5.25″ drive bay. 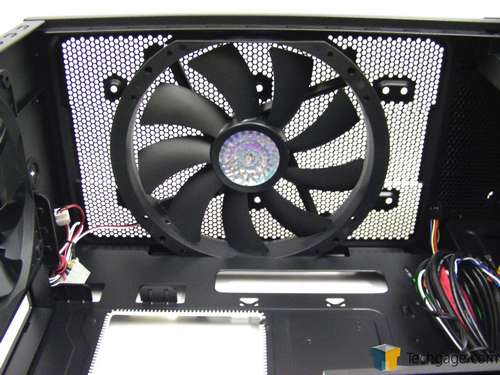 On the backside of the motherboard tray there is about 3/4 of an inch, or less than 2 centimeters of room. The loops in the motherboard tray where zip ties can be used to hold power and data leads in place will no doubt be a welcomed inclusion even with the extra space afforded by the raised area on the right panel. 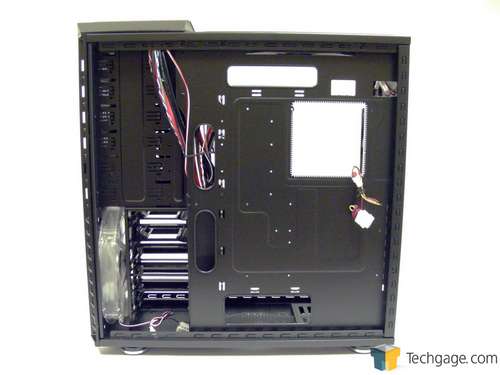 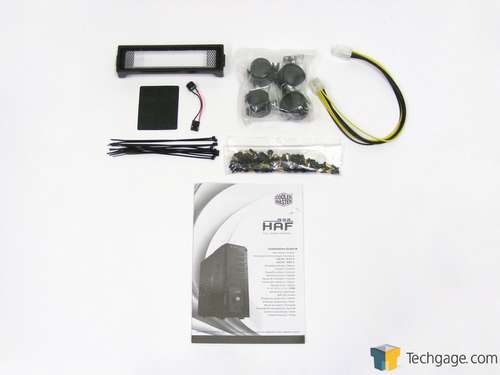 There is also the drive bay cover for those using the 5.25″ to 3.5″ converter, a speaker, some zip ties and a manual, but what is nice to see are some bells and whistles thrown in as well. To start with, there are some black adhesive pads that can be applied to the sides of any device installed into the 5.25″ bays to cover up the typical grey casing and help preserve the overall black external theme. There is also an 8-pin 12V extension cable but I’ll save my favorite little part for the build.

Looks and features are all well and good but they can only carry a product so far. The build and temperature testing is up next to see just what might make the HAF 932 so ‘advanced’.