In developing a chassis, companies like Cooler Master have to decide whether the focus will be on cooling or noise, because it’s extremely difficult to have a chassis excel in both. The Silencio 550 proves this, because while it becomes the quietest chassis we’ve ever tested, it comes at the expense of higher temperatures.

So, what -is- more important when choosing a case? If the answer is eye candy and thermal performance, it’s best to look elsewhere. If it’s functionality, expandability and a quiet system that’s wrapped up into a sleek, unassuming enclosure, then this may be the one for you.

The Silencio would look perfect being a workstation in a home office by day thanks to the classic exterior while providing just enough of a glimpse that there is more going on under the hood than your average case. Over-the-top styling just doesn’t cut it for me and this case keeps things on the down low. Even the Cooler Master logo on the front door isn’t overly visible until it is viewed in the right light.

Thanks to the removable top section of the hard drive cage, it can also accept just about any component thrown at it without getting too exotic. Extra long video cards or a ton of hard drives won’t be a problem and there is a fair bit of room to work in even though space is limited compared to some cases. Top USB 3.0 connectivity and an SD card reader certainly doesn’t hurt either, especially for someone like me who takes a ton of pictures or is constantly moving data to an external drive. 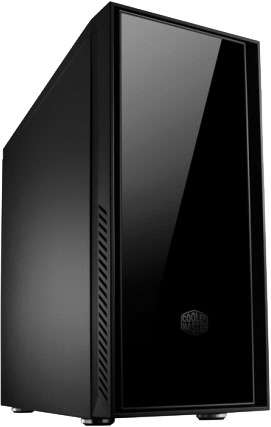 When it comes to system noise, this is the case to beat so far. Both the front and rear fan are extremely quiet while spinning at only 800 RPM and with a low noise CPU cooler, there’s no doubt that the system could be nearly silent although I question whether the CPU would be cooled well enough, because cooling in general is where this case falls flat.

I can understand that this isn’t supposed to be the go to case for out of this world overclocking, so maybe using a hot running card with a high overclock and large voltage increase isn’t fair. Those who intend on running a quiet system with all components running at stock frequencies will absolutely love it, but I would warn against running a mildly overclocked system with the stock fan configuration. I would even go so far as to warn against running a GPU that doesn’t exhaust the warm air out the back as adding any heat to the inside of this case could spell trouble.

Then there is the cable length. There are more models of various components on the market than ever before, so extra care should be taken to ensure the cables can run to any location inside the case. The USB 3.0 cable should certainly have enough length to at least run through one of the water cooling holes, although I would like to see another system put in place. Even something as simple as a notch cut into one of the PCI slot covers that allows the cable to be run through while leaving the cover installed.

As for the hot swap bay, I can’t guess what is going on here. The OS was installed with AHCI enabled and again, it’s the same install that was used during previous testing. It was able to read drives in all of the other hot swap bays except this one, and when the system is powered off and on, the drive is picked up – so it’s not the drive itself or the connections that are at fault. Hopefully this is just a case of a bad sample.

At the time this review was written, none of the major retailers have it in stock, but Cooler Master expects the case to retail for $99.

With the lack of cooling, short cables and a hot swap bay that doesn’t work as intended, I’d like to see the Silencio 550 re-released with some fixes seeing how all of the problems should be able to be cleared up without too much trouble. Until this happens, I simply cannot recommend this case.