To start out with, we will be testing the Eliminator by measuring the temperatures with the CPU idle as well as under 100% load. This will also be done with the system overclocked and the voltage bumped up. To test the Eliminator, we will be using our test system that consists of:

To get the CPU up to 100% load, CPU Burn-In will be used twice, one for each core. This will be ran for an half an hour at which point, the temps will be recorded using Core Temp Beta 0.93. 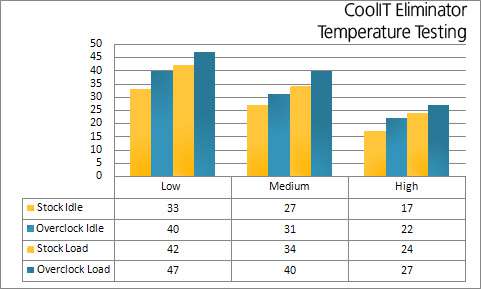 CoolIT has taken a rather unfamiliar cooling process and harnessed it into their products and the effort has truly paid off. They now have deals to work with many different OEM system builders, most notably Dell who they helped design their newest cooler for the XPS line of gaming rigs. When we look at the Eliminator by itself, it really shines as a CPU cooler. It is able to achieve sub ambient temperatures and does so with relative ease. While it gets rather loud on high, itâ€™s not obnoxious and for those that use headphones, this would be a perfect high performance cooler.

Even those who donâ€™t use a headset can appreciate the temps they will get with the Eliminator. I just wouldnâ€™t recommend running this thing on high in your bedroom but thatâ€™s ultimately up to the user. Itâ€™s only when you place it beside itâ€™s older brother that we can start to find shortcomings. It doesnâ€™t quite get as low of temps as the Freezone but it is cheaper, a third cheaper. The controller card is on the unit itself, allowing the userâ€™s case to look a bit cleaner and the three setting switch is a nice addition as well.

As we did with the Freezone, we love this product. CoolIT certainly has cornered the peltier cooling market and already, we are starting to see other companies crop up with coolers that use this same style of cooling. They say that imitation is the highest form of flattery. While I agree with this, CoolIT only needs to rest on the quality of their products. I highly recommend this cooler to anyone who is considering water cooling. As a water kit veteran, I would much rather deal with this and install it in less than an hour, instead of cutting tubing and installing everything piece by piece. If you can afford it, I would suggest the Freezone for the sheer power it has but if money is an issue, no one will go wrong picking up the Eliminator.

We walk away from the Eliminator very pleased. Itâ€™s performance cannot be questioned and for a budget liquid cooling option, you will not find a better deal. For ease of use, speedy installation and incredible performance, we are proud to award the CoolIT Eliminator a 9 out of 10. The only thing keeping this from getting an editors choice is the fact that we have used the Freezone. I am sure it sucks being great but still being in the shadow of your bigger brother. Keep up the good work CoolIT, and throw a back lit logo on the Freezone for the love of god!