Overall the installation of our test system went smoothly because we figured out a game plan beforehand, which is generally a good rule to follow when dealing with a SFF build since they can be quite involved depending on the layout of the chassis. In the end, all of the “supported” components installed cleanly without any alignment or clearance problems, even our long GTX 470 GPU.

The reason why I say “supported” components is that the Thermaltake Jing we usually use for case testing was too tall. After swapping out the cooler for a Noctua NH-C14 using a single fan mounted below the fin array in order to clear the side panel, we had to swap the memory as well due to the tall heat-spreaders on our Corsair Dominator kit. After all of that we were finally ready for testing, but it serves as a reminder of what was said in our editorial about building a SFF system – do your homework before you buy components.

A feature that didn’t receive its fair share of praise in the initial external view is the screw less retention clamp that holds expansion cards in place. Normally this is made of plastic and does a sketchy job at keeping cards steady, but this one is all metal and keeps them extremely secure. We were unable to even slightly wiggle the GPU, but there are holes to screw the cards in place for added insurance. 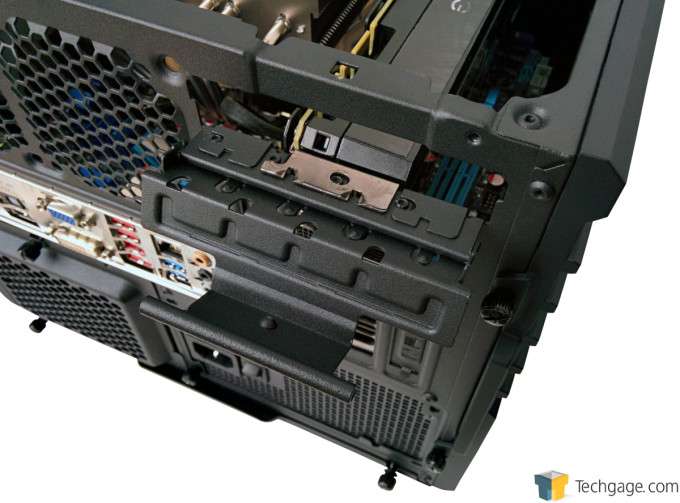 The fit and finish of this case is 100% Corsair, which made for a fast, trouble free build once we sorted out our components. We even did some mock-up testing to ensure there were no problems installing a 240mm radiator at the front, but when it came time to power the included fans, we didn’t have enough spare headers on our motherboard. This could be a common problem given the small footprint of the boards that the Air 240 supports, so including a splitter cable would have been handy, but luckily we had one laying around.

Before moving on to the temperature tests, here’s a quick shot of the main compartment with our test system installed… 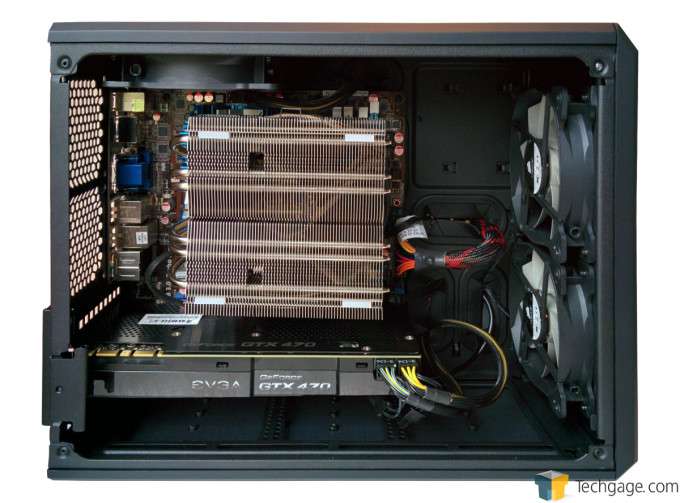 …followed by the messy drive and power supply compartment. It might look like a tornado blew through, but with no fans to worry about, there was nothing stopping us from hastily stashing cables back there thanks to the ton of room provided. Non-modular power supply owners rejoice! 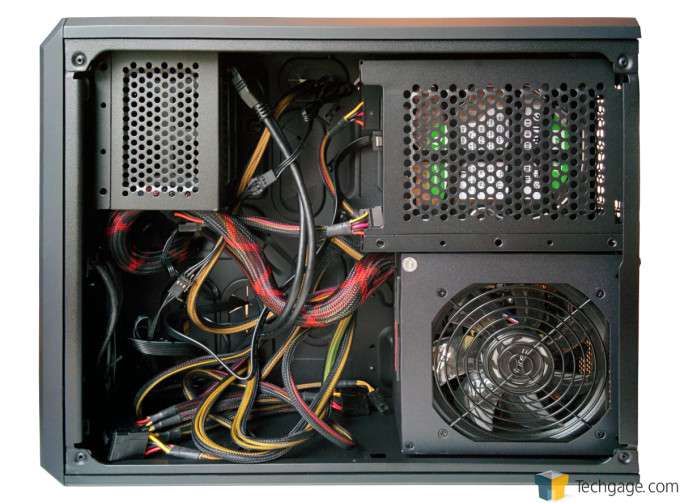 With 5.25″ drives dying a slow death, more and more chassis are being released without those drive bays. In the case of the Air 240, this appeared to help CPU temperatures since the cooler is directly in the path of the top intake fan. This resulted in a frosty overclocked load temperature of 61 degrees, which is well below the thermal limit of our i5 and even beats out some past testing with all-in-one liquid coolers.

Now before anybody freaks out about the GPU temperatures, let me explain that our card uses the reference cooler, which is nowhere near as capable as some of the custom, third party coolers we see on cards today. This, coupled with the fact that the GPU sits lower to the floor than in a traditional tower-style chassis, resulted in somewhat less airflow, hence the crash. This GPU is extremely picky when it comes to temperatures, which is why we continue to use it in our tests so that we can find chassis that truly have excellent airflow.

Unfortunately there’s no room to mount a fan below the GPU when using a mATX motherboard. We were able to place one under our GPU, but there’s no way to properly secure it. If additional GPU cooling is truly needed, there’s always the ineloquent option of securing the fan with zip ties. 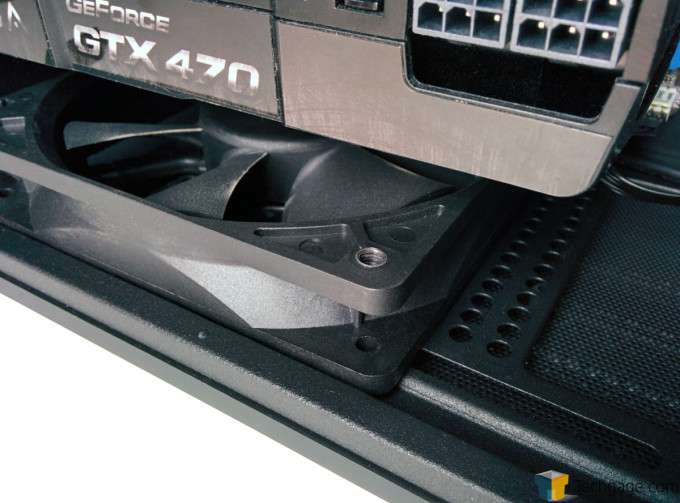 When it comes to system noise, the Air 240 isn’t loud, but the constant rush of air isn’t quiet either with the included fans running at 100%, which is how we do all of our testing. With the fans set to 50%, the system was almost inaudible, however, this did drive up temperatures, which is expected. If the chassis is packed to the brim with the maximum number of fans, we could see noise levels spiraling out of control, but that’s the price that some of us pay to keep our gear cool.

After a few speed bumps and some tinkering, we know what the Air 240 is and what it’s capable of, so we’ll wrap things up with our personal experience with this specialized chassis.