As the basis for a mITX system, you just can’t beat the Air 240 with all of the room allotted for multiple 240mm radiators. If you’re looking at the Air 240 as a mATX chassis, users should be very happy with the ability to install a single 240mm radiator at the front and lots of room for long GPUs, but keep in mind that there’s no option for a floor mounted fan if extra GPU cooling is needed. We’re sure this was done to keep the height and width of the Air 240 to an absolute minimum, but it would have been nice to at least have the option.

I’m not 100% sold on the method of accessing the hard drives. The rear external access for the 3.5″ bays looks good, but users will still likely have to remove the side panel to disconnect the power and data cables depending on how much slack there is. For the 2.5″ bays, the top cover needs to come off anyway, so it would have been nice to see another access panel for those as well. This might be a bit too much to ask for, but having hotswap drive bays all around would really make for effortless drive removal without having to open the chassis, but that would most definitely drive up the price.

Personally I don’t like the idea of stick-on case feet either. On a chassis with such a high build quality, these just seems like a cheap option. Even though most of us will just set the case in one spot and forget about it, one of the great features of the Air 240 is that it can sit in one of three orientations. If the case feet are removed often enough, eventually the adhesive will wear out, which might have made removable feet a better design choice.

All of this might sound negative, but the above points are just my opinion. Even though the Air 240 is a fantastic chassis, it’s my job is to thoroughly try out every item that hits the test bench so potential buyers know exactly what they’re getting into before they throw down some cash. I’d like to think that we do this better than any site out there, which is why we may come off as being overly critical at times. 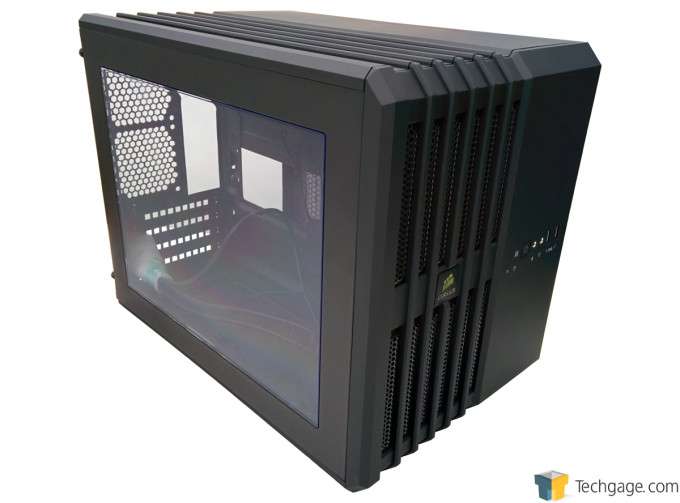 In all honesty, the only true gripe that I have with the Air 240 is that there are no screws included to secure the power supply and no splitter cable to run the included fans. Most power supplies come with screws anyway, but a splitter cable would be a welcome inclusion since mITX and mATX motherboards often lack the space necessary for enough fan headers.

I’ll admit that I was a little upset that we missed out on a review sample of the Air 540, but the Air 240 certainly makes up for it. While the Air 240 is still larger than some of the SFF chassis out there, few can handle the type of liquid coolers that it was designed for, or the number of fans that can be installed.

While the Air 240 has yet to hit retailers, one of the most popular online sellers has it listed as available on September 5th for a penny shy of $90 US, which is fantastic value.

Whether you’re building a new system (Steam Box anybody?), or just switching over your mITX/mATX rig you get a well built, uniquely designed chassis that has lots of options to create your dream system.