Corsair’s Crystal series is named as such because of its use of tempered glass, and as the top dog in the current lineup, the 570X sports that tempered glass on all four sides. Despite its delicate frame, the chassis proved great to build with, and as we found out, its beautiful aesthetics don’t hurt its cooling efficiency.

Does Corsair’s Crystal 570X cool as well as it looks? To find that out, I stress-tested the PC using AIDA64’s built-in system stresser, which pushes both the CPU and GPU to 100% usage the entire time it’s run. After booting the system up, and waiting for 10 minutes while it sits idle, AIDA64 and its stress-tester are started.

The build as tested can be seen below. It’s an X99-based platform, using Intel’s Core i7-6900K processor (overclocked to 4.2GHz), NVIDIA’s GeForce GTX 1080 Ti graphics card, and Corsair’s own Hydro H110i CPU cooler. What’s not seen in the build photo below is that the tested machine had an additional Corsair fan installed at the back, in exhaust mode.

At both the stock and overclocked speeds, this chassis helped keep the components as cool as I’ve ever seen them. It’s impressive that the overclock on the i7-6900K resulted in significantly higher temperatures, though the extra 0.1v pushed to it helped. Even at full tilt, the noise coming from this chassis was modest to the point of it being unnoticeable unless I was thinking about it (it wouldn’t be a nuisance when watching a movie).

It’s probably clear at this point that the Crystal 570X is a chassis with caveats. It’s up to you to decide whether or not those caveats are worth it. The biggest issue with this chassis is something outside of its control: dust. If you live in a dusty environment, expect to run a cloth along this chassis once a week. The front air filter will need to be tended to once in a while, as well, as three intake fans make it an absolute dust magnet.

That leads to another caveat: the fact that the glass panels need to be unscrewed to be removed. That’s a total of 16 screws for four panels. Fortunately, all of the panels are easy to remove, requiring just 15 seconds or so (while being careful). Again, this isn’t the fault of the chassis, but rather the design. Panels that are 100% glass can’t be designed like traditional ones are.

The last and only real downside of this chassis’ design is that cable management is a lot tougher than on most other Corsair models. Normally, the backside of a chassis can hide a huge bulk of the cables, and everyone’s fine with it because that side is a solid, opaque panel. Turn that panel to glass to reveal everything, and cable management is a bit tougher. Ultimately, it’s the bottom inside that’s the worst offender, but I don’t think it diminishes the aesthetics that much. 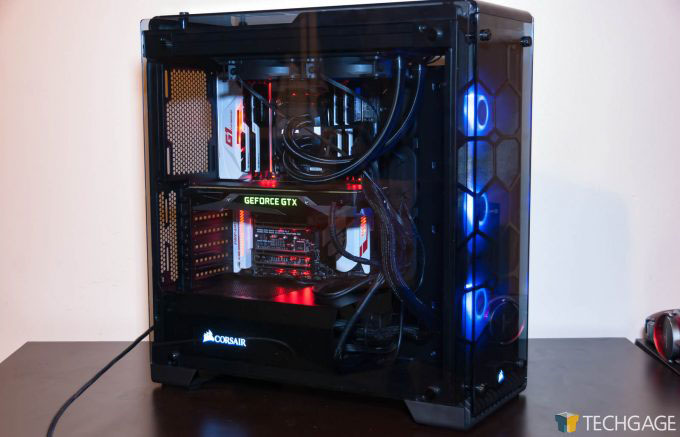 With those complaints out-of-the-way, let’s get into the good stuff – which is really easy to find. From an aesthetics standpoint, I consider the 570X a chassis that’s hard to beat. Who thought mere glass could look so good? If it wasn’t tempered, and tinted, it wouldn’t look nearly as sharp. The darker glass really help emphasize the LEDs that lace the PC, even the standard ones on the motherboard.

While it was a little difficult to keep cables looking neat, this chassis proved was a dream to work with. There isn’t a single issue that stood out to me when all was said and done. And, I hate to admit that I have good experience with the installation. You’ll notice that in some pictures here, an ASUS motherboard is installed, whereas in the final build (above), a GIGABYTE one is. This is because the original board had been transplanted from another test rig that had a dead PSU. Ultimately, it wasn’t the PSU that was dead, but instead the motherboard. That means I had fun installing most of the hardware twice over, but even then, I had no complaints working inside this chassis.

The fact that the 570X includes the three fans seen in front is notable, and appreciated. Most companies try to give you as few fans as possible, whereas the entire front is taken care of for you here. You’ll just need to slap one in the back (not seen above, but later added, as seen below), and the top (if not using an AIO that would include its own fans).

It’s not just that the chassis includes those fans, though; it also includes two fan controllers to change the colors, color modes, and of course, the speed.

Another perk is that a fan hub is included to install three more RGB fans, which is downright helpful if you have the plans to do that (it keeps the entire solution looking more elegant, too). The overall design is also good, with a complete lack of horizontally installed drive bays resulting in a ton of open space for the three front fans to do their work better.

Overall, the Crystal 570X is a chassis that looks fantastic, and will require a little more than the usual upkeep in order to retain a clean aesthetic. For me, that (minor) extra effort is rendered unimportant thanks to the fact that the final build looks so damn good.

The 570X retails for ~$179.99, and for all it offers, that doesn’t seem to be asking too much. Another version, called the 460X, retails for ~$129.99, and still includes the three front fans and both fan controllers. That chassis, which is slightly smaller than the 570X, lacks glass on top and at the back, keeping it just on the front and side. This culling means that the 460X weighs about 2KG less than the 570X (which can be a pane to lug, at 10.9KG).