Corsair’s Obsidian series of PC chassis represents the apex of the company’s offerings in the market. Innovative and user-friendly, they’ve also been overkill for most users. Now, though, the 450D has come onto the scene, intent on proving that the Obsidians shouldn’t be the exclusive preserve of users with deep pockets. Does it live up to its pedigree?

I’ll be reviewing the Corsair Obsidian 450D on a few key criteria: Ease of system installation; cooling performance; a subjective evaluation of its noise output characteristics; and a few miscellaneous subjective observations and comments about the chassis and its design and features.

I very much like having the standoffs permanently in place on the motherboard tray. This completely makes this phase of the installation idiot-proof; it’s impossible to lose standoffs by dropping them onto a heavy shag carpet, for instance. Plus having that central key standoff is pure genius. It’s yet another example of the intelligence of Corsair’s design and engineering staff.

Installing the rest of the hardware – the PSU, GPU, GPU cooler – and hooking up the cables to the system and its components did not reveal any nasty surprises. Overall, system installation is an easy affair. Indeed, the only thing that may require extra time and effort is cable management, but even this is aided by the Obsidian 450D’s grommeted holes in the motherboard tray. I know my build here doesn’t truly demonstrate this facet of the Obsidian 450D’s design to best effect, but this is not the fault of the chassis; I simply didn’t have enough time available to do a better job. And don’t let that mess of unused cables fool you; that “bundle of snakes” is unavoidable because of the fact that the PSU is from a time before modular cables came into vogue. Again, I’m absolving the 450D for my less-than-ideal job at cable management. 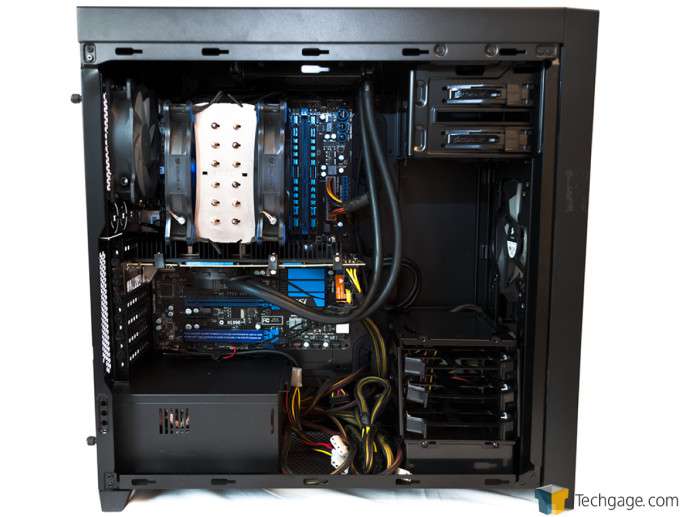 But things aren’t perfect with the Obsidian 450D. If there’s a nit to pick with this chassis, it’s the lack of fans in the roof section. Corsair might argue that including a fan or two at that position would drive the price for the Obsidian 450D up, but it’s easy to justify the added cost because of the enhanced value and performance benefits having fans up top would give this chassis. It’s an interesting decision by the company, in my opinion.

Also noteworthy as a bit of a caveat is the suitability of the using the roof to mount a 3 x 120mm/3 x 140mm radiator, especially thick ones. There’s insufficient room to fit such big radiators up there, particularly if you need to install 5.25″ optical drives. Visual inspection also suggests that push-pull set-ups with rads bigger than 2 x 120mm/140mm might be a no-go as well.

Finally, there is a strict limit as to motherboard compatibility in the Obsidian 450D. Corsair touts it as the smallest Obsidian chassis that can fit an ATX motherboard. That means EATX (and larger) motherboards cannot be installed in the 450D. Micro-ATX and Mini-ITX systems, though, are compatible.

First, though, we must established some controls by listing the components of the test system. This is the same system I use for all of my Techgage reviews:

To test cooling performance, I will use the OCCT CPU stability test program to generate maximum CPU load and temperatures as well as MSI Kombustor for the GPU temperature testing. Ambient temperature will be kept constant at 72°F/22.22°C.

A preliminary note about thermal testing: A PC chassis being reviewed ought to be in as close to stock configuration as possible. That means I won’t add fans to the system (other than what comes with certain components’ cooling systems). Also, per usual practice outlined in previous cooling equipment tests (like my most recent one, I keep the ambient temperature at 72°F/22.22°C during testing. I’ll also use the same exact torture tests to put the CPU and the GPU under maximum load conditions. I made sure to run OCCT for the CPU and MSI Kombustor for the GPU while the test system was installed in an open-air Danger Den Torture Rack test bench first, before transferring the components over to the Corsair Obsidian 450D. 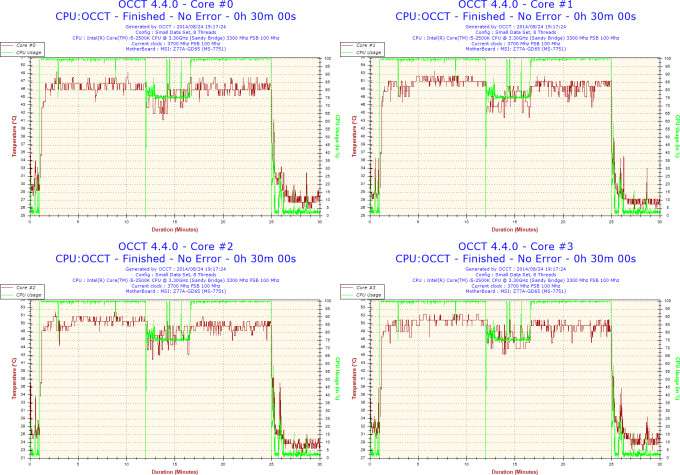 But how does the GPU’s thermal performance compare? 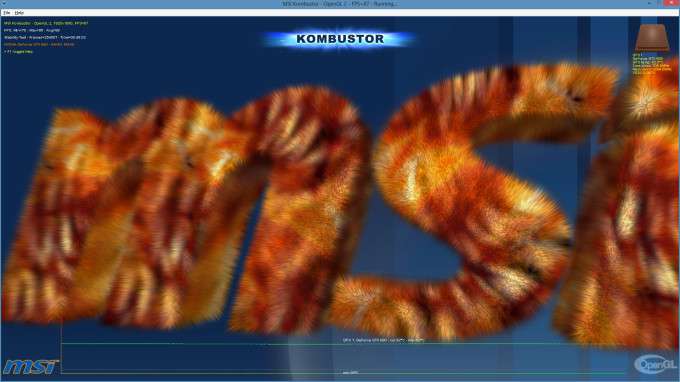 As far as noise output is concerned, the Corsair Obsidian 450D makes what was an already quiet system even quieter. Even with it beside me, I couldn’t hear any noise output from the system.

Overall, I’m quite impressed with the Corsair Obsidian 450D. As I’ve stated before, I’ve long been a fan of the black, monolithic aesthetic. Moreover, Corsair’s designers just continue to wow me with their attention to details. I’ve already mentioned the SSD sleds on the rear of the motherboard tray. Another noteworthy detail, all of the cables in the chassis are dressed in black. This apparently simple detail goes miles towards endowing the 450D with a visual uniformity; cables apparently “disappear” against the all-black sea of the chassis’ interior. It’s a simple way to enhance cable management, really, and it’s such an elegant idea it makes me wonder why other chassis manufacturers never thought of doing it this way from the beginning.

Another nod to better cable management is the approximately 2.5cm (0.98″) gap between the rear of the motherboard tray and the right side panel. This space is ample for even that fat bundle of 24-pin motherboard power cable as well as other bunched-up wads of extra cable lengths. As far as I’m concerned, Corsair is the foremost chassis designer when it comes to facilitating cable management. After all, it introduced the grommeted openings in the motherboard tray with the Obsidian 800D/700D all those years ago, as well as the SATA backplane (in the 800D). The 450D shows that the company has not rested on its laurels at all.

Let’s move on to some final thoughts.