How much performance can be had out of a super-small PC? If we base our opinions on Corsair’s ONE i164, the answer is a simple “a lot“. Coming in at 15-inches tall, this PC bundles not just Intel’s eight-core i9-9900K inside, but also NVIDIA’s top-end GeForce RTX 2080 Ti. We recently battered the i164 with an obscene amount of testing, so let’s explore our findings.

Page 1 – Introduction, A Look At The Corsair One Hardware

When Corsair announced that it was releasing a prebuild PC in 2017, it didn’t seem like that much of a surprise. Part of the reason is that Corsair has been a market leader in PC components for ages, and it develops so many different products, that building its own PC had been a running joke in the industry for a while.

Corsair certainly isn’t the first component vendor to try its hand at a prebuild, but after thoroughly testing the ONE i164, we can honestly say this is one of the best executions of a prebuilt we’ve seen. It’s custom-designed to be as efficient as possible, holding nothing back on performance – just noise-levels. 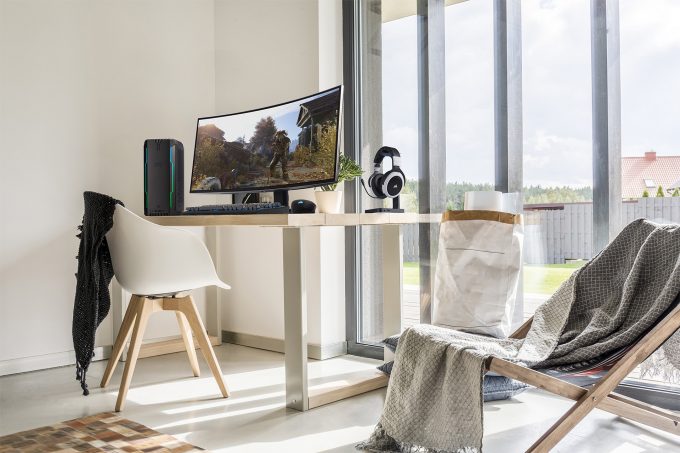 We of course have a big do-it-yourself focus at Techgage, but prebuilds remain not just interesting for us to compare against our own rigs, but also to see what’s out there for those who would rather not go the DIY route. Even if you are a DIY fan, Corsair’s ONE PC offers perks that are difficult (or perhaps) impossible to emulate in a personal build. It’s amazing what custom machining can do!

A Look At Corsair’s ONE i164 Compact PC

It’s nice to see that this cylinder-style compact PC design has caught on, because it’s great to be able to have a desktop that’s small (and quiet) enough to sit on a desk, instead of under it. Another key ingredient would be the performance, and this i164 model sure has it. The CPU under-the-hood is Intel’s eight-core Core i9-9900K, while the GPU is NVIDIA’s top-end GeForce RTX 2080 Ti. Likewise for both the CPU and GPU, there’s plenty of memory for the high-end creator or gamer.

The size of the Corsair ONE is impressive to the point that we can’t stop admiring how small it is in comparison to our regular rigs. We have five test PCs, each with a different chassis, and all of them are much larger than this ONE. Here’s an example of Corsair’s prebuilt next to our DIY test PC that includes the same 9900K CPU and 2080 Ti GPU: 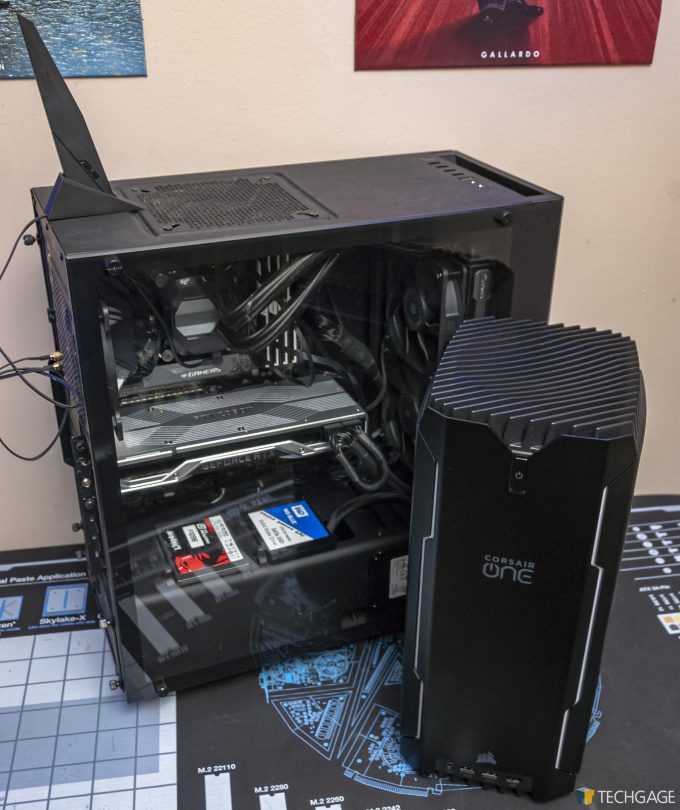 When Corsair sent us the ONE, we knew what there was to know on paper, but not what there was to know in practice. We’ve taken a look at prebuilts before, so even though we knew this particular model had high-end hardware, we expected that its size would mean performance would be degraded a bit versus a regular DIY rig. Fortunately, our seriously in-depth testing has proven that not to be the case.

We’ll talk performance and things like temperatures later in the article. For now, let’s discuss what’s most pressing: the actual hardware:

At the front of the PC is the power button, found up top, and dual USB ports at the bottom, along with an audio jack and HDMI port. When Corsair released the original version of the ONE, it touted being “VR Ready”, but its HDMI port was still somewhat inconveniently placed at the back. On this updated model, it’s made much more convenient in the front.

Because this is a Corsair product, the ONE of course has RGB, but all things considered, it’s what we’d argue to be a tasteful amount. A “light pipe” can be found on both sides of the front, and by default, our sample came with a solid blue color (not the blue/green scheme seen in a lot of marketing). We’ll take a look at the iCUE software in a short bit, which is where you configure this and other Corsair-specific lighting in your rig.

Both the CPU and GPU in the ONE are liquid-cooled, with the CPU located inside the left door, and the GPU found in the right. While the CPU is cooled with a single-size radiator, the massive NVIDIA Turing GPU is being cooled by a radiator twice the size. While Corsair coolers are the ones (obviously) chosen for the duty here, they are not standard models, so you can’t just buy a replacement off of the shelf.

Looking at the back of the ONE, we find an interesting placement for the DisplayPort ports – right next to the power supply. The ITX motherboard found in this rig is a customized MSI Z370I GAMING PRO Carbon AC, which also uses a custom EFI, so the latest version can’t simply be downloaded from MSI’s website.

Getting inside of the PC is easier than we expected, but that assumes you know the basics. We’re always a bit wary of diving in without looking at the manual first, but this was actually straight-forward. A square button at the top can be pushed in, which will raise the PC’s only exhaust fan upwards so that you can pull it off of the top. Once the fan connector is unplugged, the entire piece can be removed.

When we peer into the PC, we can instantly see the heavy amount of customization done inside. An add-in PCIe passthrough card allows the GPU to be routed through the opposite side of the motherboard. The only hardware that’s easily accessible for removal is the DDR4 memory, but unless a stick somehow dies, it probably won’t need to ever be touched. This ONE PC includes 32GB of memory, and that’s what the MSI motherboard happens to top-out at, thanks to only having two DIMM slots.

If you don’t mind going through more effort, the GPU can be removed to access the NVMe SSD on the back of the motherboard, and the included 2TB HDD could technically be replaced by an SSD. Even the CPU itself can be replaced, which would be useful if the next-gen desktop chips happened to work on the same Z370 platform.

Overall, there’s nothing much we can critique the design over, because every caveat is the result of the fact that Corsair is packing a lot of hardware into this small chassis, and not to mention high-end hardware. When you buy a PC like this, you don’t expect DIY levels of customization.

The fact that the ONE uses a single exhaust fan is worth highlighting, because if the one in your ONE happens to die, it’s nice to know that replacing it won’t be much of a hassle (aside from not being able to reliably use the PC while it’s fanless, of course).

The only critique that comes to mind is a lack of air filters that are easily accessible for cleaning. As far as we could tell, there are no filters at all hiding between the radiators and the side panels. This does mean that a slow build-up of dust is inevitable. Opening up the system and giving it a burst of compressed air every now and then will be important. Just avoid using compressed air from the outside, as you’ll end up forcing dust bunnies inside the radiator, clogging it.

With a look at the hardware out-of-the-way, we’ll head on into the next page with software in our sights.

Page List
Top
1. Introduction, A Look At The Corsair One Hardware
2. A Look At The Software
3. Performance & Temperature Testing
4. Final Thoughts
Forward >>