by Rob Williams on May 1, 2006 in Miscellaneous

Without a doubt, DDR2 memory is becoming increasing popular, especially with an AM2 launch coming up. Corsair has given us some memory that’s worth talking about. While it’s only a 1GB kit, it’s the fastest 1GB kit you can get your mitts on.

In the memory market, there is a great amount of competition. So, how is a company to handle this competition? Well, they release two new extreme high-end kits of course. At this years CeBit conference, Corsair unveiled their 1GB DDR2-8500 kit which we are looking at today. In addition, they announced their ultra-fast and dual spec 2GB DDR-550 kit, which you can expect a review of next week. 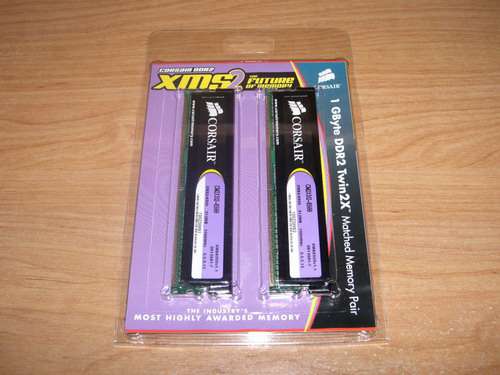 Of course the thing that stands out most about this kit is the fact that it’s stock speeds are a staggering DDR2-1066. This is currently the only memory kit on the market that allows a 1:1 ratio with your Extreme Edition processor. Before we get into the nitty gritty of the specs, let’s first check out the modules themselves.

As usual, the modules arrived in a clear blister pack. Unlike some companies who use the same blister pack for all their modules, Corsairs look unique depending on the type and series. The DDR2 “non-pro” series has a pure black aluminum spreader. The modules themselves are quite light due to the spreader, especially being compared to their PRO heatspreaders. 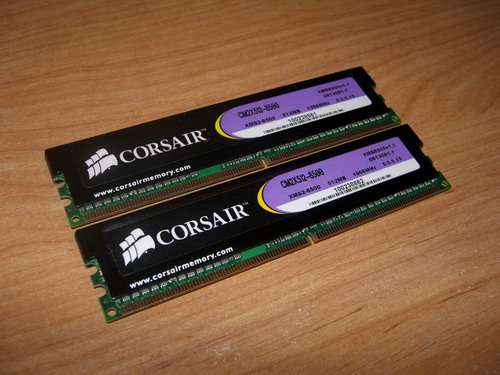 While these are not the flashiest spreaders out there, I really like the pure black look. The only way they could look better was if the PCB was also black, but that’s unlikely to happen. The labels on each module gives all of the info you would expect, including the timings, speeds, density, revision and model number. Overall, these are very clean looking modules. Corsair doesn’t spoil the clean look with a “Void warranty if you remove this” sticker either, which is nice.

Being the bleeding edge speeds that these modules are, I didn’t expect super tight timings. Actually, these modules share similar timings to the 2GB 6400PRO kit, simply with a slightly more loose tRAS. Though 5-5-5-15 looks high, for modules of this speed, those high timings may not even matter. I did not open the modules to see what chips are used, because FBGA chips are notorious for coming off with the spreader. Corsair has told me that the chips are Micron D9GMH. Though these are not the D9 fatbodies that everybody loves to refer to, these D9’s are legendary in their own regard. 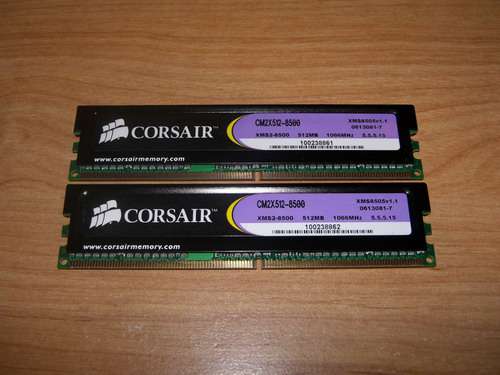 These chips are very similar to the D9GKX that were used in the Super Talent PC2-6400 kit I took a look at a few weeks ago. Those modules proved extremely friendly in terms of overclockability. They also *loved* any voltage you wanted to through at them. The only real difference between the chips used between these two modules is that the D9GMH are clocked for 333MHz, as opposed to the ones used in the Super Talents that were clocked for 400MHz. Of course, it may seem funny right off that these faster Corsair use slower chips. The basic reason behind this is that the 333MHz are fully capable of the required DDR2-1066 speeds, and cost less. That in the end means cheaper modules for you.

Using modules of this speed of course requires the more than usual voltage. For stock speeds, 2.2v is the required amount of juice, which is still quite manageable. Though I didn’t risk a finger, I hear that these chips can get *very* warm, so having a good 120mm fan pointing towards the modules will help keep things cool and may even help your overclocks.