by Rob Williams on February 26, 2007 in Miscellaneous

If you are on the lookout for an extreme overclocking kit but don’t want to make a huge withdrawal at the bank, then the DOMINATOR 9136 kit will be worth your consideration.

The memory market is unique. On the GPU side of things, it’s always bustling with new releases to drool over, but memory is far different. When we moved up to DDR2, the only thing to get excited over were faster speeds. So what can memory companies do to get people excited about their product? Release a great looking and efficient, heatspreader of course. Corsair caught the attention of many last year with the launch of their DOMINATOR heatspreader. At the same time, they announced their top end kit, the PC2-8888 with very tight timings of 4-4-4. That retained the top spot in their product line up until this past CES, where they announced their PC2-10000 kit.

The kit we are taking a look at today is placed in between the two, although it has less tight timings than the 8888. Because of this, the 8888 kit still retains a higher spot and should prove faster in all respects when compared to the PC2-9136 kit that we have on hand.

Before we jump into the specifics, we should touch on what makes the DOMINATOR so special. Heatspreaders have a simple purpose… to dissipate heat. This is primarily beneficial when overclocking, since stock speeds tend to not heat up the memory that much, unless purposely stressing them for hours on end. Overclocking is a big hobby for many, which is why heatspreaders caught on so fast. However, all spreaders on the market have one thing in common… they touch the memory chips and nothing else.

Go ahead, bookmark this review, shut down your PC, haul out your DDR2 and see what I mean. I’ll wait. *twiddles thumbs*

Great, now that we got that out of the way, we can move on. With heavy overclocking, heat plays a huge role, so the faster and more efficient heat can be dissipated, the better. This is where the unique design of the DOMINATOR comes into play. As you can see in the diagram below, not only do the FBGA chips have a heatsink on them, but also the the tip of the PCB. Then layered on top of these is the actual DOMINATOR heatspreader. 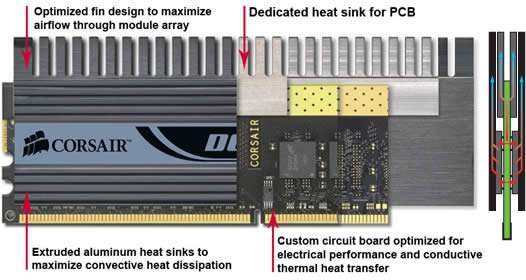 This is all paired with the fact that the modules use a custom PCB which was designed specifically for performance and heat transfer. Essentially what this should result in is better overclocks without the use of a fan. But as most people know, a fan will always be required for huge overclocks. It’s similar for CPUs. You wouldn’t dream of overclocking with a passive cooler; You’d be asking for trouble.

Along with the release of the PC2-8888 kit, Corsair also launched their Dominator Airflow fan, which is essentially three small quiet fans paired together to maximize airflow coverage over the entire area. These are not required to run stock speeds, but are highly recommended for overclocking for the same reason mentioned above. Sadly, this fan is only included with the 8888 and 10000 models. You can purchase it separately though, for $20. That’s fine though, as the 9136 kit retails for around $430 while the 8888 kit is closer to $600.

But, enough about the modules that we are not dealing with today. Shortly after the 8888s were released, Corsair followed-up with a higher clocked kit with loose timings, so that it could be priced better for those who don’t want to spend more than a house payment on a new kit of ram.

What we are dealing with are presumably Micron D9GMH chips, while the higher kits likely use the higher binned D9GKX. Does this mean that this kit won’t be as overclocking friendly? PC2-9136 equates to 571MHz frequencies, aka DDR2-1142. Being that high already, DDR2-1200 is not outside the realm of reason with a little extra voltage. Speaking of… stock voltages are 2.1v, not bad at all given the frequency. The timings are 5-5-5-15, which seems loose but isn’t when dealing with these frequencies. To hit 4-4-4 at anything 600MHz and over, you will require a -lot- of voltage, which isn’t safe by any means.

You are probably interested in packaging… so here we are. Given the fact that these spreaders are huge, so is the plastic wrapped around them. 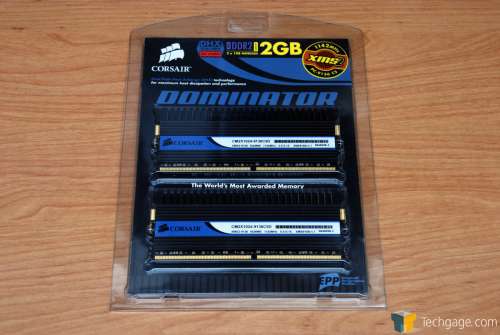 These are great looking spreaders any way you look at it. I have high respect for anyone that slides away from the incredibly dull green PCB and uses black instead. For an enthusiast part, it adds a lot, and suits the spreaders themselves perfectly. 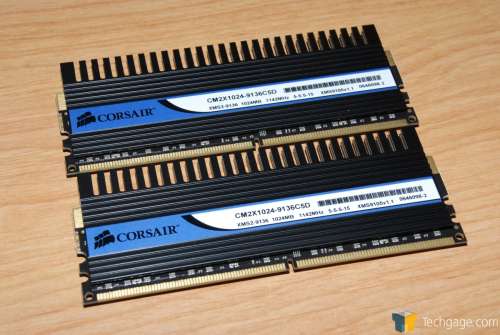 Close up to the sticker we see revealed the model code, frequency, timings and revision number. The only thing that is missing here is the required voltage. If you use the EPP feature, that will be automatically set for you inside the BIOS. 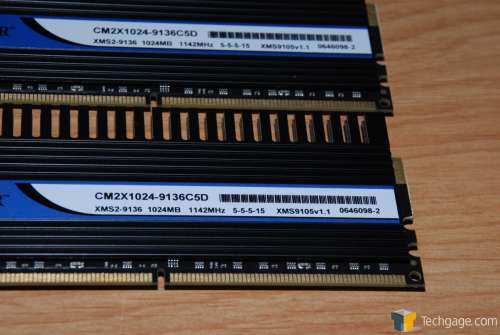 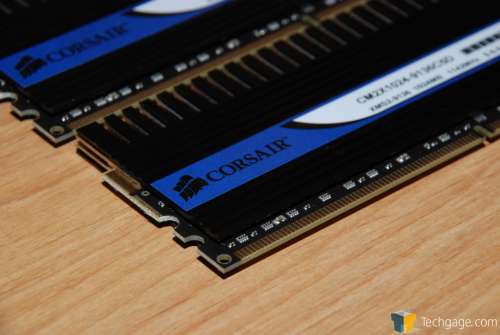 Looking top-down, you can see how the heatspreader comes together. It may double as a comb if you are in a bind. 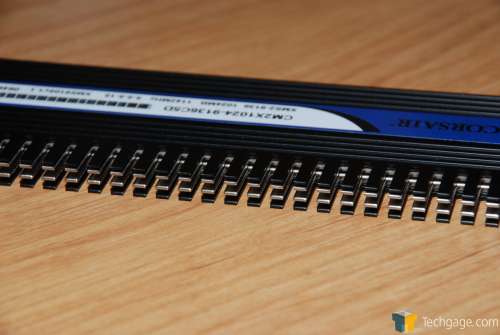 Lastly, here is the module when compared to OCZs latest Flex. The Flex is by far the taller module, thanks to the fact that it accepts tubing for water cooling. 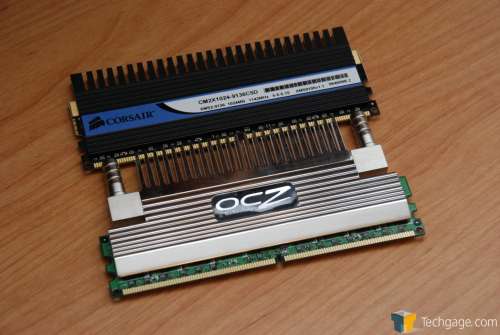