by Rob Williams on February 26, 2007 in Miscellaneous

If you are on the lookout for an extreme overclocking kit but don’t want to make a huge withdrawal at the bank, then the DOMINATOR 9136 kit will be worth your consideration.

Since this is my first RAM review in a while, I am re-evaluating how we can make these reviews better overall. If you have recommendations of benchmarks you’d like us to consider or different methods of testing, please let us know and we will look into them.

That said, starting in this review, we will be comparing our overclocks of the memory being reviewed alongside other recently evaluated sticks. These graphs include benchmarks with each kit of ram at DDR2-1000 4-4-4-12-13 2.1v along with each kits own top overclock. While the DDR2-1000 results should not vary much, the top end overclocks will, given that each kit will top out differently.

Additional kits will be included as time passes. I had other kits on hand, such as Kingstons HyperX PC2-8000, but they did not give realistic results. I assume they are not fully compatible with the 680i motherboard.

In our first comparison, EVEREST, only the top overclocks where used. It’s no surprise that since the Dominator 9136 had the top overclock, it also has the top result. It scales just as expected. 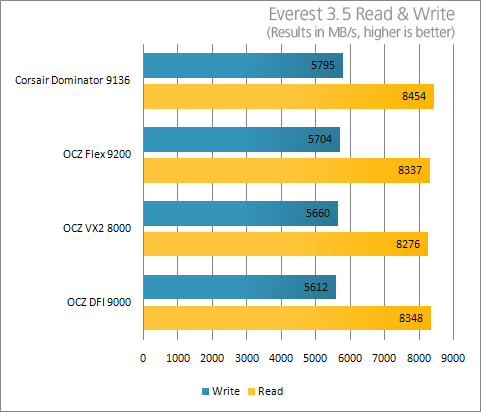 The Dominator showed its true colors here, claiming the top spot for our highest overclock. The 500MHz settings proved a little different though, with the OCZ VX2 easily taking the crown. 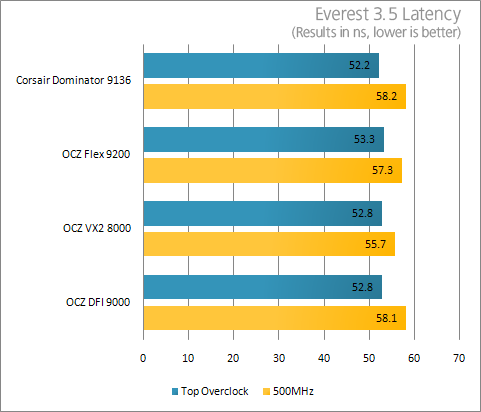 Not much is a surprise here. The Dominator proved the best overclocked time, thanks to the slightly higher CPU frequency. As far as 500MHz goes, the VX2 once again beat out the other kits by a smidgen. 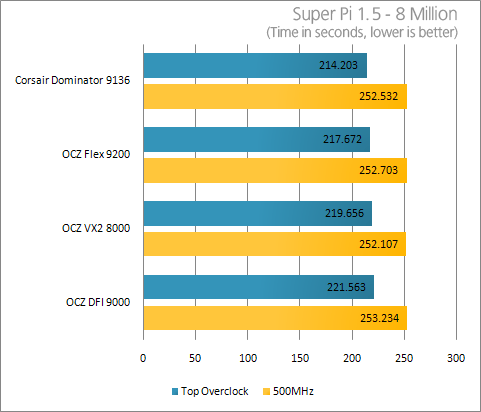 As with most top-end memory, this kit is not inexpensive. It retails between $425 and $450 on various websites. Despite its high price, it still falls in line with other similar kits on the market. The OCZ Flex PC2-9200 kit for example costs around $40 more than this Corsair one. However, there are many kits (Corsair included) that can be had at PC2-8500 speeds for over $100 less. One thing is for sure, the kit we had on our test bench today is amazing. It offers plenty of overclocking ability, as was evidenced earlier. DDR2-1270 stable is one nice feat.

I don’t doubt for a minute that there is more headroom here as well, if you are able to go beyond 2.5v. Most huge overclocks require between 2.7v – 2.8v, so DDR2-1300 stable would not be a surprise to me, with even higher (but less stable) overclocks possible as well. As it stands, the fact that 635MHz was stable at a still modest 2.5v impressed me.

The only real downside is that this kit does not include the airflow fan, but luckily they can be purchased separately for $20. I have come to enjoy using this as opposed to a usual 120mm, for the simple fact that it’s easier to mount. I had originally thought that having three mini-fans constantly going would be noisy, but it’s not. I can’t even hear it overtop my water cooling fan, so I recommend that accessory to anyone, regardless of whether you have this exact kit or not.

That said, price won’t be taken too heavily into consideration here as it would if there were equivalent kits out there for a much lower price. At this speed range, this kit is much lower priced than OCZs Flex, and I managed to clock it higher. In the end, I am impressed. If you don’t mind paying a premium for some of the fastest memory on the market, this is a fantastic kit. If you are more of a novice overclocker or an enthusiast who would like to save money, there are many other budget-conscious kits out there that would better suit you.