Have a desire to add a bit of ‘bling’ to your PC, but fear being ridiculed for it? Well, there’s no better excuse for bling than with Corsair’s AirFlow Pro add-on for the company’s AirFlow 2 memory cooler. In addition to offering a hypnotizing light-show, the AirFlow Pro can also keep you informed on your memory’s usage and temperatures.

What’s the first thing that pops into your head when I say Corsair? How about memory, power supplies, chassis, water coolers, air coolers, audio or solid-state drives? All are correct, so take your pick. You will be hard pressed to find any enthusiast out there who doesn’t at least want to own one of Corsair’s products. The company started turning out some serious high-end enthusiast memory in 2002 and apparently hasn’t looked back by branching out into nearly every other aspect of computer hardware.

On the table today is likely one of its lesser-known accessories, the Airflow Pro. This LED-based display unit will show memory access for up to 6 modules and read memory temperature in real time, reporting it as either green, yellow or red. The only catch is, running it is a three part purchase process.

First, it requires Dominator or Dominator GT memory modules that support Corsair’s DHX Pro technology. These modules have connectors on them that allow the AirFlow Pro to gather information. Second, it also requires the AirFlow 2 (1 will not work) active cooling fan assembly as a mounting point. As you can see, it is a costly piece of kit for those starting from scratch.

The AirFlow Pro itself does not seem like much. Most of the unit is made of black plastic with a thin plastic covering running down the center. In the covering are transparent holes for the LEDs to shine through. 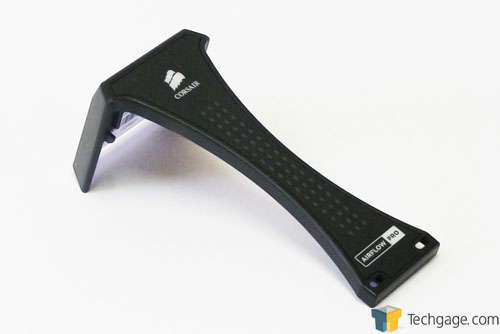 Flipping it over shows the black PCB where the backside of the LEDs are found along with the 4-pin power connector and 6 headers for connecting the monitoring cables to the modules. There is also a white header next to them, but the purpose is not clear. There is another header on the other side of the PCB at the opposite end. Again there is no mention of what this is used for so one can only guess testing or calibration. 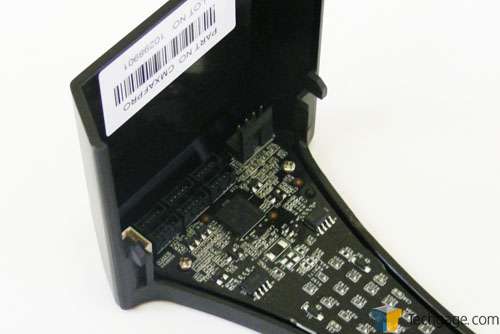 Included with the AirFlow Pro are the 6 monitoring cables, a 4-pin to 4-pin Molex connector to power the unit, 2 riser thumb screws, two additional standard thumb screws and 4 washers that go in between both sets. There are no instructions included but the installation guide can be downloaded directly from Corsair’s website. 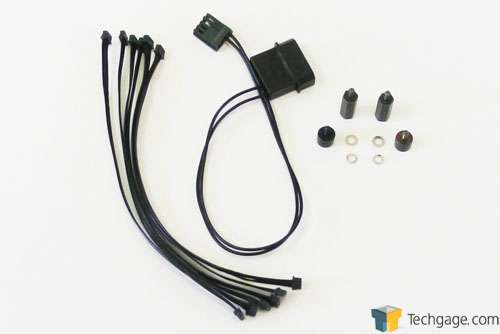 Never having used a unit like this, I was curious to see how the installation would go and how well it would work, so let’s jump into that now.

The initial assembly was done outside of the case in order to show what the AirFlow 2 and AirFlow Pro look like together. This is not the way to install the components inside of the chassis but this gives a better idea of the end result.

Being the typical guy that I am, downloading the installation guide was not an option, nor was it needed. Everything was so simple. The first step was to remove both thumb screws from one end of the fan assembly. These were replaced by two washers and the riser thumb screws on which the AirFlow Pro rests. 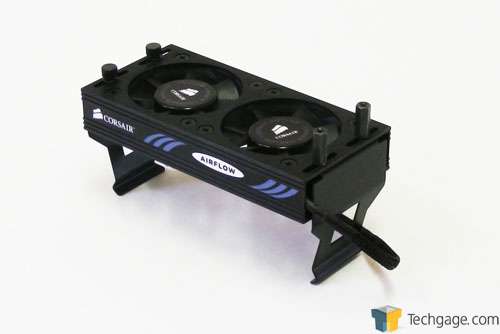 The monitoring and power cables were connected and the unit placed on top of the fan assembly with the plastic catches on one end keeping it in place. Finally, the standard thumb screws along with the last two washers were screwed down into the risers to complete the job. 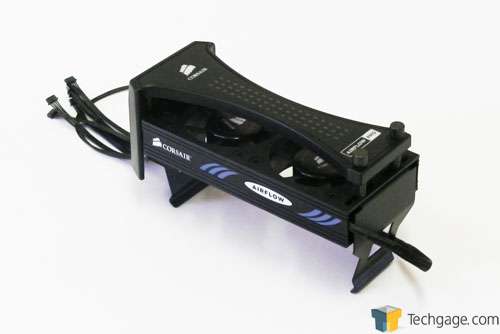 When it came time to transfer everything over to the chassis, I had to bite the bullet and download the installation guide to ensure things were done in the proper order. The monitoring cables were connected to the DIMMs, the DIMMs were installed and the cables routed through an opening in one of the stands of the AirFlow fan assembly. The fan assembly was secured in place, all connections were made on the AirFlow Pro, which was then secured. 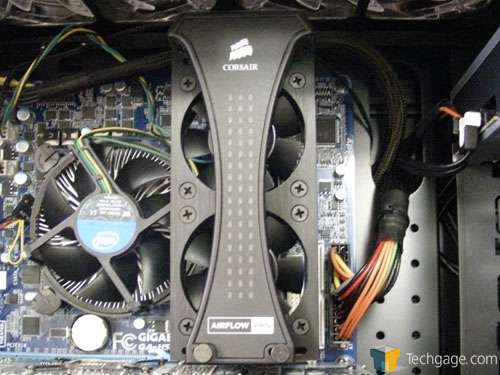 So that’s that. After only 5 minutes, it couldn’t have been any easier if it installed itself, so that just leaves testing. The testing of this product will be different than most others we look at. Instead of quantifiable data, I am going for a ‘does-it-work?’ approach.

I’m happy to say that it sure does! As soon as the system was powered on I was left with a ho-hum pre-programmed display followed by a handful of LEDs that stayed solid. I was a little let down to be honest, but after the POST beep, it was like fireworks! LEDs were firing left and right and the temperature indicator showed green, so it was smooth-sailing from there. 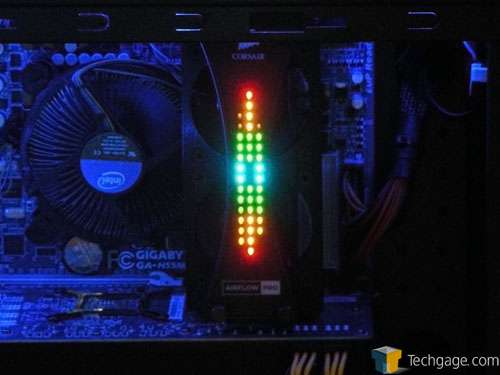 To get an idea of just what the light show looks like, here is a small video of the system starting up:

I’ll admit that at first, I wasn’t sold on the idea of the AirFlow Pro. It’s very flashy and not really my style. After putting in some time, it still isn’t my style but it has grown on me.

It adds some flair to any rig without being too over-the-top and intrusive, and the easy installation was a welcome change from some of the convoluted mounting instructions I have worked through in the past. It should also look right at home in most enthusiast chassis since many of them ship with the inside painted black.

The AirFlow Pro can be found for just shy of $50 Canadian or US, so should fit within most budgets. However, there are two other components needed to utilize it. If starting from the ground up, the price tag can reach nearly $200, and that is at the low-end of the scale taking into account a 4GB Dominator kit and the Airflow 2. Luckily, this is a niche product with practical applications and enthusiasts usually have a fair bit of money to burn. I can see many eating this up.

All in all, the AirFlow Pro a great product and is certain to turn heads.