In a market with over a billion (give or take a couple) different chassis for under $100, finding the “right one” is easier said than done. Fortunately, there are some vendors where you pretty-well know by default that their product won’t let you down. Corsair is one of those, and we’re here to see if its Carbide 300R lives up to those high expectations.

The 300R might be an affordable chassis, but certain key features haven’t been skimped on. Let’s start with the motherboard tray, which has a huge open area for installing a CPU cooler after the board has already been installed. This, oddly enough, is a highlight to me. I’ve used many high-end chassis that have had open spaces in the motherboard tray for this purpose, but almost always the space doesn’t align properly to the back of newer motherboards, so the open space is rendered useless. With the 300R, that just won’t be a problem. 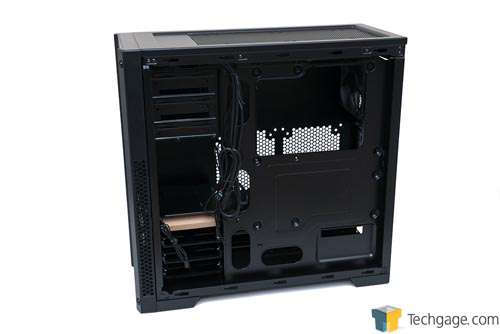 There are only a couple of cables the chassis includes (seen hanging down); USB 3.0 internal header, HD Audio and ATX chassis connectors. This is less than what we see on higher-end chassis, but given the size of this one and its overall goals, this is suitable. It would have been made perfect if USB 2.0 ports could also be found on the front-panel, but we can’t have it all for $80.

Putting that side’s door back on, we make way to the other side to see all of what Corsair’s done with the interior. In this first shot, we get a glimpse at the 4x internal drive bays, all of which have proper holders – and all of which support SSDs. The box seen here includes various accessories, namely screws and cable ties. 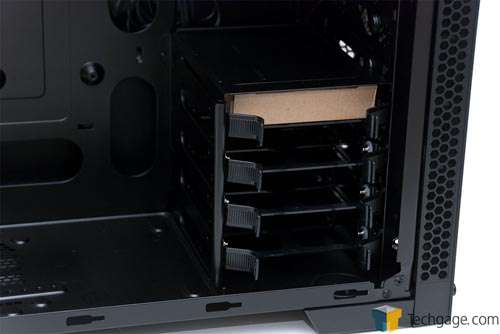 Up top are the 3x bays for ODDs (or whatever peripherals you might have to fill them). Corsair has a latching system in place that allows you to install any drive without the use of screws (a fad I’m very glad caught on). 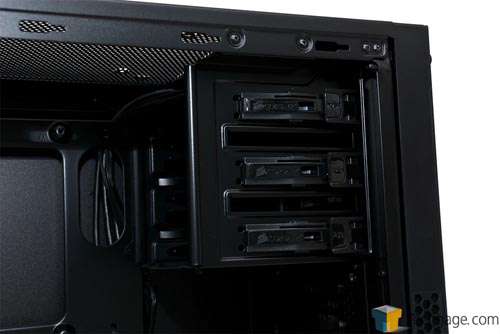 Between the bay areas is the included 140mm fan. Its job is to pull cool air in while remaining as quiet as possible. While the 400R has an LED fan in this area, the 300R keeps things in total blackness. 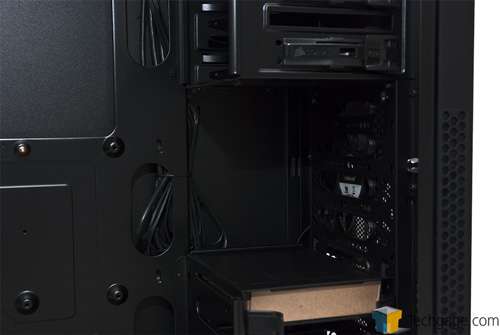 One of the selling-points of the 300R is that it can fit extra-long PSUs, such as Corsair’s own AX1200. I’d personally find it odd for someone to purchase a power supply that costs three times the chassis, but who am I to judge? The same selling-point can be used for the GPU area, as unless you are using something freakish, it’ll fit (to be more exact, GPUs are supported up to 450mm in length). 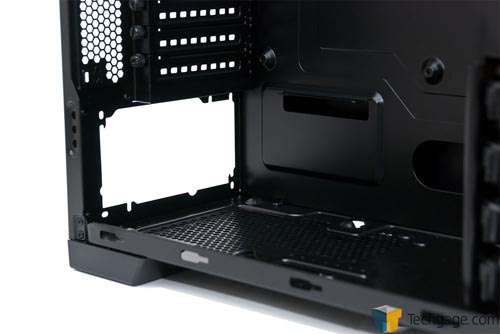 Behold, the lone 120mm-only location in the 300R. With this shot I’d also like to draw your attention to the center motherboard standoff, which happens to be preinstalled. This isn’t a typical standoff, as it doesn’t support actual screws. Instead, its job is to sit there, look pretty, and act as a guide to make sure your motherboard doesn’t shift around when you are juggling both the board and a screwdriver. 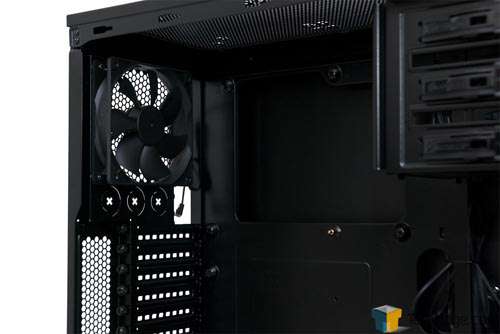 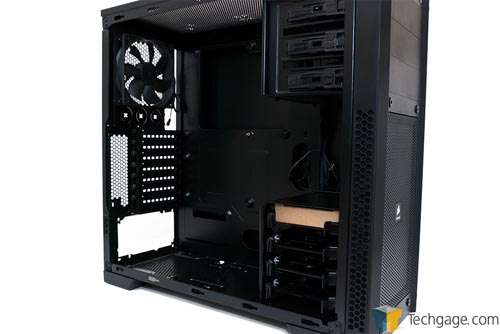 Here’s a little exploded view to show you what things look like with the front of the chassis taken off. Even after installing your ODDs, taking off this front every so often isn’t a bad idea for the sake of cleaning out built-up dust. And again, if you want even more airflow, you’re free to install a second 140mm in the obvious location here. 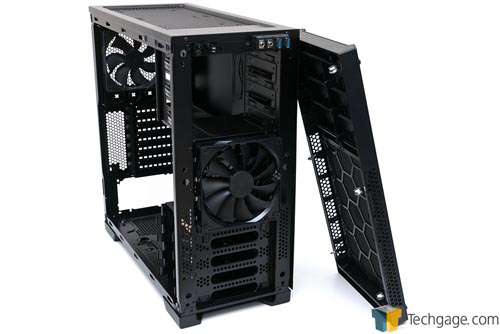 With that exhaustive look out of the way, let’s get right into some hardware installation and then my final thoughts.