Whenever I think about solid-state drives I am reminded of a famous quote I heard, “There’s a basic principle about consumer electronics: it gets more powerful all the time and it gets cheaper all the time.” – Trip Hawkins. Okay, maybe that quote was actually heard in a game of Civilization V, but still its validity certainly couldn’t be any truer.

When SandForce SF-1200 based solid-state drives launched in 2010 they started off at over $3 per gigabyte. The Crucial C300 launched closer to $4 per GB. Heck, when Intel launched its first 160GB SSD in 2008 it was priced at over $6 a gigabyte!

By comparison, for the start of 2011 prices are just below $2 per GB, although for consumers wishing to make every penny count, promotions can sharply drop this figure to around $1.50. We have already observed one major rebate promotion (expired) that pegged a SandForce drive at an eye-popping $1.10 per GB, and I expect that this is just the start of the trend. Consumers have very low NAND market prices to thank for such a rapid decrease in SSD costs, and with foundries starting up <30nm NAND production and new, even higher performance SSDs expected to launch this year, it is a safe bet that we will see high-performance drives reach $1 per GB prices this year.

With SSD prices compacted together, it is possible to buy SandForce drives for less than the cost of the lowest common denominator budget SSDs, so consumers should absolutely not settle for less than the current best performance SSDs when choosing what model to buy. This is probably why OCZ quietly canceled plans for its Vertex Plus, as there simply wasn’t room in the market for a new budget alternative. Flat out we can say either the SandForce SF-1200 or the Micron C300 drives would get our recommendation, although SandForce drives can be found for marginally less and perform just as admirably despite their SATA 3Gbps interface. 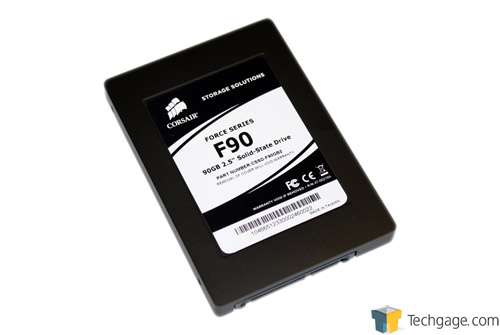 We are going to take a look at one such very affordable SSD. Its 90GB capacity allows it to undercut 120GB model prices while still offering a more than satisfactory amount of capacity for users that wish to install both programs alongside the OS onto the drive. The Corsair Force series solid-sate drives are, of course, SandForce-powered, making them an excellent choice for any potential laptop or desktop upgrade.

We would like to pause and applaud Corsair for not obfuscating which Force products use 25nm NAND flash, as users can determine if the drive they are looking at is using 25nm NAND by whether or not an “A” is present on the tail end of the model name, for example F80-A, or F115GB2-BRKT-A (the latter also denoting which drives include a 3.5″ bay adapter).

While leaving out much of the backstory and technical explanation, an unfortunate fact is that as NAND shrinks its lifespan also shrinks with it. While we are very willing to stake our own money (and data) on a 25nm flash Corsair SSD, we can understand consumers’ natural preference for 34nm NAND models where possible. As we will illustrate on our last page however, even with the lower write/erase cycles, the lifespan of a 25nm NAND drive should last well over five years in most situations. And according to the specification, NAND memory itself is only guaranteed to hold a charge for ten years regardless.

As old stock can still be found online it is important to note that the original “P” Performance series have been replaced by the P3 brand, and both the Reactor and Extreme models have been discontinued for the obvious reasons. Given the price disparity between all these models we can easily recommend focusing on the Force series, which often are the lowest cost and highest performing option out of all these contenders.

Only the Nova series slots in at $10 less, but that $10 will buy you a much higher performing SSD making it a straight-forward choice. Although the 115GB Force model offers a slightly better price per GB ratio, the 90GB model we are reviewing is close at $189 as of this writing.