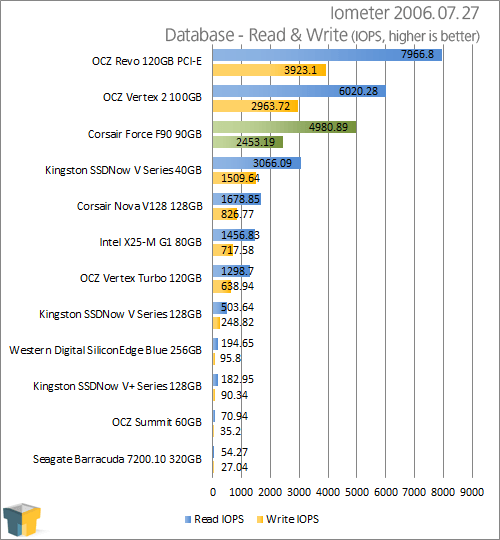 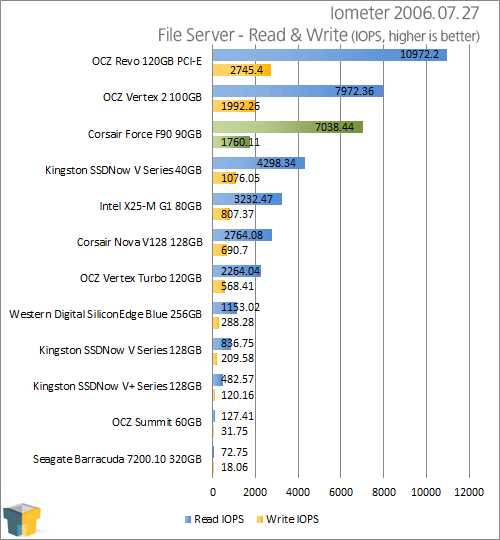 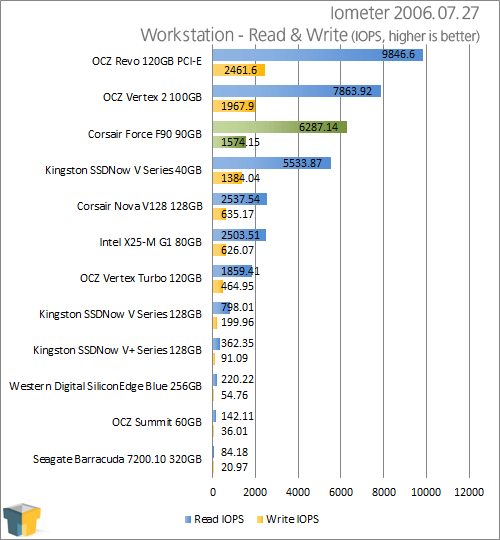 Iometer is one application that can replicate the most brutal conditions for solid-state drives, although for a traditional hard disk such scenarios would be simply dreadful. These scenarios in particular are why vast arrays of 15,000RPM SCSI drives are utilized in high and especially highly random I/O applications.

When having to seek to random data a solid-state drive has an inherent advantage. It can look up a read request in as little as 0.1 of a millisecond, as opposed to 7ms for a 10,000RPM drive or 12-14ms for most consumer level 7,200RPM hard drives. Compared to any kind of mechanical hard disk, these near instantaneous access times are what give SSDs most of their mojo, and why a difference in system responsiveness between one a system with an SSD and one without can by physically noticed just through normal use.

Iometer testing showcases which of these SSD controllers are the most capable at servicing numerous small reads and/or write requests concurrently. Think of the SSD controller as the drive’s own CPU, as that is basically what it does; even hard disk drives have a controller. What this test focuses on is testing how much it takes to max out and saturate the controller in read/write requests.

As these Iometer tests are designed to max out the SSD we are left with some extremely large variances in results between our contenders, but for those looking for a quick idea to put them in a context: anything around the old Vertex Turbo drive or higher is more than sufficient. Anything higher, while impressive, only translates into higher read/write bandwidth. Which is the same thing as saying while the Bugatti Veyron can exceed 250mph, anything above 80mph doesn’t mean a whole lot unless you have a dedicated racing strip to use it on.

The same is true with SSDs, we are reaching a point where higher IOPS is great to have, but unless users have a dedicated workload that actually requires it, anything extra is superfluous for typical enthusiast desktop use. All that being said, it is still nice to have and as expected, the SandForce SF-1200 controller in the Corsair Force SSD has power aplenty under its hood. 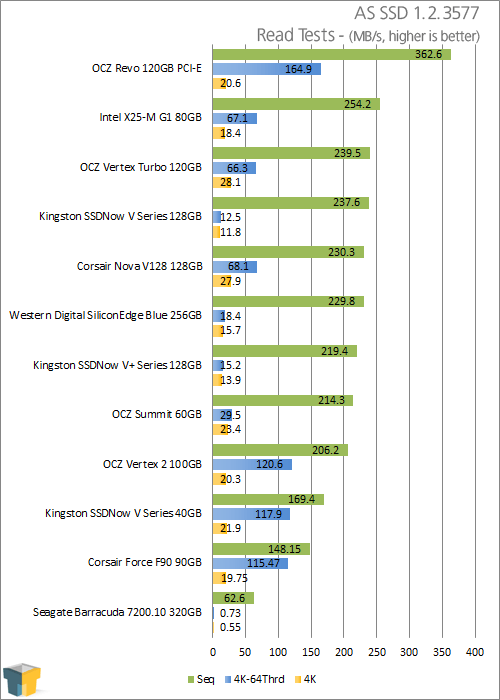 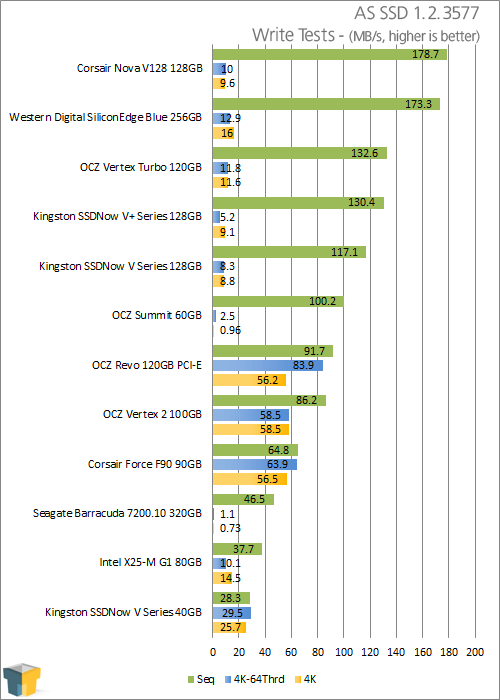 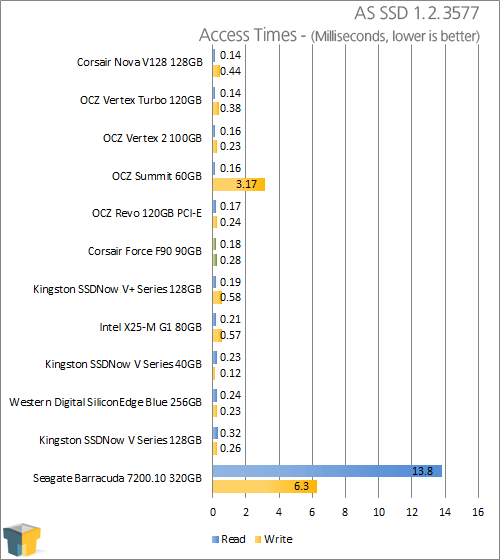 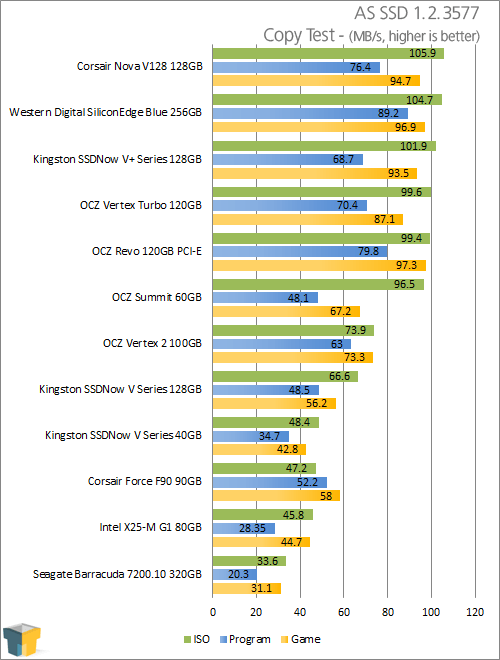 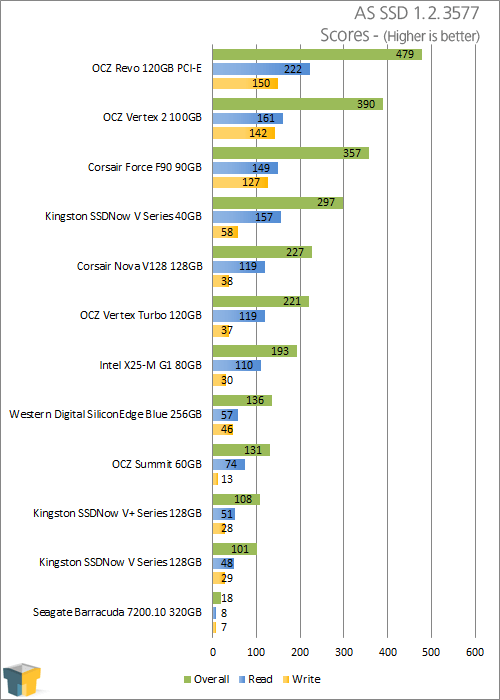 AS SSD is an application that was written specifically for solid-state drives as an easy tool for any computer user to download and run for some quick, comparable results. We utilize it for its appropriate focus on small file operations and because it bypasses Windows 7’s automatic caching system in the process.

It is interesting to note that SandForce drives don’t fare particularly well in this program, and we finally have an answer as to why. It appears to be because of the type of data being written isn’t compressible. SandForce drives are unique in how they function; they attain their stellar performance through data compression. However if the data being written is already highly compressed (such as an MP3 or JPEG ) then it will offer lower performance. This is why the OCZ Revo, which is unarguably fast enough to exceed the SATA 3Gbps interface and had to be put on a PCIe card, had such trouble with the write portions of the tests. As such we can say these would be the worst-case scenario in terms of possible performance.

However, as most users don’t plan to utilize their SSD as an expensive file storage drive we don’t think these results should be any sort of deterrent, especially given both the read and write performance is still in another universe compared to mechanical drives. The worst-case scenario would be few and far between if utilized as an OS and Program Files drive.