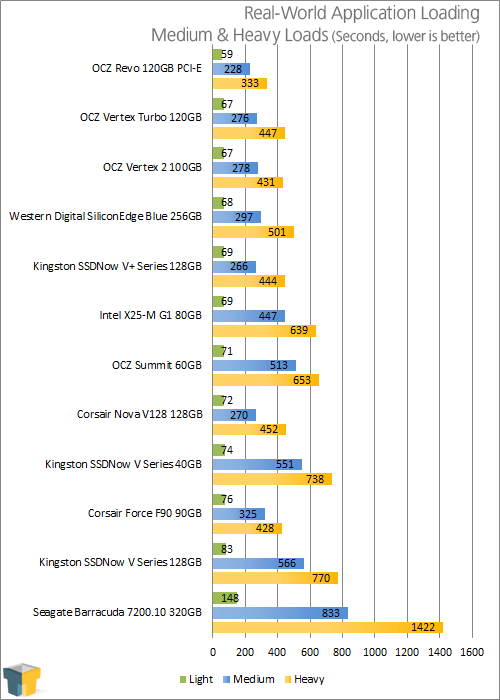 In the time required for a typical computer using a hard disk drive to boot to desktop, it is possible for an SSD to have reached desktop and fully load a multitude of programs and files. In fact, the Corsair Force 90GB can load all the above programs and files in 76 seconds, which is still HALF the time required for a mechanical hard drive just to load Windows. That begs the question: maybe it isn’t the OS that is so slow, but the storage device most commonly used?

Keep in mind boot times are also dependant on the motherboard and system hardware, a newly released Sandy Bridge motherboard with UEFI that replaces the BIOS will drop boot times significantly below those seen in our older testbed. (The newer SB processor will certainly contribute, too).

Although not at the top, the 90GB Force drive puts in respectable performance in our medium batch test. One thing not shown in our graph is the remarkable consistency SandForce drives in particular seem able to deliver. Despite seven gigabytes of data being copied across partitions, a few more being generated from archive extractions, and hundreds to possibly thousands of file reads and writes occurring nearly at once, during all five runs results always fell within the same 14 second range. Now that is consistency! Those SSDs with good controllers in particular have this effect for generating very consistent results which is why they see widespread adoption in all sorts of benchmarking platforms, but from my personal experience SandForce drives are currently one of the best at it.

As mentioned already our heavy batch test uses the same scenario as the medium test, but adds a concurrent anti-virus scan of a static, 5.1GB test folder that consists of nothing but Program Files. If I was using a mechanical hard drive this is usually the part of the test where I could start it up, then watch last night’s evening news and come back in time to catch it finishing. (Okay, admittedly only if I skipped through the drug and oil commercials). Whereas a 320GB mechanical drive required an average of 23 and a half minutes, the 90GB Corsair Force on average was able to achieve the same result in a much more reliable seven minutes and eight seconds.

At less than a third of the time to complete the task it isn’t any wonder SSDs have become so attractive to end users and businesses alike. For consumers that don’t have the liberty of having their boss foot the bill they will need to decide if they have sufficiently demanding applications with disk IO (besides games, mind you) that need a fast solid-state drive, or if they simply want one bad enough. However it is done, SSDs are well worth the upgrade.

We already mentioned the SSD consistency, for the heavy test the slowest and quickest results deviated only by 19 seconds between all five runs. Now go run a full anti-virus scan on a computer that uses a hard drive and try to get anything done at the same time, let alone reliably, it just isn’t going to happen. With the Corsair Force the system remained responsive and had plenty of performance left to handle opening programs or files, including stutter-free playback of music even with everything else running in the background. With an SSD program file installations, anti-virus scans, file searches, and program updates don’t have to interrupt whatever the user is doing.