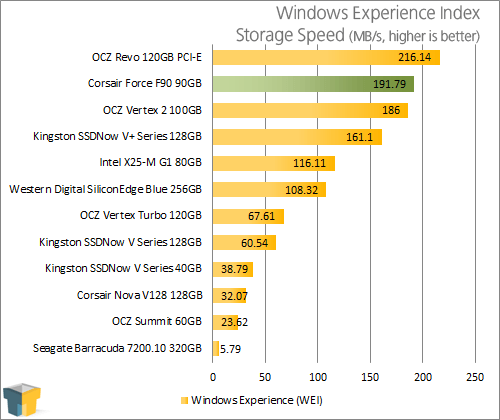 Windows 7 appears to rather enjoy the newer firmware on the Corsair Force drive, as it is able to surpass the Vertex 2 100GB SSD in this test by an opportune 5MB/s in WEI’s small file write test. 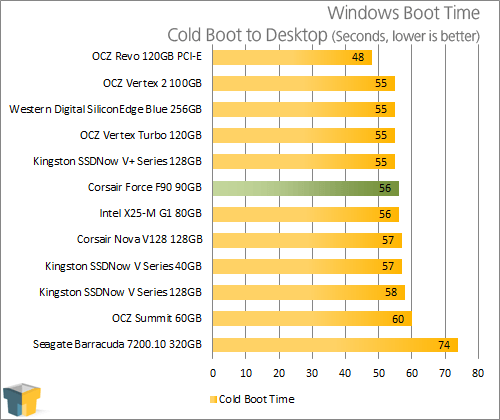 Ignoring the Revo’s showboating, it is fairly clear the test system is limited to 55 seconds under most conditions. With ASUS replacing the old 80’s era BIOS with a new UEFI BIOS that finally brings the BIOS into the modern age, a P67, Z67, or mostly any new UEFI motherboard should allow for drastically lower boot times.

With the right settings we’ve heard 20 seconds is very possible, for example… my own personal gaming system is around 30 by comparison. Again this just illustrates that when considering any sort of computer upgrade, make sure the computer itself can actually fully utilize it before doing so. Back on topic however, it is clear the 90GB drive has no issue keeping up with the best boot times here, making it a good drive option for laptops in particular. 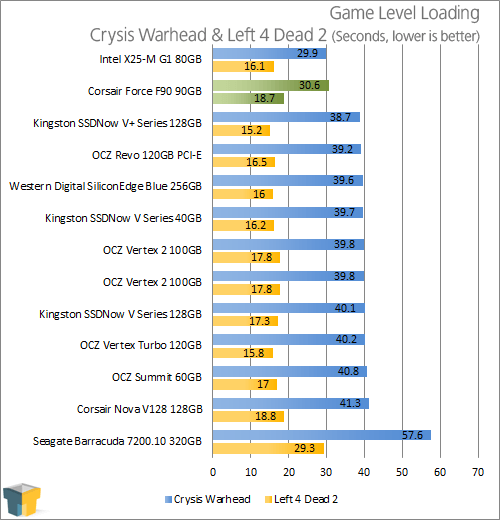 Finally, we reach the most important of our benchmarks! Okay, maybe those were really the batch test scenarios, but admittedly games are more interesting! Choosing almost any SSD results in a near halving of load times over a mechanical drive, but don’t forget that is just a single level. Keep in mind just how many loading screens are seen during the typical single-player game; gamers can rather quickly come to appreciate having even a few seconds saved off load times rather quickly, and all the more so for those immersive titles.

Most SSDs are quick enough that there isn’t any distinction between them in our tests, and as hinted at before, this is because games, like most programs, are written to be especially frugal with hard drive accesses. Those that aren’t quickly earn a bad rep as poorly coded or simply unoptimized software due to the poor responsiveness they exhibit. Even so, we find it curious that the Force 90GB tied our best (and only) SSD to break away from the pack in the Crysis test. We can only attribute that to a quirk with Crysis itself, or perhaps some minor optimization in the drive’s newer firmware as compared to the Vertex 2.