It has been a little while since Corsair last released a CPU cooler, so they’re hoping to successfully win everyone over with their all-in-one H50. Based on Asetek solutions, Corsair spent many months tweaking the H50 before they considered it complete, so let’s find out if their hard work paid off in the end.

With Quad-Core processors on the verge of becoming the standard choice for consumers, the subject of heat-removal has become more critical than ever. Some of the latest CPU’s are capable of pushing the heat output to over 130W – even without overclocking – making this an even more important consideration. All of this results in over-sized coolers, which are sometimes noisy and quite often won’t fit inside that new chassis you have your eyes set upon.

Of all the current available solutions, water-cooling has the best potential to overcome these obstacles, since it has the uncanny ability to absorb high heat loads without the heat soak associated with air cooling. Unfortunately, not everyone has the time or desire to build their own custom setup (and they may not want to take the risk). Then there’s the cost…

But thanks to enthusiast companies like Asetek and CoolIT, we finally have some affordable all-inclusive all-in-one water-cooling kits. Being able to equal, and sometimes beat, the performance of the top guns of the air-cooled world has boosted sales of this type of cooler by a fair amount. The days of inexpensive kits being all show and no go are long gone, giving way to many more choices when shopping for coolers.

Corsair has been long known for producing quality memory kits, power supplies and storage devices, but they’ve never quite set their name in stone where cooling is concerned. They hope to change this with their “Hydro Series” H50. With a simple design incorporating the pump into the water block and an easily-mounted radiator/fan combination, it looks like the company has done its research. How well did that research pay off? Let’s take a closer look and see.

Out of the package and onto the table, we get our first up-close and personal look of the H50. Regardless of which platform you run, Corsair has gone ahead to include all the necessary mounts for all current socket-types. The company has also included a fan with a 4-wire PWM connector to allow the motherboard full control over its speed, if you wish to take that route.

The radiator itself is somewhat on the small size, being able to only hold a single 120mm fan, but the company has clearly gone the route of optimizing for an internal setup. 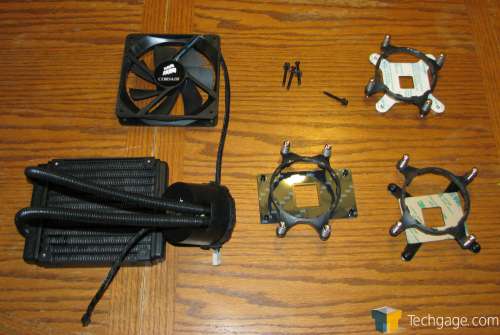 The included fan is somewhat standard-issue as far as 120mm fans are concerned. The seven-blade design is a good compromise between performance and noise. Running at its top-rated speed of 1700RPM gave us a decibel rating of just under 45dB, with the meter held 1′ away. Take note that Corsair recommends you install the fan in the intake position to draw cool air over the radiator, rather than sucking hot air out. 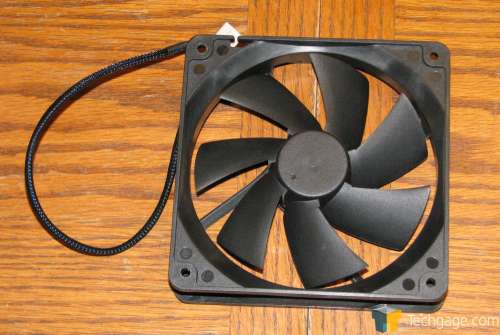 The CPU mating area comes pre-applied with thermal compound, so after testing, I removed all of it in order to give a look at the finish of the surface. It was smooth to the touch, but not polished. But all in all, the finish was more than acceptable. 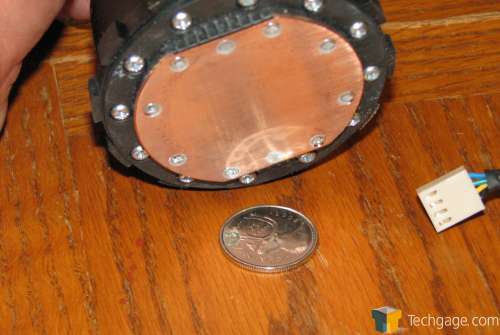 The build quality of the H50 is very good, and even the plastic bits feel solid to the touch. Corsair has taken their usual care to deliver us a quality product that definitely looks the part. Now, with that look out of the way, let’s get it installed into our test machine and see if it can perform as well as it looks.