Recently, most of the cooling products I have taken a look at have all preformed quite well, and that just leaves me with only one way to describe the H70: phenomenal! Corsair has done its homework and delivered a great product with a good value of around $100 US. While this is somewhat higher than the direct competition, it is hard to fathom that those looking for that last degree of temperature drop would be disappointed.

Cooling performance speaks for itself so loudly, it could be considered shouting. With the heat output of the Intel Core i5-750 pushing it to the limits, the H70 had no problem beating out the competition in both air and water categories. My configuration is not setup to aid the coolers in their job, so they are forced to all the work themselves. In this environment, the H70 had no problems getting the job done.

As for the size, I am very pleased with the power to space ratio. So many air coolers are unreasonably large, so they interfere with most of the other components and peripherals that surround the CPU socket. There is nothing worse than trying to install something that just does not physically fit the space it must occupy. To me, coolers like the H70 use the most logical space and don’t intrude elsewhere. 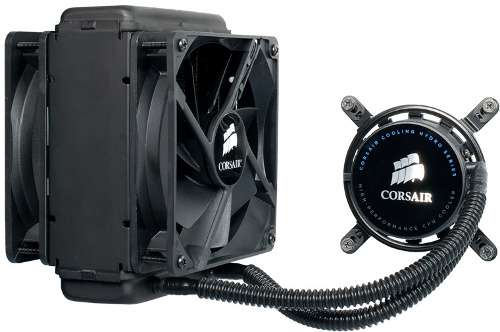 A long standing complaint of the H50 and similar coolers is that we usually only get a single fan to do the job. Corsair has listened to those cries and has supplied dual fans for even further flexibility. If you have the space then running two fans is always better than one, but it is also nice to have the option to easily remove one should it be necessary due to space constraints. Let’s face it… the last thing anyone wants to do is be forced to purchase an additional fan and hope that it will work well with the other.

The main weakness of the H70 is noise. Most all-in-one water solutions tend to run very quietly, although temperatures usually suffer because of this. I found the fans here to be noisy at full load, albeit remain tolerable, but I did find that the liquid inside the radiator “gurgled” more than I would have liked. I would not call this a show-stopping issue, but if you want absolute silence you need to keep it in mind. While I would expect prolonged use to quiet this down as air is bled out, there is no way to guarantee this without much longer-term testing.

Corsair has done a great job redesigning and building a solid new cooling device for the enthusiast. The results do not lie and they show the H70 works very well. I have no issue awarding it the Editor’s Choice award for absolute cooling power and outstanding performance across the board. It may be a bit more expensive, but the adage of “you get what you pay for” applies here and without a doubt, you won’t be disappointed.