When we took Corsair’s first gaming headset for a spin last fall, the HS1, we were left impressed by the fact that the company went for balanced audio instead of boomy bass, resulting in a refreshing listening experience. As they were USB-based, though, some who owned dedicated audio cards shunned them. The remedy? The HS1A.

With the introduction of the HS1 headset back in October of last year, we were delighted with Corsair’s first entry into the PC audio world, with 2 sets of speakers to follow. The only complaint, if any, that could be made about the headset was the USB connection required. To those without a dedicated audio card, this wouldn’t be a concern; however, those who have splashed out on a high-end card, it meant a sacrifice. The HS1A under review today is near identical to the original, with the omission of USB in favor of a more traditional 3.5mm jack.

The requirement of a USB connection of the original headset may not strike many as a problem, as it’s universal and saves cable clutter; but it must use it’s own drivers, bypassing any existing audio solution and can not be used with consoles. The advantage though was Corsair had fine control over tuning, allowing for the HRTF-based functions such as 7.1 and the ability to shift the soundscape forward to reduce the ‘in-head’ effect that causes fatigue.

While the tuning and drivers were nice, there was always this wanting feeling to plug them into a real sound card to hear what they can really do. Even before the release of the USB-based HS1, Corsair was already working on the jack-based version too. The headset design was extremely comfortable due to the use of large memory foam pads with felt covering – they really can be worn for a whole day without discomfort; so it would have been a shame to release only the USB option.

Fortunately, Corsair did release a jack-based solution as the HS1A, and here we are… 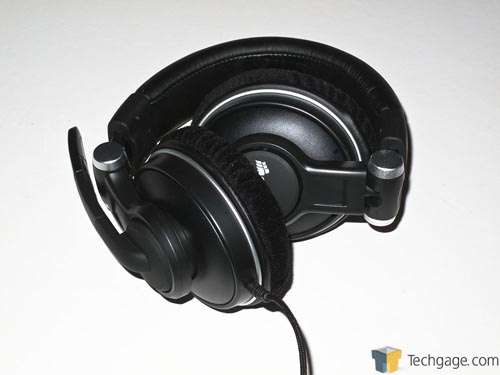 Now, you’ll be forgiven if you think these look identical to the the HS1, because, quite simply, they are – except for a dash of black instead of silver on the cups. The only other change comes with the volume and mic control unit. 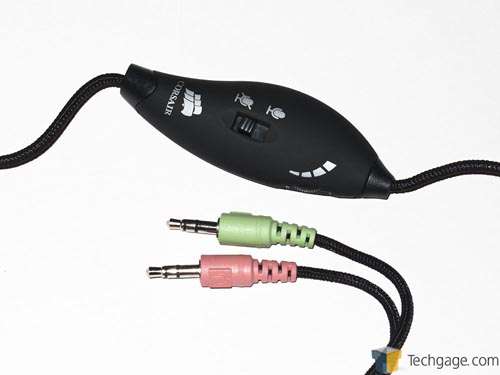 The core design remains the same. A noise-canceling microphone, 50mm drivers, memory foam ear pads with closed-back, circumaural/over-ear collapsible cups. An addition comes with a pair of replacement pads which use the more common synthetic leather. In general, the already applied felt pads are a much better solution as they provide some sweat absorption, rather than the pleathers ability to induce sweat (and peel over time). 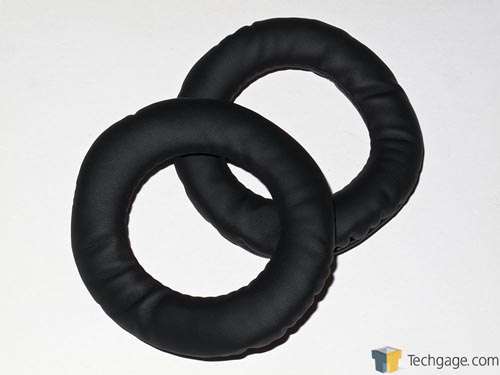 It’s the large memory foam pads and 50mm drivers that are the real lure to this headset. The design is the most comfortable I’ve come across, and I do not exaggerate when I say I have used these near non-stop for 12 hours straight. The headset does have a fair bit of weight behind it, but due to the distribution over the pads and a well-padded bar over the top, you hardly notice. The closed-back provides some passive noise canceling, removing a lot of background noise; the side-effect comes in the form of limiting your ears ability to breath, consequently increasing sweat, duly taken care of by the felt pads.

The HS1 had some minor issues with regard to audio quality, namely as a result of the USB connection using the equivalent of its own integrated audio chip in the form of C-Media’s Xear 3D engine. The mid-range came across as a little harsh and cold while the extra processing methods such as the Dolby headphone and 7.1 modes changed volume levels and dropped off the treble (but still proved a good change to the soundscape).

Corsair also decided to use a balanced audio curve, meaning it avoided the double hump method of bumping up the bass and treble for a more impressive sound. The balanced method is more accurate as you end up listening to what was originally intended. Those who have been using the more boomy type super-bass headsets in the past would quickly notice a distinct lack of bass.

The HS1A keeps the balanced curve but this time has a direct link to a dedicated audio card. It’s worth mentioning now that these headphones will not sound that great through an integrated solution, as everything will sound compressed and flat; these really are meant for a dedicated card. Even my now aging Audigy 2 ZS is significantly better than any integrated audio tested so far.

So what do you get when this headset plugs straight into a dedicated audio card? Well, the cold and harsh tuning from the USB is gone, everything is a lot more balanced, but unexpectedly, the bass is even more subdued. I have become accustomed to the reduced bass levels over the last few years, but the bass with these HS1A’s is still very low, slightly lower than the USB HS1. This is not to say that it can not produce bass, it most certainly can; it is the default setup that will leave people wanting.

With a little bit of EQ tuning, you can bring back the bass to something you are a little more comfortable with. The treble and mid are still very clear, and the treble is not piercing at all. There is still a certain cold element to the sound due to lowered bass, so again, turning it up a bit will bring back some warmth.

This headset is definitely more tuned for music than the traditional boomy response found in a lot of gaming headsets. The advantage with the HS1A is that it’s easier to just boost the bass a little than to try and and fiddle with the EQ on a pre-tuned pair should you find them a little too aggressive.

In terms of volume, the integrated controller is very smooth and linear, there are no sudden boosts half way through as you increase the volume. If you frequently swap between speakers and headphones without a balanced headphone jack on the speakers, it would be easier to set the system volume high and set the volume control low on the headset. The microphone is adequate, if a little quiet, and the noise canceling doesn’t distort things too much either. 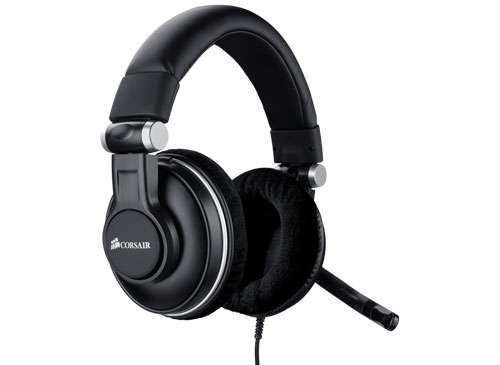 For comfort and balanced sound, the HS1A is a must-have headset. With a little EQ tuning to bring back the bass, these would be perfect for gaming and movies too. They can be worn for hours at a time with minimal discomfort. If you have a dedicated audio card, but don’t want to bust the bank on premium headphones, these are an excellent choice. If you have an integrated audio card such as a Realtek HD solution, then go with the USB based HS1. In either case, Corsair’s headsets are a fine choice and easily worth our Editor’s Choice.