Corsair knows their stuff when it comes to performance memory, but how about power supplies? Despite the fact that they are new to the PSU market, they prove that they are not newbies. After taking a look at their HX620W, we walk away impressed.

Power supplies are an imperative part of your system that should not be taken lightly. Throwing in a budget PSU could result in poor power efficiency or even a wrecked system. In the past, I have been foolish enough to trust “less than reliable” power supplies and have had two die on me while the system was in use. Luckily enough I didn’t damage the rest of my system, but that’s not to say it could not have happened quite easily.

Because of this trust that people put on their power supplies, it’s no wonder that everyone wants a piece of this pie. Not excluding memory manufacturers! OCZ was one of the first with their ModStream series, and it quickly became known to companies that great looking and efficient power supplies are what enthusiasts want in their rigs. In the past year we have seen both Corsair and Mushkin also enter the power supply scheme of things, which now opens up even more selection for you to peruse.

What does Corsair have to say about their power supplies? These are not cheaply developed, they are designed to well handle whatever you want to throw at them. They released two models, a 520W and the 620W which we are taking a look at today. Though the wattages are not a huge jump from one another, the 620W costs an average of $50.00 more. What both models offer are triple +12v rails capable of 18a. One noticeable difference between the two is that the 520W has a 24a +5v while the 620w has an available 30a on the same rail.

I am not the type of person to look at a box and think, “Wow that’s great.”, but this is one of those times when I will. This is a clean, simple and informative box, just as they should be. While the 620W has a black/red color combination, the 520W has a yellow/red scheme. 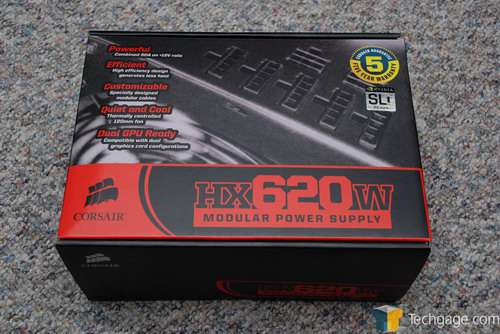 Showing shots of an open box is usually boring, I want to show that Corsair goes the extra mile to make sure you get the product in good condition. I’ve received many power supplies that were simply wrapped in a bag, but theirs is encased in a thick styrofoam box. 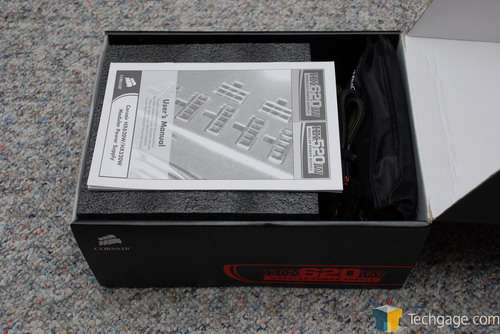 This is a modular power supply, so all of the available connectors are kept separate in a Corsair branded bag. The connections do not have rounded cables, but rather are completely flat, similar to the cables we’ve seen from Ultras FlexForce series. 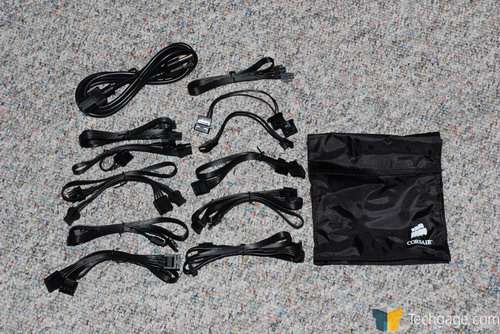 As you can see, the connectors are pure black. This is a great thing since it helps keep the inside of your case looking pimp, especially if you enjoy modding. The plastic connectors are the same color so the cables should add to the look of your rig. 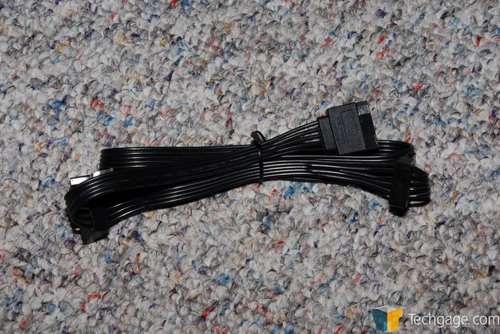 Here is a list of the connectors that are included:

As you can see, there are plenty of connectors for most anyone. There are a few things to note, but they are good things. Most newer motherboards require a 4-Pin power connector (4-Pin fan) to be plugged into the motherboard for extra stability. While Corsair didn’t add a connector for this purpose to run directly from the supply, they instead use an adapter that will convert one of the 4-Pin Molex connectors in the case into a 4-Pin fan connector. This proved to be a great thing, because it halted the need for having to run yet another cable from the PSU downward into the case.