For long-time enthusiasts, Corsair’s name still invokes pictures of memory modules or even perhaps a variety of indestructible flash drives. It wasn’t until the company’s highly successful foray into the power supply market that it began to be regarded as more than just a memory company. By offering from the start power supplies targeting that sweet spot of quality at an affordable price, the company quickly won over many consumers and seemingly changed its brand image overnight.

Since then, Corsair has even launched a line of well-received quality enthusiast computer cases. As the SSD market began to expand and develop, the company saw the burgeoning opportunity and launched a variety of SSDs using controller technologies from several of the major industry players.

As far as users are concerned there can never be enough competition in the SSD market, but not all solid-state drives that have been introduced are created anywhere near equal, either. The Corsair Nova series has nothing to worry about however, as it utilizes Indilinx’s famous Barefoot controller which has already proven itself as one of the more venerable controllers on the market. If anything, the Nova series is remarkably similar to Corsair’s previous flagship Extreme series of SSDs, with the only notable difference being a different choice of NAND venders (Micron NAND).

This means the Nova series effectively supersedes the Extreme models that can still be found at various retailers. Corsair’s Force series is the current flagship model and as the name implies it uses a SandForce controller along with a price to match. Instead the Nova series will ensure consumers have the option of last-years flagship model (and its performance) at a lower to mid-range price today, something we find quite agreeable given the solid, all-around excellent performance from the Indilinx Barefoot controller. 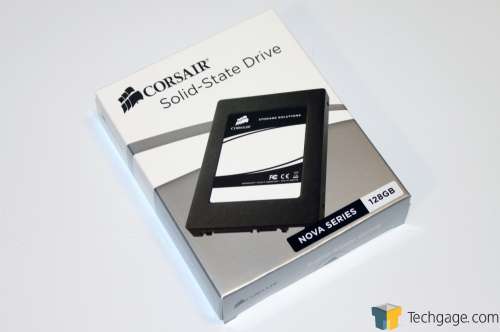 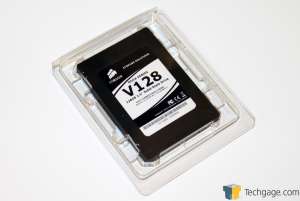 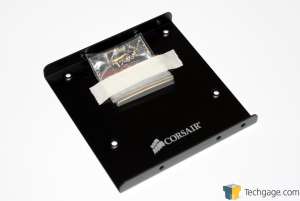 To make it easier to discern the key differences between Corsar’s SSD models we created a quick chart below using current street pricing from various online vendors. Curiously the Nova series receives higher throughput ratings than the Extreme series it replaces, likely due to firmware optimizations and the use of Micron instead of Samsung NAND. If you noticed something unusual about the pricing, we will address this in the conclusion.

Corsair utilizes a plastic tray to secure the SSD from possible shipping damage. Hidden inside the box was a familiar looking 2.5″ to 3.5″ solid-metal mounting tray that will securely mount the SSD into the majority of desktop 3.5″ drive bays. This drive adapter is the simplest design we have seen and makes it very quick to mount or change SSDs as needed.

Some notable features worth mentioning is the use of a 64MB DRAM cache, TRIM support if the operating system supports it, SMART, and NCQ capabilities. As with all Corsair SSDs the Nova series carries a full three year warranty. This warranty period is standard for the majority of both SSDs and HDDs alike. The Nova series drive uses a SATA 2 connection, but due to SATA 3’s backwards compatibility any SATA 2 device may still be plugged into a SATA 3 port just as with USB 3.0 and USB 2.0 ports.