With this we reach the first of our real-world tests where there are no unusual testing or scoring algorithms to leave us scratching our heads! First we start with a simple file transfer from one part of the same drive to another. Please note that straight file transfers to a different destination would post even higher results.

For this test we took a 7.16GB Dual-layer DVD image and timed how long was required to transfer it to a different 10GB partition created on the same drive. Keep in mind with a hard disk, this requires the actuator arm to seek back and forth between the source and destination sectors of the disk platter, while any SSD can instantly read and write to multiple flash chips at once. Still, this is not a test of the raw write speeds of a SSD as the SSD controller cannot read & write to the same parts of the NAND flash simultaneously. 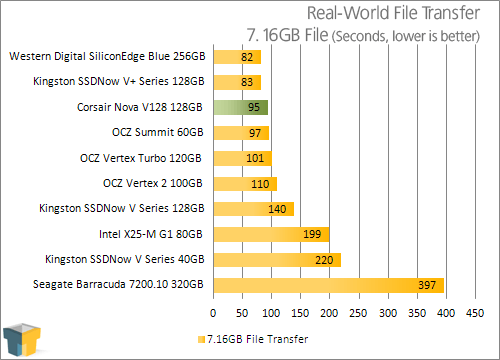 Finally we have verification that the synthetic programs have been claiming. The Nova transfers the file an average of six seconds quicker than the Turbo, illustrating the Nova does have the edge in file writes. This is an impressive feat given that the Turbo was already utilizing highly optimized firmware and a higher clocked disk controller. 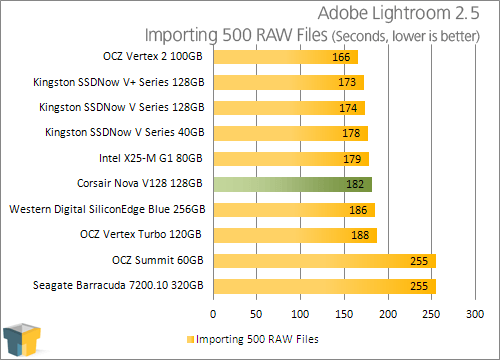 Somewhat interesting is that the results are split into two main groups with the Summit only able to tie the hard drive, while the other SSDs clump together around the 3 minute mark. It appears the Lightroom test is not demanding enough, and another system component (likely the CPU) has become the bottleneck here rather than the storage. Remember, Lightroom only utilizes two cores when loading and creating its image library, so it is not fully utilizing our slower quad-core CPU.

This should go to show that not all workloads are bottlenecked by storage, and that to get the most out of a fast SSD it will require an equally matched processor and system as to avoid any system (or in this case software) bottlenecks. Here the Nova again manages to somehow squeak a few more seconds off of the Vertex Turbo’s results.