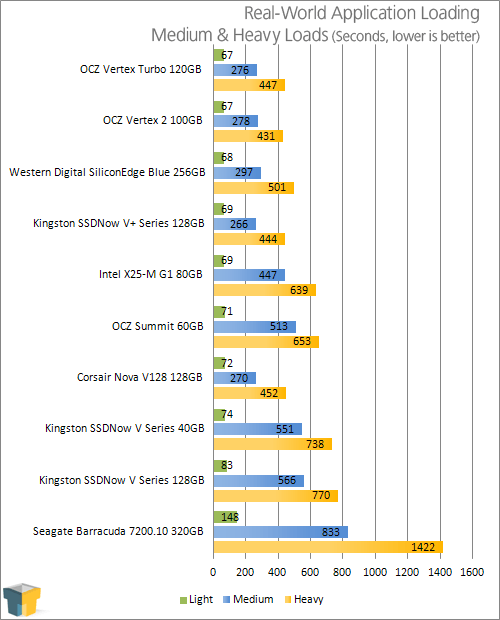 In the time required for a regular hard disk drive computer to boot, it is possible for an SSD to boot and have fully loaded a multitude of programs and files that you regularly use, as the nearly two and a half minutes for the HDD clearly illustrates. Keep in mind we are talking about booting both the OS and several frequently used programs, the base boot time for the best SSDs in this platform is a rather sedate 55 seconds. While loading these programs only requires an extra twelve seconds, for a mechanical drive they in fact double the time required to boot.

What should make the light batch results all the more impressive is to realize that a motherboard featuring one of the latest chipsets, with the proper tuning should be capable of dropping the best 67 second boot times down to as little as 35-50 seconds depending on the overall system configuration.
For the medium scenario the results are unfortunately beginning to clump together around the seven minute mark. This shows that once again the platform itself is beginning to bottleneck the faster SSDs in our tests, these drives are just fast.

The Corsair Nova performs admirably (did you honestly expect anything less?) here. Although it required a few extra seconds for the light test it required an average of five seconds less for the Medium batch scenario, and finally was five seconds slower in the heavy scenario. While the overclocked Barefoot controller may have had something to do with this back and forth of results we believe them to be just the natural variation between test runs and would consider the medium and heavy runs to be a tie.

In a roughly over four-and-a-half minutes, the Nova and Vertex drives complete the entire workload while keeping the system responsive and stutter-free. Requiring close to double the time (7:27), the Intel G1 drive is clearly showing the write bottleneck of 80MB/s and its lack of TRIM support, yet the competition fairs even worse. The discontinued 40GB V series drive only has half of the normal 10 flash channels and this, as well as the small drive capacity, limit it to a time more than double that (9:11) of the V+ series 128GB SSD. For those like me that are too lazy to do the math, the outclassed mechanical hard disk drive completes the identical scenario in not quite 14 minutes. That’s nearly 10 minutes of time saved just by upgrading to a good quality SSD right there.

As mentioned above the heavy test uses the exact same scenario as the medium test, but includes a concurrent anti-virus scan of a static test folder. If you needed further proof that choice of SSD does matter, take note that the Corsair Nova (and the Vertex Turbo which uses the same underlying controller) complete the heavy workload scenario in the same time tha the X25-M G1 requires just to complete the medium workload scenario! Oh, and for those wondering, while the Indilinx Barefoot controlelr completed the workload in roughly seven and a half minutes, the platter-based drive required an eye-watering 23 minutes and 42 seconds to do the same.

One thing not shown by our graph is that with the medium scenario the Vertex 2 performed all five runs with results that fell within seven seconds of each other. This level of consistency is another sign of a good controller, and the Indilinx Barefoot is second to only the SF-1200 in its consistency. Weaker controllers such as the “V” drive’s JMicron controller by comparison had some results differing by as much as several minutes, which is clear evidence the controller was becoming overwhelmed from the workload.

What to take away from this is even with the most brutal of scenarios, it is that SSDs that are best suited for heavy multi-tasking and quite capable of handling any sort of workload you wish to throw at them. Or simply every type of workload at once, it is up to you. It isn’t drive throughput that matters as much as small, random read/write throughput which is a completely different animal. And you are using an SSD, there is no longer any excuse for not having an active anti-virus program installed. ;-)