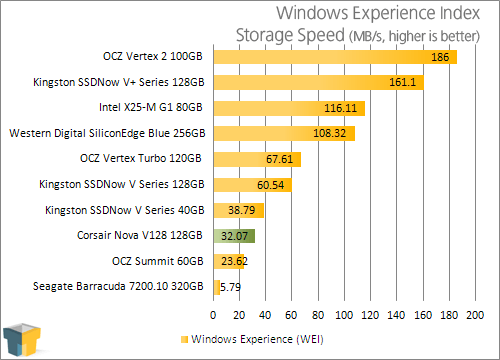 This result more than any other perplexed us as we don’t have any plausible explanations for the Nova’s aberrant result here. Even after rerunning this test several times the results were consistent. We maintain that the Corsair Nova should place very close to the Vertex in this test. 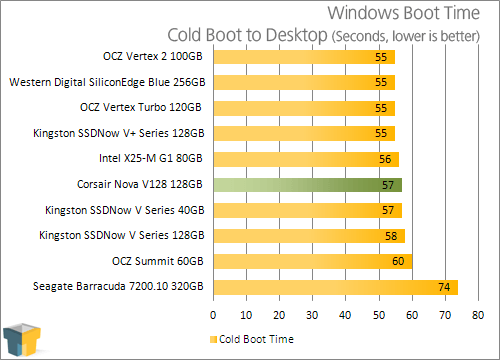 Mirroring the trend we saw in our Light batch boot test, a plain cold boot results in an extra two seconds of startup time here. This is far better than the almost twenty second difference as seen by the lone mechanical hard drive.

Results like this clearly show that as we reach the 55 second mark, the storage medium no longer becomes the source of the bottleneck. As we touched on in past articles, a modern chipset and motherboard combination will make it possible to drop boot times even further below these results. 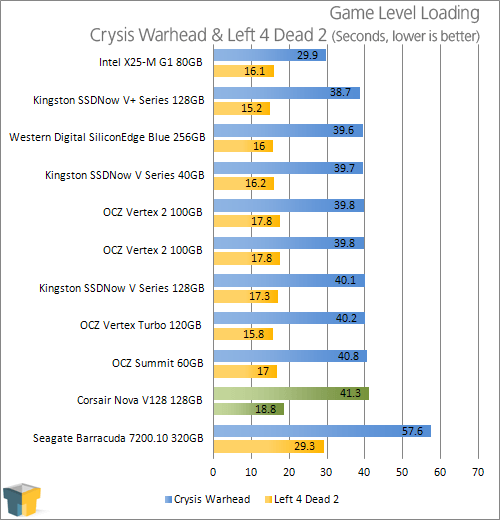 Finally, we reach the most important of our benchmarks! Okay, maybe those were actually the batch workload tests, but still games are admittedly more interesting! Choosing almost any SSD results in an immediate near-halving of load times over a mechanical drive, but the truth is most games are not demanding enough to see any improvement between a good quality SSD and the best SSD available. If this was the case most games would become intolerable to play for the majority of gamers that use mechanical drives, which is something no game developer is going to want.

That said, after having made the transition personally to an SSD in my gaming system I can attest those differences of ten seconds (or more) are definitely noticed and I could never go back to a mechanical drive for gaming.