In our look at Corsair’s SP2500 high-end speakers back in March, we were left impressed by the quality offered – especially for the company’s initial offering. With its mainstream SP2200, priced at $100, the company had quite a job at hand to make sure that users received a perfect balance of features and audio quality. Has it succeeded?

The sub unit is where all the action happens and makes up a considerable amount of both the budget and power of the total system. The sub is a rather large 6-inch, side-firing ported bass system which can go down as low as 40Hz without distortion. It can go lower, but the volume roll-off becomes quite substantial.

The front port does suffer from port-noise, but due to its size, it has a much smaller range; starting at around 44Hz and rolling off at around 66Hz. Port-noise is unavoidable, especially with a lower-end system, and much like the SP2500 it only produces the tell-tale rumble at very high volumes in very isolated frequency ranges; general use through music and/or games is unlikely to be a problem.

Even with an exposed speaker on the side, sound will still come through the front port, so you can twist or turn the sub as you wish; though I would still recommend keeping the port facing towards you. 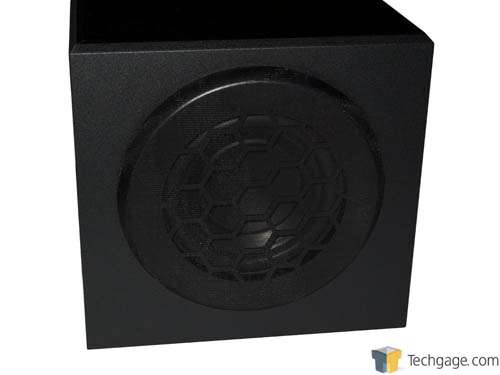 Around the back of the sub we find an additional input, RCA, as well as the DIN receptor and power input. Due to the large 6 inch speaker and by trying to keep the footprint small, the SP2200 makes use of an external power brick rather than internal. 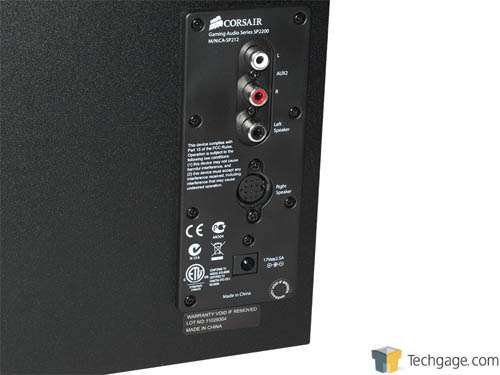 Installation was a breeze – as one would hope with a set of speakers. Everything is clearly labeled, the DIN connector only goes in one place, but the left channel RCA connector might throw you for a second as it’s bundled on the back of the sub next to the secondary RCA input. It’s so simple in fact, that the installation diagram is the front page on the manual.

The right speaker controls are smooth but not completely linear in transition. The sub control is fine for the most part but master volume control tends to be less noticeable at higher volumes, regardless of input volume. This just basically means that volume control goes up to about 3/4, past which it has little affect.

An interesting note has to be made about the headphone output as it introduces a novel feature (to me at least). First, the volume is very balanced; you won’t be in a scramble to change it when headphones are plugged in and likewise, you won’t be scrambling to change the volume after removing them due to a rather simple but very effective eased volume transition.

Normally, removing headphones from a speaker set, you are presented with crackling, and if you turned up the volume for the headphones, a nasty surprise awaits when unplugging mid-media stream. Preventing this, the SP2200 gradually increases the volume up to whatever is set by the master dial, so you won’t be hit by full volume all at once.