With the launch of its HS1 headset last fall, Corsair proved that the audio market wasn’t one it was planning on jumping into without first making sure that its products would impress. But what about those gamers that don’t like to use headphones? The answer is the SP2500, a speaker set with a unique design, and a lot of power.

Corsair has decided to break into the audio market and it’s doing so in a big way. Late last year we were introduced to its HS1 USB-based headset and came away thoroughly impressed. Well, today, we’ve been given the delight of its next adventure into the audio world, with a high-end set of 2.1 stereo speakers – the SP2500. These speakers are not your run of the mill, over-stylized stereo set, these mean business.

What makes them so special you ask? First off, a long list of audio jargon to wrap your head around. Each satellite is bi-amplified with a digital active crossover, featuring a 3 inch mid-range driver and an asymmetric silk-domed ferrorfluid-cooled tweeter. Marketing must of loved that phrase.

The mid is rated to 40 Watts and the tweeter at 16 Watts. The big thing mentioned is that this is sustained output; measured by the FTC method (rather than the usual ‘Peak’), and are capable of running at 100% volume for 2 whole days without distortion. Why anyone would want to run these speakers at such a level for so long is beyond me, but it’s nice to know they can.

The subwoofer is a beast of a speaker, even compared next to the monster that is the Logitech Z5500. The Sub uses a bi-amplified, 120 Watt, 4th order band-pass system using an 8 inch driver. The band-pass system will be explained later on in this review.

Controlling all this power comes down to a small wired DSP remote control system which includes a rarity theses days, a TFT based display. This little unit controls the various equalization modes, volume and other sound processing features. In total, the system is on the large size with the subwoofer taking center stage. And you know what they say about big equipment… big boxes. 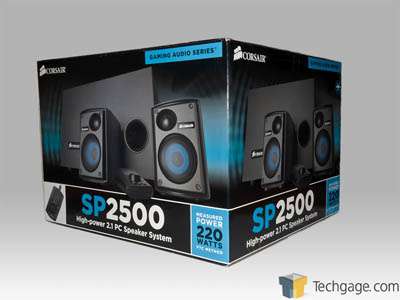 It’s rather strange to mention padding here at Techgage, but it is worth mentioning. The majority of the packaging is cardboard and very easy to take out and even put back in – while at the same time being completely solid. Kudos to the package design team.

The only problem would be a change in key features since the box design was finalized, namely that of total power. The box and manual state the total power as 220 Watts when it is actually 232 Watts -minor changes to the satellite values I believe. Taking everything out, let’s see the major components… 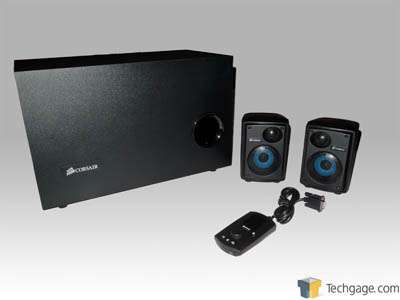 Quite the grand piece of kit measuring in at 18x11x10 inches, the subwoofer really is a beast. The size really can not be stressed enough, it is huge and will require decent floor or desk space, depending on setup.

For comparison, this is the unit next to a now somewhat aging Logitech Z5500 sub, which uses a front-facing 10 inch driver. 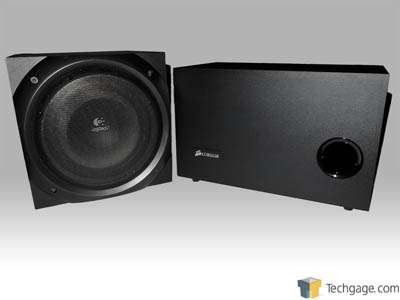 Aesthetically, the SP2500 sub is rather reserved, choosing a very simple and stateful design of function over form. The only indication of it being a speaker comes from the small 3.5" flared port. All the I/O options are tucked away ’round the back. Maybe age is beginning to creep up on me or it’s my pragmatic nature, but these understated designs have become more appealing over time.

The sub housing is a thick plastic rather than the standard chip or fiberboard found with larger boxes. It does make the unit much lighter without having too much of an effect on the acoustic qualities, due in part to the 4th order band-pass.

Round the back of the unit is the rather small selection of inputs and outputs. As far as inputs go, there’s a dual RCA phono connector and a 3.5mm jack. No coaxial or optical inputs here. 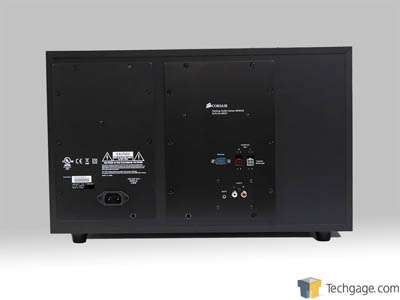 Corsair’s reasoning behind this is justified though; since these speakers are for PC use, the soundcard will handle things like DTS decoding and such, so the need for additional decoding on the speakers is unnecessary. Optical would have been nice – then consoles could make use of these speakers without worrying about Y splitters and extra cables, but consoles can still be used with appropriate adapters for RCA or Jack.

Those with an astute eye will also notice something strange. First, the lack of normal speaker wire clamps (a good thing), but also a lack of a standard connector type for the satellite connections. Yes, those are 4 pin ATX connectors commonly found on power supplies. There is a justifiable and very good reason for this which will be explained later in the review.

The satellites are quite small and a little bit on the heavy side (for its size). Again with the understated design, the only bit of color across the whole unit is the mid-range driver with a rich electric blue. The flash from the camera does kind of make it appear brighter than it is, so don’t worry too much. 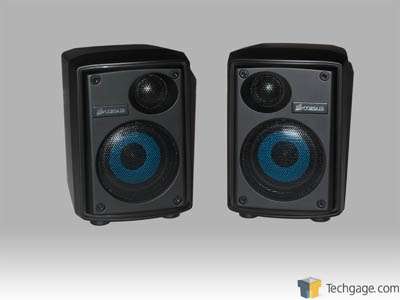 The 2 main features of these satellites comes down to the bi-amplified setup and the asymmetric layout of the tweeter – the same sort of setup found in studio monitors. Each mid-range driver and each tweeter are on its own amplifier; making use of a fully digital active crossover system.

The net result of this means that you don’t have a single speaker trying to cover a very broad frequency range, removing the need to balance out the audio curve to accommodate it; better sound quality ensues.

Two little stands are also included, increasing the elevation of either the front or the back by an inch. This is so that the speakers can be aimed correctly for a more accurate stereo soundscape.

Round the back of the satellites we find those ATX connectors again. 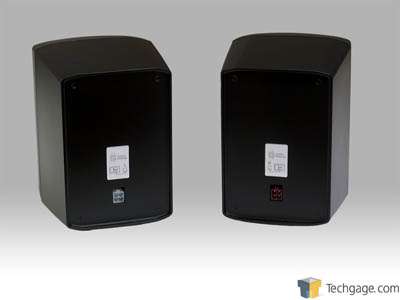 On the following pages we’ll go through the control unit and take a detailed look at some of the features and design choices.