With the launch of its HS1 headset last fall, Corsair proved that the audio market wasn’t one it was planning on jumping into without first making sure that its products would impress. But what about those gamers that don’t like to use headphones? The answer is the SP2500, a speaker set with a unique design, and a lot of power.

Most speaker systems in the PC market make use of what is called a Ported Bass-Reflex system. This is basically an exposed speaker with a hole in the side of the housing for air flow. Theses systems are all well and good but can result in a distorted or muddy response – meaning that it becomes very difficult to differentiate between bass notes, it comes out as just ‘bass’ with no definition, all ‘boom’ and no ‘thud’.

The 4th Order Band-Pass makes use of ‘acoustic suspension and isolates the driver which fires into a ported chamber before leaving through the port.

This setup is quite popular among audio enthusiasts as it has a better transient response, allowing for punchier bass, and also lowers the cutoff frequency, meaning the sub can specialize in what it does best; produce bass without having lower range mid-tones distorting things.

The following diagram supplied by Corsair does a fine job of showing the difference between 4th Order and Reflex designs. 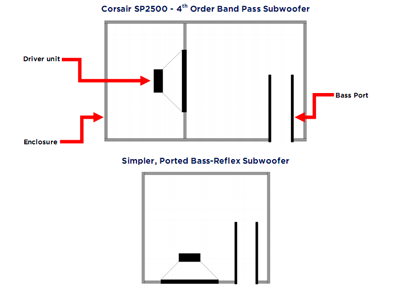 The one problem with any of these ported bass systems is that of port noise, and this is something noticed quite early on in the review. Originally, I mistook it as a defect and had a new set delivered, with the exact same problem. A little more research on my part could have avoided this.

When under heavy, low frequency conditions (30-55Hz range), the port on the front of the sub becomes a contention point. This results in it sounding like a muffler on a car exhaust. The only way round this is to use a bigger port, the problem with this is that it changes the acoustic properties of the sub, which means a larger box would be needed, a balancing act as it were.

Port noise will not become an issue except under very high volumes with continuous and very low frequency sounds. Emphasis on continuous. Out of all the music tested, only two tracks could consistently produce any kind of port noise (for those interested, both tracks came from games, Razorback from Unreal Tournament and the title theme tune to Bloodrayne, two personal test pieces I use since they have large and long bass sweeps). This is with the sub volume at 20/24 bars, master volume at 10/24 bars and system volume at 90%.

For a more clinical reproduction of the problem, simply use a tone generator with a sine wave frequency between 30-60Hz. The most apparent reaction came in at 36Hz.

It must be reiterated that under normal use, port noise will not be an issue. It’s only under high volumes with lots of bass going on that you may even notice, but by that point, you’ll be too deaf to care – these speakers are quite capable of some uncomfortably high volumes.

Another issue that did arise, unrelated to the sub, is that of high volume hiss. With an empty input channel selected and maximum volume set, there is a very faint hiss coming from the satellites, probably digital noise as a result of the DSP. The hiss is very faint, and under any kind of sane volume, inaudible.

The Satellites with the SP2500 would be considered high power and on top of that, bi-amplified. Normal jack or RCA connectors would not be able to handle the 40 + 16 watts of power required reliably. This is largely a safety concern than to con people out of money for specialised connectors.

If normal speaker wire clamps or RCA connectors were provided for people to use their own cables, then there’s nothing stopping them from picking up the cheapest and consequently, thinnest cables possible and pumping 56 Watts of power through them, melting or even burning the cable. While this is unlikely to happen, it is of concern.

Being bi-amplified as well, the mid-range and tweeter need separate channels, so that’s 4 wires for each satellite – not an elegant solution for standard connectors. This is when the ATX cable comes in.

Corsair are now known just as much for its power supplies as its memory. So, taking a page out of its PSU business, it went with the ATX cable instead of the standard audio connectors. This actually kills 2 birds with one stone as it were. First, power; these cables and connectors are used for delivering reliable power and thus use a heavier gauge wire. Second, there are 4 pins/wires, providing the + and – for each of the 2 channels on the satellite (Mid + Tweeter).

Before you go screaming out ‘Proprietary till you’re blue in the face, you can calm down. ATX cables and connectors are not proprietary, they are just uncommon in the audio market. So the bad news is, you won’t be able to find a replacement pair of cables in a hurry – at least not in the audio section of retailers. The good news is that there is nothing stopping you from making your own with some 18 or 16 gauge wire and a couple 4 pin ATX connectors from a hobby shop. Some e-tailers even sell 4pin ATX extension cables.

Corsair has stated that it is looking into releasing longer cables than the provided 1.8 meters, as well as replacements for the current set. 1.8 meters may seem quite short to a lot of people when it comes to speakers, but again, this is justified by the fact that the SP2500’s are near-field speakers, meaning, they are meant to be heard from up to 2 meters away – about the max distance of your head from the monitor.

Extending beyond this and there is a dramatic roll off of high-end bass as the crossover kicks in from the sub to the satellites, about 100-150Hz+. Since the satellites have only 3 inch mid-range drivers, getting that extra oomph required for bass just isn’t going to work over a longer range. The second problem is that of stereo separation – or lack of it, as you’ll be confronted with central sound with no indication of direction, at least not without some very careful aiming and volume adjustments.

The short of it is that the cables provided should be adequate for the vast majority of users, but of course there will always be special conditions – like trying to use the speakers as part of a home entertainment system – which these were not designed to be, unfortunately.