After being left so impressed with Corsair’s Obsidian 650D chassis last month, we couldn’t wait to take the company’s Special Edition White Graphite 600T for a spin to see if it could match or surpass our expectations. Though similar in design to the original, the SE White has a couple of upgrades, and a whole new aesthetic appeal.

Hot on the heels of its Techgage Editor’s Choice awarded Obsidian 650D, comes another case from Corsair. This time around we look at a special edition white version of the previously released Graphite 600T mid-tower. This refresh features a different paint job along with other styling and performance changes, the latter of which came about thanks to Corsair’s listening to its customers.

Seeing how the original 600T was not reviewed on our site, I couldn’t wait to dive in and see what made it so popular and check out any improvements.

Wrapped in a white cloth bag and made of steel with plastic accents that wrap around the entire frame, the white Graphite 600T is just that; white. A re-launch of the original 600T, it supports micro-ATX and ATX motherboards. This time around the two 200mm fans have been upgraded to run at 1000RPM instead of 600. From what I have read on various forums, this was the major complaint from users, so it’s nice to see a company listening to what its customers have to say. 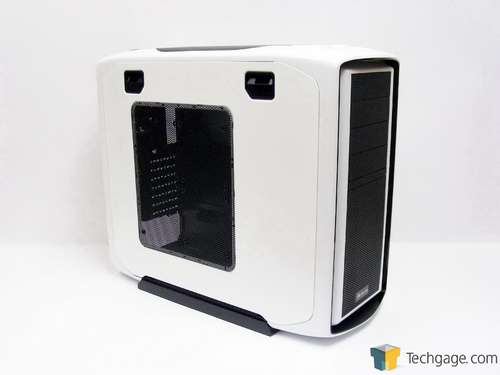 Ok maestro. From the top! Well, the front really, which is made almost entirely of a metal mesh surrounded by plastic accents. At the top of the mesh area are four 5.25″ drive bays. The bay covers can be removed by squeezing in on two tabs from within the drive bays.

Below those is a cover that hides a 200mm white LED fan. To remove the cover, simply press in at the top to disengage the catches and lift it away. All of the drive bay covers and the fan cover feature a filter on the backside to keep dust out of the system. Just as an FYI, the front fan cannot be replaced with more, smaller fans – so what you see is what you get for this one. 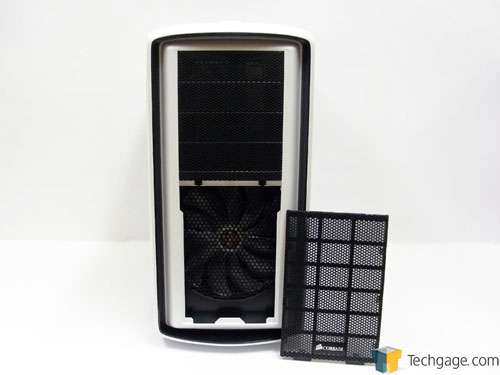 On the left side are two quick-release latches that have become a favorite feature of mine. Below those is a large window with black plastic trim that makes for a very clean, finished look. Where is the window you may ask? Well… 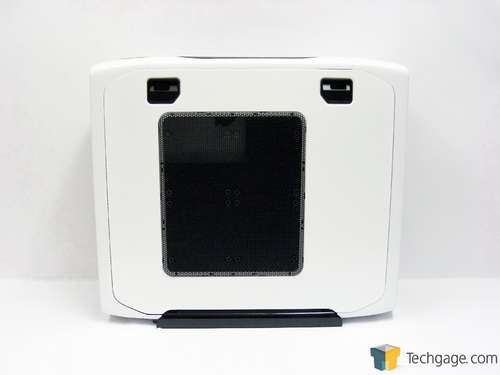 This panel allows for up to four 120mm fans to be installed if extra cooling is required. All of the mounting screws are included in a separate bag and rubber washers pre-installed to absorb any vibrations made by the added fans. For those who may be wondering, the window was swapped out because reflections are pain to deal with when taking product shots! 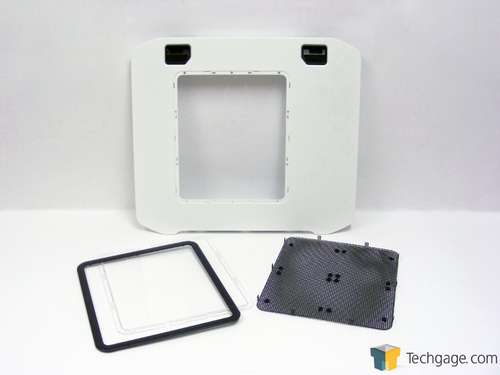 My laziness aside, the back of the 600T has the motherboard I/O opening and a 120mm exhaust fan at the top. Below that are eight vented PCI slots next to two holes with pre-installed rubber grommets to run hoses for water cooling and the opening for the power supply at the very bottom. 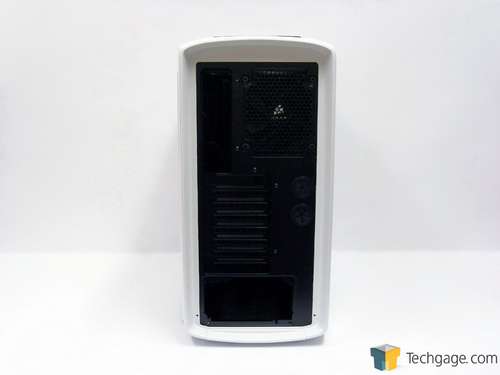 There isn’t much to talk about on the right side seeing how the entire panel is solid except for the same quick-release latches found on left panel. 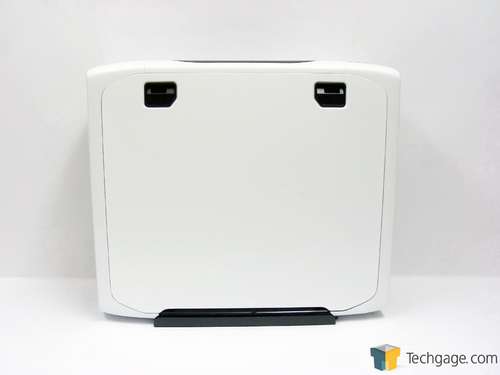 Up on top things start to pick up with the front featuring four USB 2.0 connections to the left of a dial that can control up to four fans. To the right of that, stacked on top of each other are the USB 3.0 and IEEE 1394 connections along with the hard drive activity light beside it. The USB 3.0 port can be connected to a USB port on the motherboard I/O while the rest of the ports have connectivity provided directly from headers on the motherboard itself.

A little further back are the 3.5mm headphone and microphone connections and the power and reset buttons beyond them. To keep with the white theme of the case, the power button glows white when the system is powered on as does the hard drive activity LED when a drive is accessed. 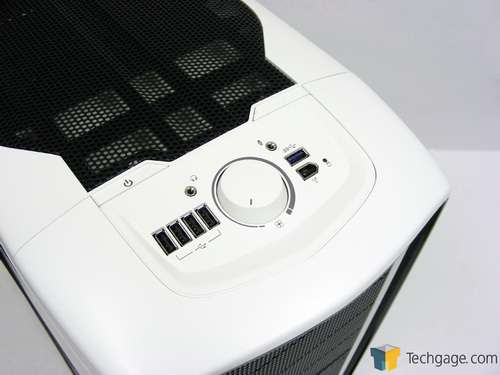 The rest of the top is taken up by a removable mesh cover that hides the second 200mm white LED fan. 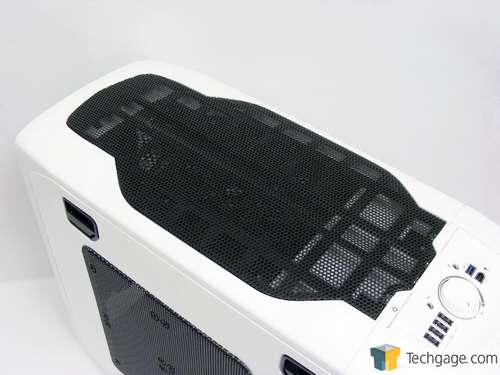 By pressing down at the back of the cover, it can be removed for cleaning and also allows access to the fan. Unlike the front fan, this one can be replaced with up to two 120mm or 140mm fans if needed. There is also enough room to mount up to a 240mm radiator inside the case with two fans on the outside under the top cover. 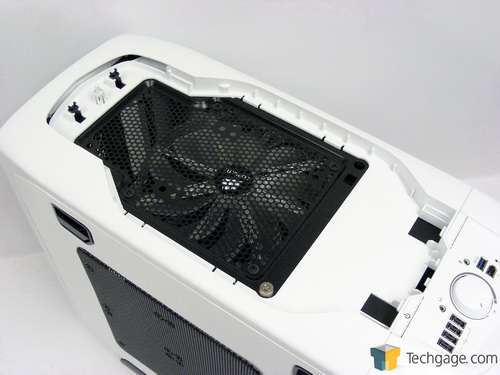 Also found under the top cover is a lock that ensures your components remain inside your system. Using the included keys, a quick turn flips a metal catch out, locking the left side panel in place. This should prove to be a welcome feature for those who visit LAN parties regularly. 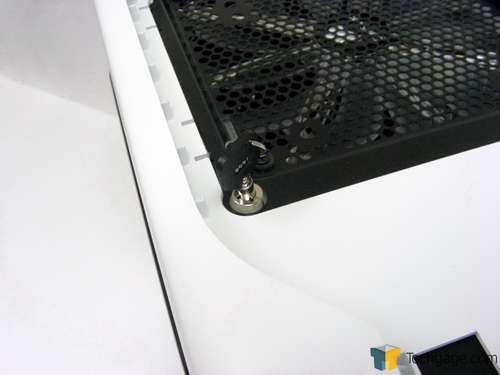 With the case upside down, the four rubber pads that make up the case feet can be found. These are attached to plastic stands that run down the sides of the case and lift it off the floor to help keep the power supply fed with fresh air. Speaking of which, the power supply has a removable filter than can be slid out the back for cleaning when needed. 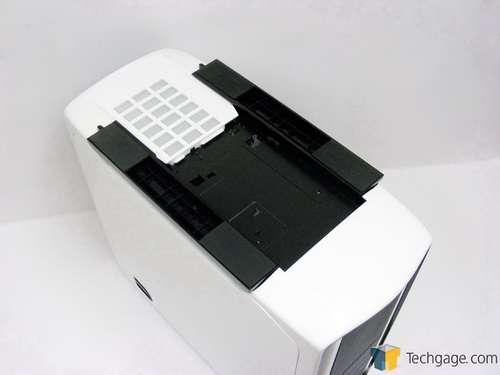 So it’s time to get those panels out of the way and have a look at what makes this case tick.