by Jamie Fletcher on April 25, 2012 in Peripherals

Corsair impressed us greatly when we took its K60 mechanical keyboard for a test last month, so we were anxious to see if we’d once again be wowed with its M60 “FPS gaming mouse”. From a hardware standpoint, the mouse is top-notch, but as we quickly discovered, it takes quality software to round out the entire package.

Continuing on with our review of the K60 keyboard, we have its companion, the M60 mouse – an FPS-orientated gaming peripheral from Corsair as part of its Vengeance series.

The M60 maintains the build quality set out in all of the Vengeance range, with brushed aluminum and a solid design and build quality throughout. The FPS emphasis with the Corsair M60 only really brings two major features with it, but these are important none-the-less. To begin with, a rundown of the important specifications.

The two major features of the M60 are the latter. The adjustable weights are not a single compartment, but separated across three; two at the front and one at the back. This allows for the center of gravity to be switched and it does make for an odd experience at first (the fact I noticed a difference is impressive enough). The Sniper feature is not exactly new, since I first reviewed something similar with the Mad Catz R.A.T.7., but Corsair improves things by making the button much larger and far easier to press.

We’ll get into more detail later, but first, some eye candy to ogle at: 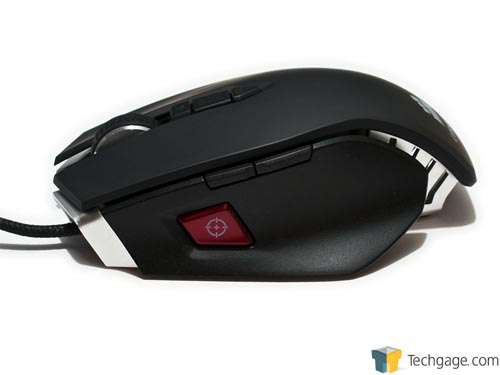 The M60 is a very angular mouse, and quite large too. The core frame is aluminum with both plastic and rubber coatings throughout. The shape is non-offensive and hands will grow accustomed to it quickly; I had no problems switching to this from a R.A.T.7. Notice that the scroll wheel is a solid piece of aluminum with a rubber grip. This gives the scroll a very solid and stable feel while scrolling, without being too firm. 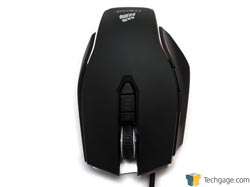 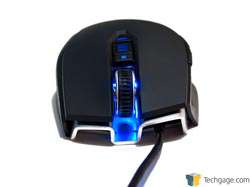 There are two buttons on top used for the DPI adjust between three levels. These buttons are illuminated, along with the scroll wheel. 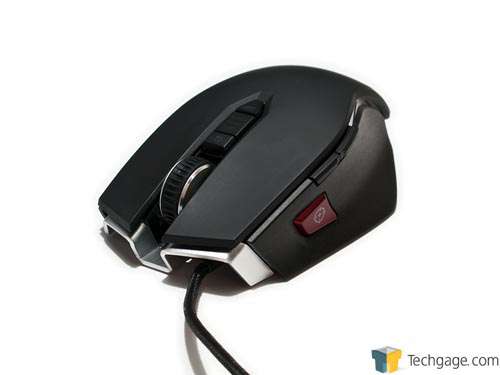 On the left side are the obligatory buttons 4 and 5 for back and forward browsing. Also included is the large ‘Sniper’ button. There is some poor quality ink used on this button, designating a crosshair symbol. In the process of testing, the logo was simply worn off by my thumb. Not horrendous, but the mark isn’t really required.

I was first introduced to the Sniper button with the R.A.T.7, but it was too small and far too stiff to be practical, especially on a high-sensitivity mouse. Corsair has made this button significantly larger and far easier to push. The other change was to the way the software handles the DPI drop. With the R.A.T.7, the DPI switch was a percentage-based reduction in sensitivity, this meant the sniper DPI changed based on the current DPI level (at 1800DPI with Sniper set to 20%, the effective DPI was 360, but at 5000 DPI, the sniper mode would be 1000DPI); the M60 switches to a fixed DPI level when the button is pushed, regardless of the current DPI level. 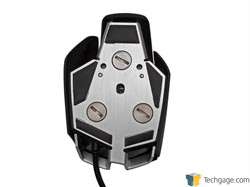 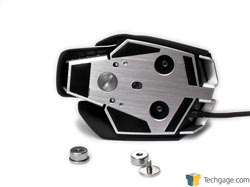 On the underside, we get a better idea of the aluminum body and weights. Due to the way the weights have been placed, the center of gravity can be changed and the effect on the way the mouse behaves is quite odd. The change is largely based on how you use the mouse in the first place, i.e. your grip. Do you move more with your wrist, fingers or arm? Sensitivity will play a part too, but it’s worth experimenting. The total weight that can be removed is 21g.

The PTFE feet provide plenty of low friction when gliding around, but most importantly, there is no ring around the laser sensor, so it won’t be filled with dust after a while.

Corsair has gone with an Avago ADNS-9500, rather than one of the more common (with gaming mice) Phillips sensors. This is a 5040 DPI sensor, but Corsair claims its to be capable of 5700, so it’s either clocked higher or there’s some software trickery involved. A very common problem with the Phillips sensors (such as the Twin-Eye) was that of z-axis shift, the cursor would move diagonally when lifting from the mat, plus it was very sensitive to vibration, often leading to drifting cursors or wake from sleep.

The 9500 is not a flawless sensor, but one with fewer problems than the Phillips. The main complaint is that of an inherent inconsistent acceleration, be it positive or negative (the cursor will move more or less than the desired distance), even if acceleration is disabled at the driver/OS level. For the most part, I haven’t noticed, but from what I’ve read, the acceleration issue is mainly at low DPI levels (400-800). I run the M60 at 5000/3900 XY DPI with Windows sensitivity set to 7/11. So if you are a low DPI user, you may want to look for another mouse.