by Jamie Fletcher on April 25, 2012 in Peripherals

Corsair impressed us greatly when we took its K60 mechanical keyboard for a test last month, so we were anxious to see if we’d once again be wowed with its M60 “FPS gaming mouse”. From a hardware standpoint, the mouse is top-notch, but as we quickly discovered, it takes quality software to round out the entire package.

It has to be said that with nearly every peripheral I get in to review, the software is the biggest weakness, and unfortunately, this is the case with the Corsair M60. All of the Vengeance peripherals by Corsair do not come with a software CD, so you will need to download them direct from Corsair’s website. At the moment, the best version you can get is the 2.12 beta driver. Yes – a beta driver, not exactly a good start.

I’ll be honest here, Corsair does have a ways to go with regard to the software, more so with the K90 and M90. The M60 doesn’t need the same level of software configuration as it’s macro-based brethren, since the important options are DPI-based. But if you decide to delve into macros with the M60, be prepared for a number of issues – explained later.

Once installed, the interface itself is pretty and functional, keeping things on the simpler side rather than bright and gaudy. The good thing here is all the peripherals in the Vengeance range appear in a single interface (minus the K60, which has no software). So you won’t have a taskbar littered with different icons for each device. You can switch between peripherals via the arrows near the top right corner.

There are three main tabs, Assign Buttons (macros), Manage Performance (DPI settings), and Manage Profiles (for storing macros on the mouse for hardware playback). Apart from macros, each is largely self-explanatory. 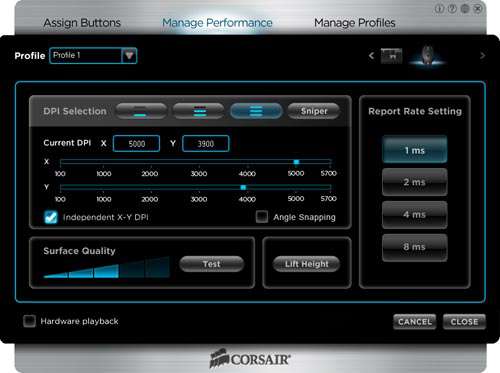 The performance tab will likely be your first call, since the macro features are incomplete at present. There are three DPI levels, plus the Sniper, each can be assigned independent x/y axis control. Angle Snapping (or prediction) controls whether you want the software to assist in keeping lines straight (or circles square). There are two interesting features here as well, Lift Height and Surface Quality test.

Lift Height is as its name suggests, controls at what point to stop tracking when it detects it’s been lifted from the surface. There is little point dropping below ‘middle’, as this will likely lead to jitter on most mats. Surface Quality is a bit of a mystery to me, as what it detects as good and bad are very odd, plus I’m uncertain as to whether it makes a difference beyond a mere test. I currently use a Razer Goliathus Omega mat, which according to the surface test, scores 3/5; a glossy magazine or plastic surface scores 5/5, indicating a favor for light glossy surfaces. This is somewhat counter-intuitive compared to a lot of other sensor preferences. However, even with my mat’s measly 3/5 rating, it tracks just fine.

Assign Buttons is the macro management tab, allowing you to switch button orders, record macros and toggle the lights. I will point out now that macro recording is incomplete since you cannot record mouse clicks (of any type), just keyboard keys. For the most part, this isn’t a huge issue for the M60, as it doesn’t have many buttons spare for programming in the first place. Buttons 4 and 5 are usually available in games anyway, leaving just the DPI switches on the top of the mouse, which are not easy to access.

Hardware playback is probably something you’ll tick straight on as it saves any macro configurations directly to the mouse, which increases compatibility with games, though you are limited to the number of profiles that can be saved. This is important as any commands saved to the mouse will be reported to the game directly, rather than through the OS hardware buffer (which some games ignore, to prevent the use of software macros). The problem with the M60 is that you can only save one profile in hardware, since it has no profile switcher (you can still save multiple software profiles) – though, saving to hardware risks turning your brand new mouse into a paperweight. Wait, what?

Yeah… in the process of reviewing this mouse, testing the macro functionality, I somehow managed to disable it’s surface tracking. The lights were on but nobody was home. It could detect button clicks, but no matter how far I flung it around, it wouldn’t detect any movement. Thankfully, I have a number of spare mice laying around and managed to check Corsair’s forum to discover I wasn’t alone. There may be a bug regarding the hardware playback feature and custom DPI settings. If you manage to do the same as me, download the firmware update. This will reflash the M60 back to default and you should be able to recover it. At least it did for me.

There are other gremlins too; again, playing around with the macros, somehow the left and right buttons became inverted (despite them appearing correctly in the main interface), so I was right-clicking everything till I figured it out. Switching to the Profile page and re-uploading the profile to the mouse fixed it. So, for the time being (or until a new version of the software is released, currently the 2.12 beta) DO NOT USE MACROS, at least with the M60. 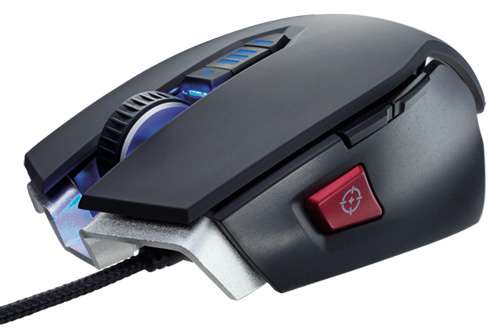 So the software is still a bit of a mess, but the hardware is fantastic. The switches used for the buttons are sharp and responsive (possibly Omron), requiring little force. The only problem was the middle mouse button being excessively firm compared to the other switches (the middle mouse on the M90 was softer but may use the same switch, possible batch variation?).

The Corsair M60 tracks on pretty much every surface I tried, including glossy plastic, so any mat will do. The aluminum frame does mean it’s a little heavier than the rest, but you can shed up to 21g by removing the weights. The scroll is very precise and sharp, and quiet. The Sniper button is actually practical now and I’m slowly starting to remember it’s there. Small aim adjustments become much easier when using high DPI settings.

As stated on the previous page, the Avago 9500 laser sensor didn’t prove to be a problem for me personally, due in part to the higher DPI. If you are after a mouse for low DPI, just bare in mind the 9500’s history of positive and negative acceleration.

The real problem lands straight on the software. Until I hit the glitch, which nearly bricked this mouse, I was ready with an Editor’s Choice. Now I’m not so sure. So for the time being, I’m holding off – at least until the software matures. When an update is released, I’ll revise this if I think it’s safe, so keep an eye out and leave a comment in our forums.

Brilliant hardware and a fine entry for Corsair. All that’s left is to polish the software.