When we took a look at Corsair’s M60 “FPS” gaming mouse a couple of months ago, we found that while the hardware was excellent, the software was less so. For the M90, we decided to wait for the relevant software updates, which has since happened. So, after a delay, it’s finally time to take a look at Corsair’s “MMO” M90.

Peripheral software for mice and keyboards are always a make or break feature. If it can be pulled off properly; easy to use, cover the majority of common features and not blow up in your face, it’ll likely be a good product. More often than not, the software tends to be designed by a 5-ear-old, putting all the cool glitz in, snazzy animations, the word ‘extreme’ in a few dozen times, then watch it set fire to your parents living room, taking your priceless PC with it.

OK, OK, things are rarely that bad, but when saving profiles causes the device to turn into an electrically operated paperweight, that warm fuzzy feeling of fondling your latest gadget quickly turns into an overwhelming urge to throw something out of a ninth-floor window. This was the case with the original M60 mouse, before the recent slew of patches from Corsair.

So what’s changed in the software? Well, devices shouldn’t brick themselves anymore for a start, but there are a fair number of improvements too. Mice can now have buttons assigned as key presses. Originally, when a macro recorded a key, it would record it as a ‘down-up’ event with a small delay. This is fine for key presses like numbers for abilities, but if you mapped a key for TeamSpeak or Vent, it would only activate for the 50ms delay that was on the down-up event. Now, buttons can be told to behave like a keyboard event, so the key remains active for as long as the button is pressed.

Another improvement or ‘fix’ is that macro playback no longer interrupts keyboard events. If you were running with the W key, then hit a macro for ‘9’ on the mouse, you would stop running forward – highly infuriating and could potentially kill you (for realz!). This no longer happens. 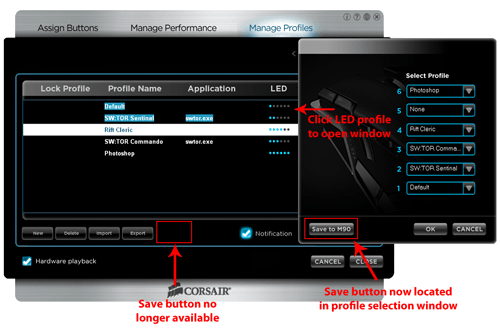 There are a bunch of small changes too relating to stability, macro overwrite and such, the full details are in the PDF provided with the software update. However, as of yet, the software can not record basic mouse functions, such as left or right mouse buttons, for the purpose of an auto-clicker or modified mouse clicks with CTRL or ALT.

Now, much of the software is very similar to what was discussed in our M60 and K90 reviews, so I will not repeat it here. However, there are a few changes, specifically regarding profile management and saving profiles to memory. With the K90 and M60, it was just a simple case of pressing the ‘Save to M60/K90’ button to upload profile settings to the device, but for some reason, the M90 decides to hide the option. 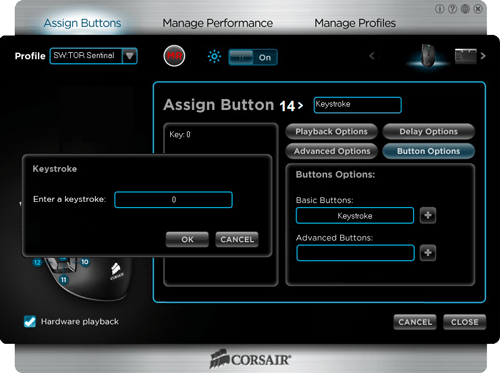 Clicking on ‘Manage Profiles’ shows a lack of a save option; now instead, you have to click on the LED indicator to the right of the profile to open the manager, then select save. I was stuck for a few minutes trying to figure out where the option was, and only landed on it by accident – not the most intuitive process. Maybe setting a default profile indicator with each new profile and keeping the save option in the main bar would have been better, to maintain continuity.

Apart from that, the software remains the same, but with the new option to set a keystroke instead of record a macro. Select a basic function, click the bar to select keystroke from the drop-down menu, then click the ‘+’ icon to enter the new key. The button will now behave like that key.