Even though it’s a modest product, the thumb drive market is fierce. There’s so much competition, it’s hard to have an edge. Back in October, we took a look at the OCZ Rally 2GB drive, which was a bold move forward for them. It incorporated dual channel memory for super fast reads and writes. Without a doubt, that has been one of the most popular thumb drives as of late. 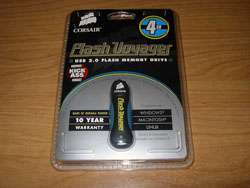 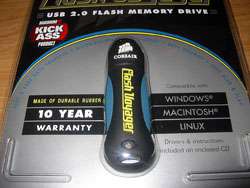 If you want pure speed, then the Rally is a very good choice. But what if you want extreme durability and a lot more space… say 4GB? That’s where Corsair comes in, and this drive still offers the same speed as the smaller models, despite the larger storage. It’s hard to believe that we are at this point already, because just not long ago, a 1GB thumb drive would cost you at least $300. Even at that time, the drives were very slow compared to the ones we have today.

Corsair is offering this 4GB thumb drive for a very competitive average price of $230US. This is approximately $29US per 512MB. If you were to buy 8 512MB versions of the drive, you would be looking at $304US. In the day where a 1GB cost over $300, if you wanted a bigger drive, you were not saving any money by buying one. Now, if you want bigger, you do save money per MB as we can see. 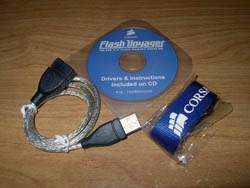 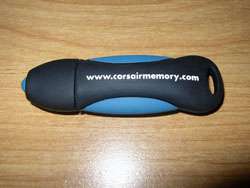 Who may need a thumb drive? For people who are always on the go, it’s almost a necessity. The ability to simply plug in a thumb drive to copy files to is much simpler than burning something to a blank CD… and it’s much smaller as well. Maybe people still rely on CD-R’s, but there’s no comparison with the speed. With a thumb drive, you have the ability to format, move files and edit files far easier than on a CD-Rom. One thing I personally hate, is working on someone’s computer and not having the right tools on hand. With a large thumb drive, I am able to keep everything on there that I need, such as anti-spyware and other diagnostic tools. This is my personal favorite thing to use the drive for, but there are really countless reasons that a thumb drive can be useful.

The size of the Voyager is of course very small. It’s larger than the OCZ Rally drive, but that is because the Voyager has a thick rubber chassis. The point for this is of course to add to the durability. If you accidentally happen to run this thing over with your car, it may have a better chance of surviving than some other drive on the market ;) 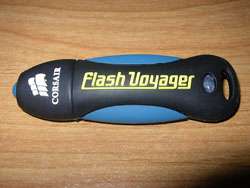 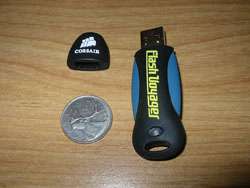 On one side of the drive is the Corsair logo, which is on the cap. Flash Voyager is written in yellow text on the same side. On the opposite side is the Corsair website address, just in case you may have forgotten it. The cap is easy to take off and to put back on, but it’s not loose enough to fall off during some travel. On the opposite end of the drive is a hole, so you can keep it on your keychain. Finally, there is a small plastic LED light which lights up when you plug it into your computer. It’s hard to see, but on this LED, it will state the size of the drive. Overall, this is a good looking thumb drive, that should prove extremely durable.