In order to test the drive, I first ‘break it in’, by copying a 4GB file to the drive, then formatting it. I will repeat the process twice, because I’m crazy like that. I format it by right clicking the drive in Explorer and using normal mode. The drives original file format is FAT, but once you format it will be FAT32, but will still operate the same. Once the drive was ‘broke in’, I used both SiSoftware SANDRA’s flash drive benchmark, in addition to HD Tach RW.

Different USB Thumb Drives have different speeds, this one being 19MB/s READ and 13MB/s WRITE. Since these are the advertised speeds, we hope to bench at those. 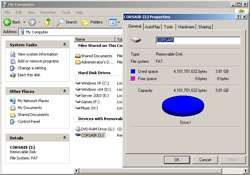 Let’s start off with SANDRA, which is one of the worlds leading benchmarking tools. The huge bonus with SANDRA is that it’s free, and offers numerous tools to stress your system.

I performed the SANDRA tests on my Dell Inspiron 2.8GHz P4 laptop, because it was quirky on my desktop. I’ll let the graph speak for itself.

My personal favorite storage benchmarking tool would be HD Tach. I personally find that SANDRA’s benchmark results can jump all over the place, but HD Tach’s results are always tight and don’t vary much. HD Tach also includes a Write test as well, which is important when testing such a drive. 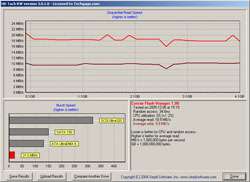 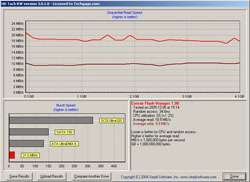 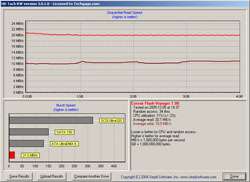 According to HD Tach, the speeds are close to the what’s advertised on the package. The Extended Zones test even gave us a higher READ result, at 20.1MB/s. The highest we have been able to get the WRITE though, was 10.5MB/s, which is still 2.5MB/s slower than advertised. This may not seem like like much, but technically speaking, copying a 2GB file would take almost 20% longer to copy.

For our real world tests, I created archives in 1GB, 2GB and 4GB sizes. I copied the file one at a time to the drive, timing it with a stop watch. Once the file was copied, I then copied the file back from the thumb drive to a different hard drive than the one that had the originating file. To get an idea of the length of time it takes to copy numerous files, I copied the My Pictures folder to the clean drive, which contained just over 2GB worth of photos totaling 2,279 individual files. 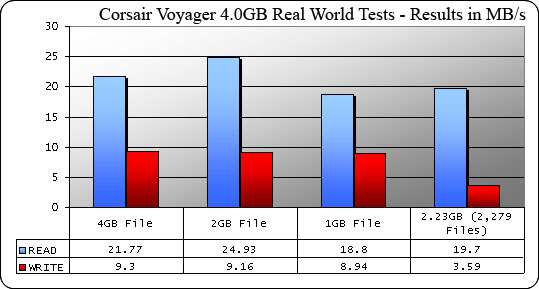 Once again, the READ speeds kept right up, and even surpassed what Corsair said it could do. The WRITE speeds are still certainly not up to 13MB/s though. Overall, I’m happy with the speed, but I would have liked to see the WRITE actually stay at 13MB/s as advertised. It’s almost like the READ took MB’s from the WRITE, which is why it’s usually higher than 19MB/s :)