Futuremark PCMark 08: Normal settings are used including the default setting of three runs. This gives us an extended test that takes roughly 45 minutes to complete, resulting in a sustained load that will thermally challenge drives. The free (demo) version is available on Steam for general use.

AS SSD: This handy little utility was custom-written for solid-state drives. We selected this program as by default it utilizes incompressible data and bypasses the Windows cache. This is another free program anyone can use to quickly test or verify normal performance of an SSD, available here.

ATTO: The bar graphs generated by this utility provide a huge amount of data in a condensed format. It is extremely handy for detecting problematic file sizes, performance bottlenecks, or simply inconsistent performance that can be hidden when viewing final performance averages. Though this is significantly less of a problem today as solid-state drives have matured, it remains an essential performance verification tool of any benchmark kit.

RoboCopy: This is Windows’ command-line utility included in most versions of Windows and provides for features beyond the default file copy handling of Windows Explorer. More information is available here. Windows Defender is also disabled to prevent bottlenecking the folder copy. We utilize a 9.81GB Movie file, and separately a 1.6GB Folder with 11,511 files across 449 subfolders and measure the performance to copying the data to and from a RAMdrive.

RAMdrive: Primo Software’s Ramdisk utility is a handy, convenient way to create a 12GB direct-IO ramdisk, meaning no indexing or caching is utilized and removes any bottlenecks associated with another storage device. File performance varies by I/O size but exceeds 6GB/s above 16KB IOPS. 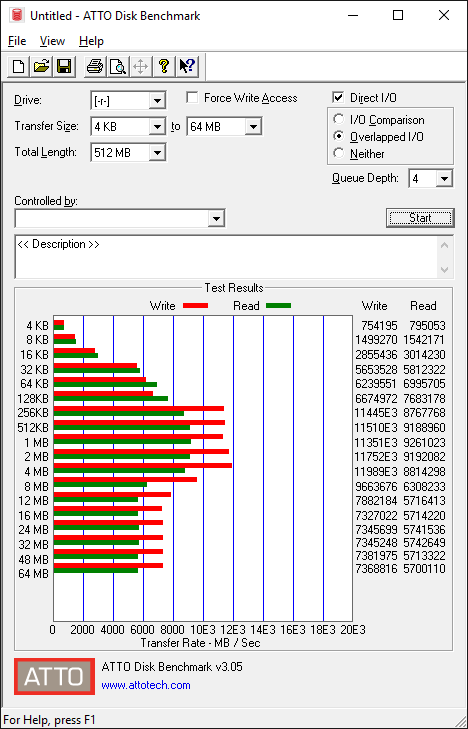 dBpoweramp R15.3: We convert 500 FLAC encoded music files (14.4GB) into Apple Lossless encoded files for playback on Apple devices. As no lossy compression is taking place, this minimizes the CPU workload while maximizing the amount of data written to the destination drive. Unfortunately this test would show more variance in results for systems with greater than four cores as dBpoweramp will fully load almost any size processor.

IOmeter – The most powerful piece of storage testing software freely available, IOmeter allows the creation of practically any kind of test workload. We first utilize it to dirty every new SSD before we test the four basics of every solid-state drive. We measure random 4K read and writes at 1QD and 32QD, as well as 2MB sequential read and writes with a queue depth of one. Each one of the six tests is run with a ten minute duration.

Additionally we have added Database, File Server, and Workstation scenarios back into our regular testing.  We have updated and modified the original three workload scenarios to bring them more in line with changes in workloads and disk IO sizes, so these results are not comparable to the test scripts originally created and included with IOmeter nearly two decades ago.

If you are still reading our benchmark profile, thank you! It is not easy to devise tests that can tax a modern solid-state drive so if you have any suggestions or perhaps know of any applicable software that you would like to see added to our test regimen, please let us know. We are especially eager to add disk I/O trace recording and playback to replace the batch file testing we utilized in past storage reviews. We are still looking into how to make this possible, so if you know of a piece of software that is free or doesn’t cost a few grand please do drop us a note! 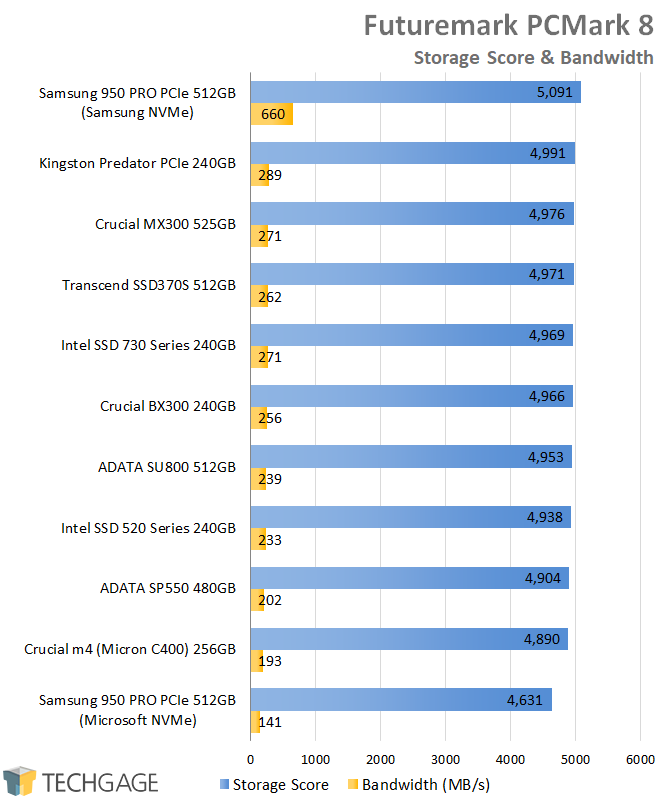 The BX300 kicks off with solid performance as the highest performing budget drive we have tested to date. If it wasn’t for the capacity difference between the 240GB BX300 and 525GB MX300 the two drives would be even closer in the chart. While we don’t have a BX200 on hand it is safe to say it would place much closer to the older m4 drive than the BX300 in our review.

Speaking of which, the m4 slots in last place in our graph if we ignore the outlier 950 Pro using the Microsoft NVMe driver. The SATA 6Gb’s interface has remained unchanged over the last six years, but SSD performance (most notably in the areas of consistency and sustained load) have come a long way since then. 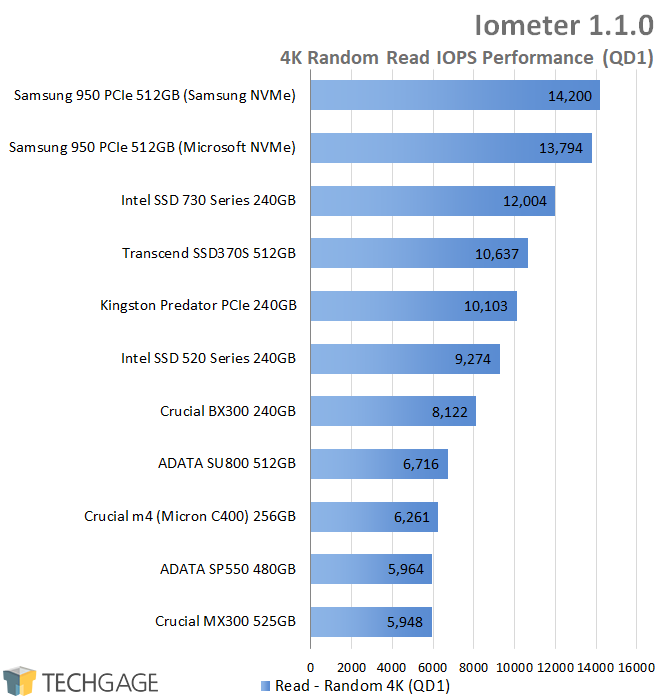 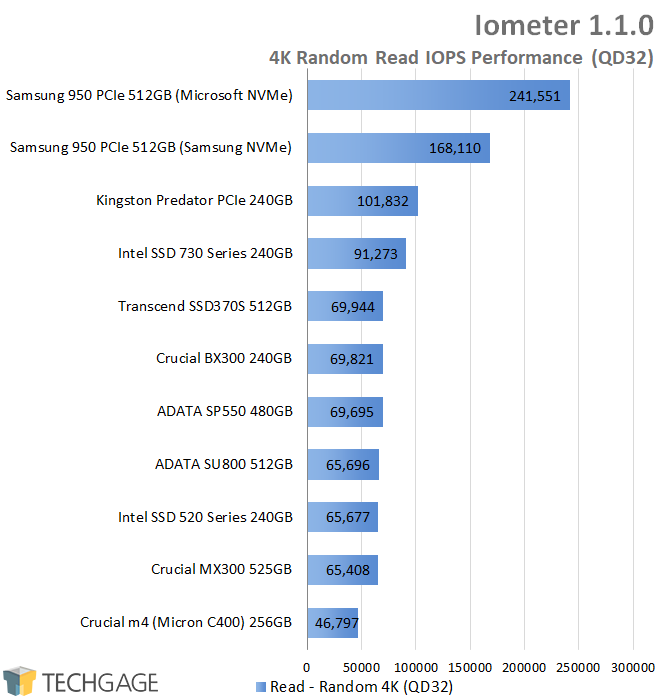 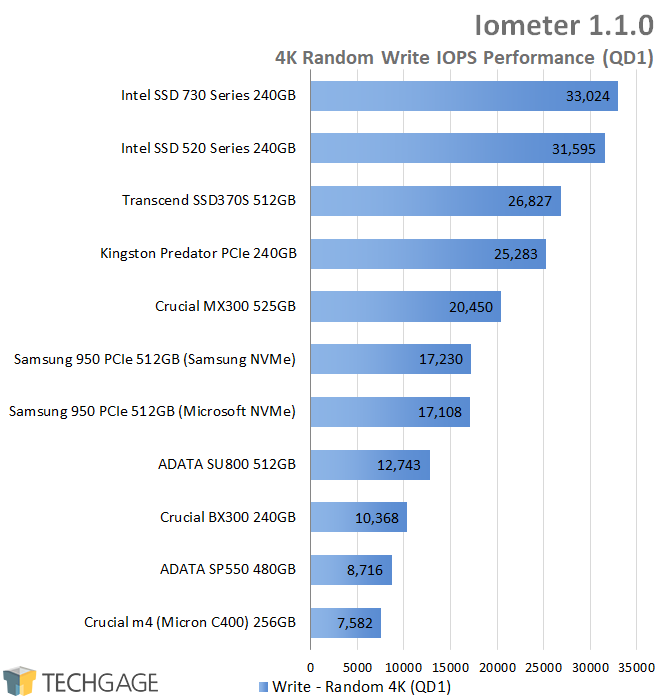 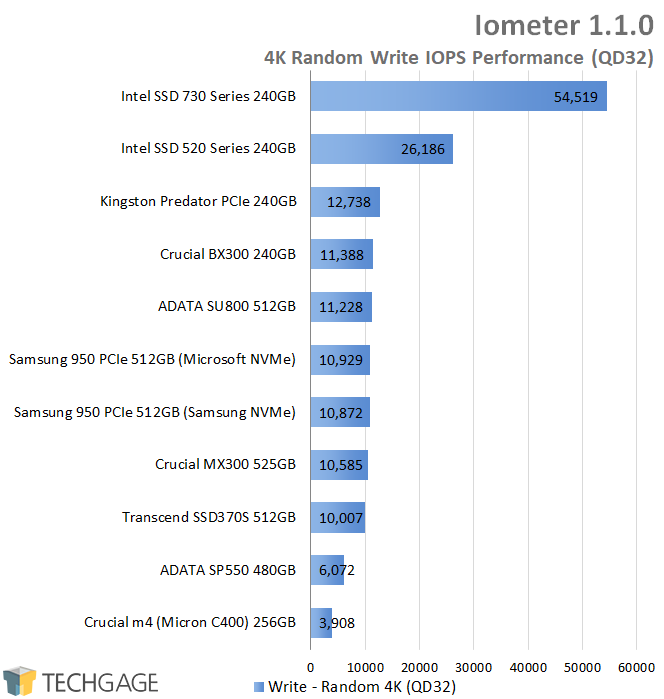 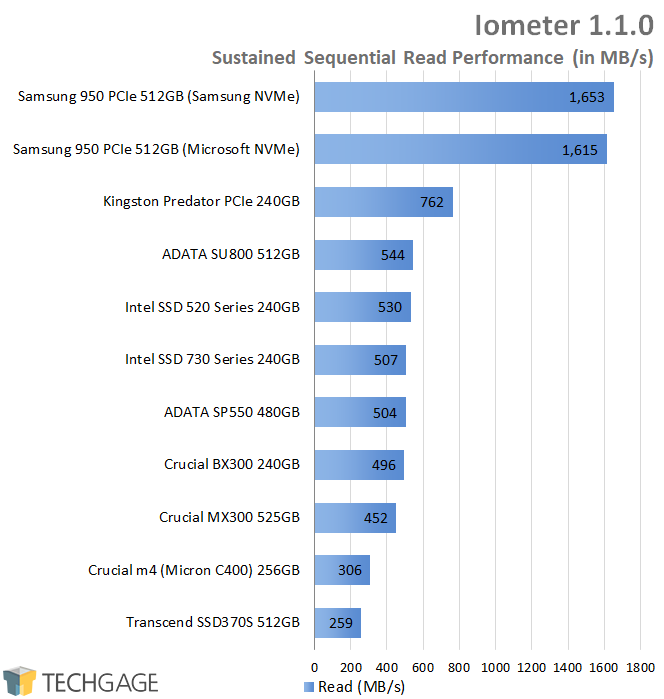 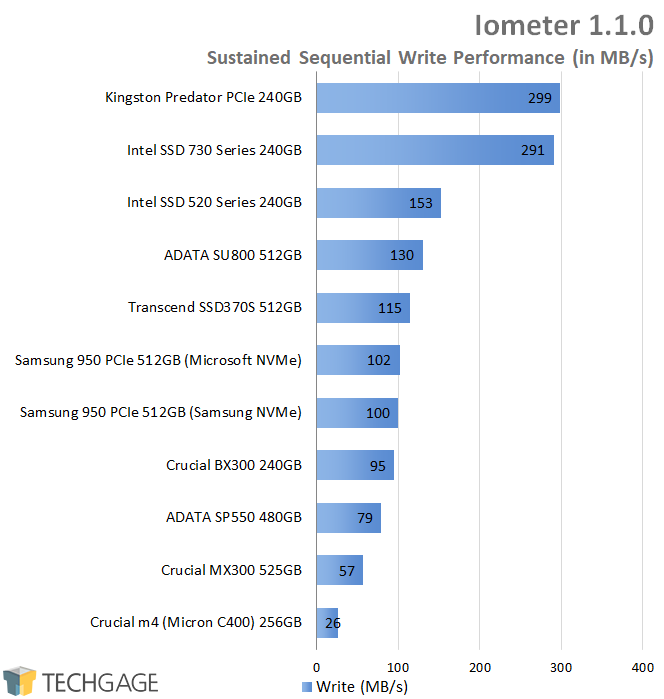 One thing to keep in mind is Iometer creates a test file that spans the entire size of the SSD. So it should come as no surprise that this mostly negates the SLC caching performance of the BX300 and other SLC-caching drives. While this allows us to see the raw performance of the NAND, ten minute saturation workloads are not even close to representative of the sort of work consumer drives would see in normal consumer use.

With that caveat out-of-the-way the BX300 delivers surprisingly good performance. In fact the BX300 does so well that it almost appears the MX300 and BX300 are in the wrong places in our 4KB read graphs. What has occurred is that the MX300 still uses TLC NAND, and as you recall the BX300 has reverted to using faster MLC grade NAND. Even with its larger capacity and over-provisioning the TLC NAND in the MX300 simply can’t match the MLC NAND in the BX200 once the SLC fast-cache is removed from the equation.

The story repeats itself with the sustained sequential read and write tests, with the SLC caching completely filled the MX300 eventually falls behind the BX300 in sustained reads and writes. More than anything else this shows that Crucial has seriously upgraded the performance of its newest budget BX300 drives. 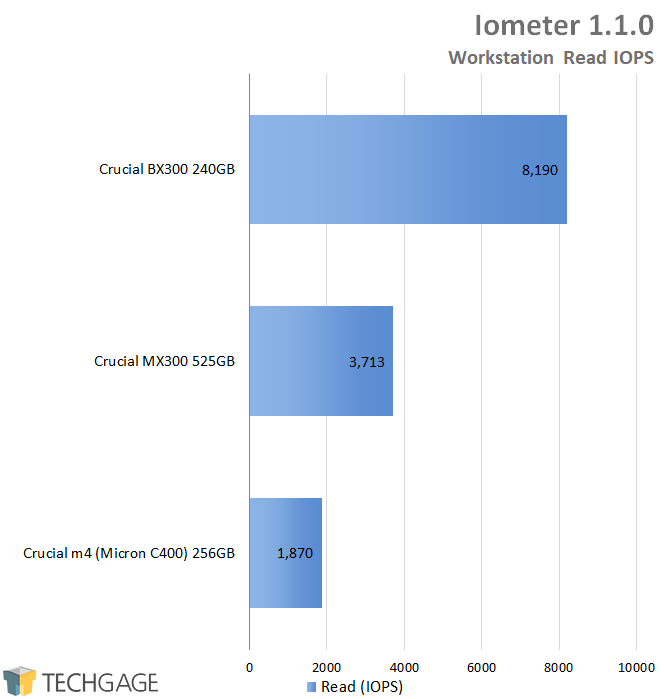 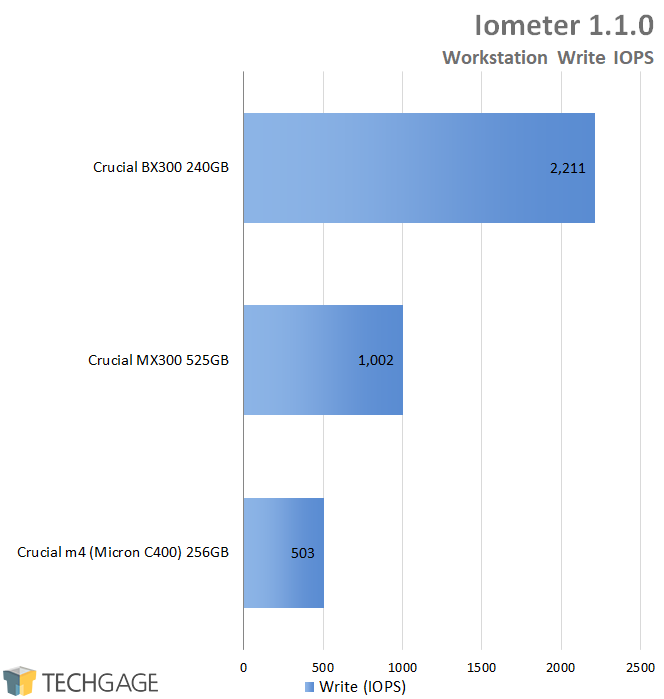 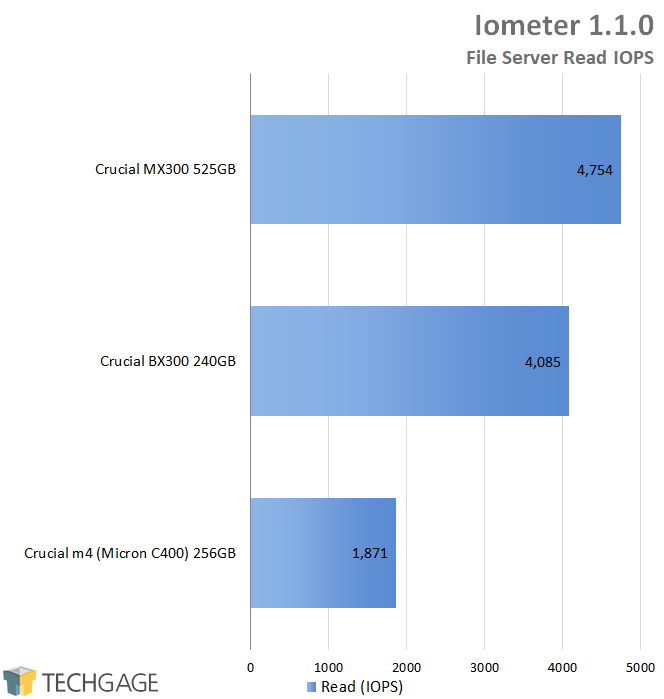 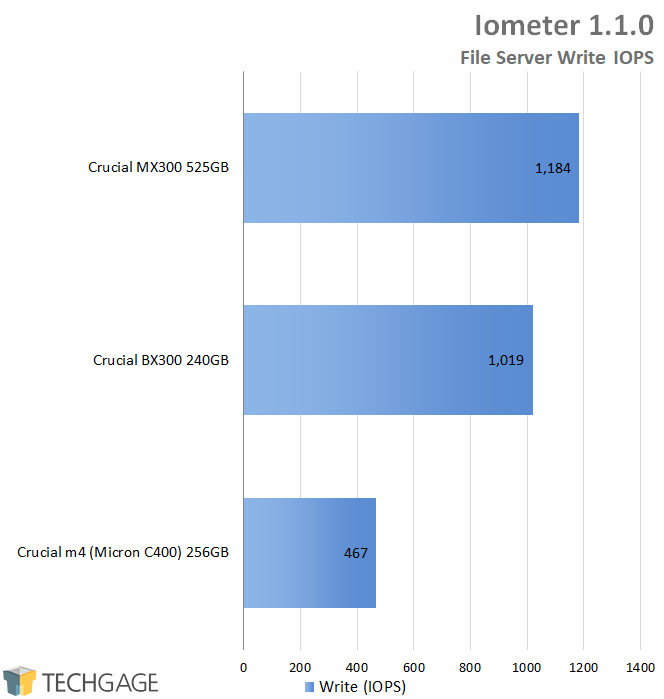 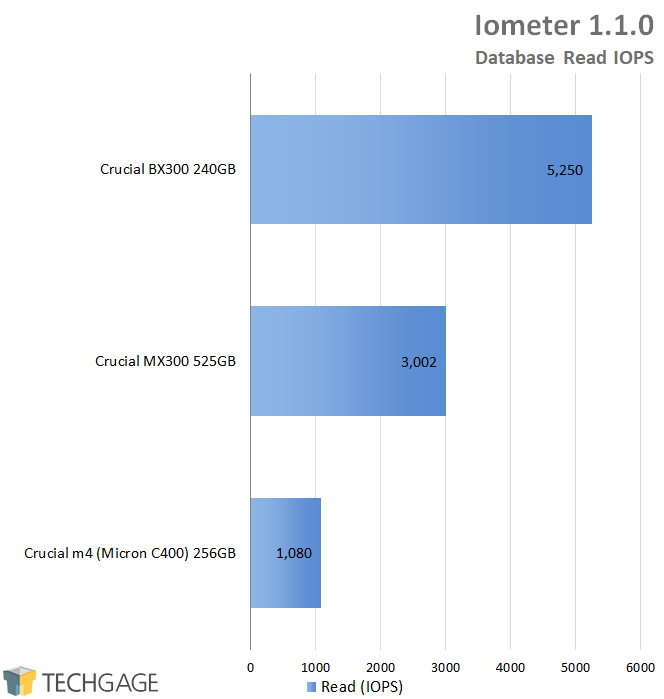 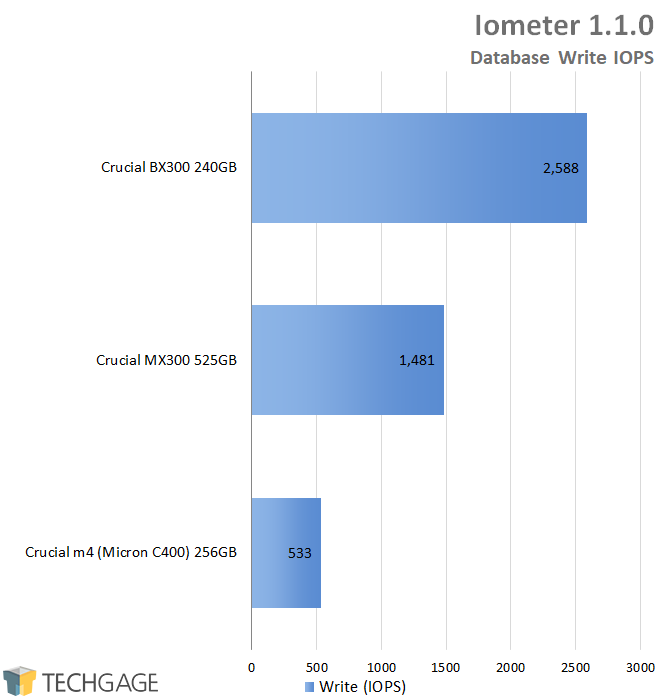 Our new Iometer scenarios are more appropriate for enterprise and data-center SSDs, but due to the dearth of consumer workloads that will stress modern SSDs we have recreated the original Iometer usage scenarios with some modern settings. Each of the three scenarios runs for twenty minutes with minimal time given for the SSD to perform maintenance tasks like garbage cleanup or clearing any SLC fast-caches (if applicable). These tests are a worst-case scenario intended to highlight the hidden differences between solid-state drives.

The BX300 seems to excel at smaller 4KB focused tasks and bests the MX300 in our Database and Workstation scenarios. Our file server scenario utilizes request sizes up to 64KB, here the MX300 regains its lead though the BX300 is not far behind. Given the MX300’s size advantage (and performance advantages it entails) this is a very impressive showing for the BX300.

The six-year-old Crucial m4 SSD does not have an SLC fast-cache and was limited in write performance back in its day. Evidently the m4 has not aged gracefully in the last six years. Clearly as far as intensive workloads are concerned users on much older SSDs may see tangible benefits to upgrading to a modern solid-state drive. 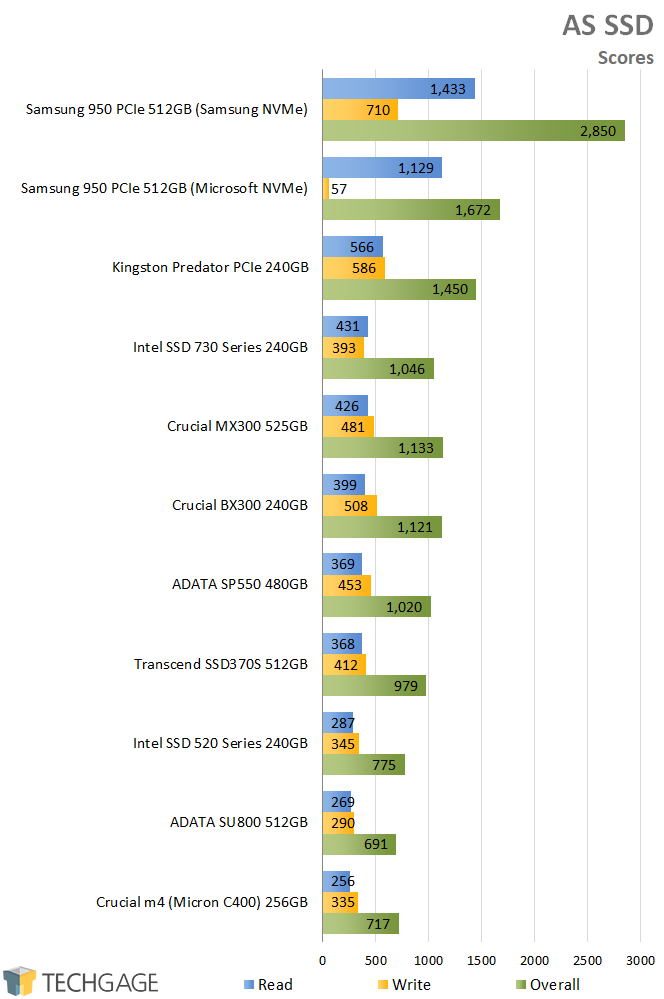 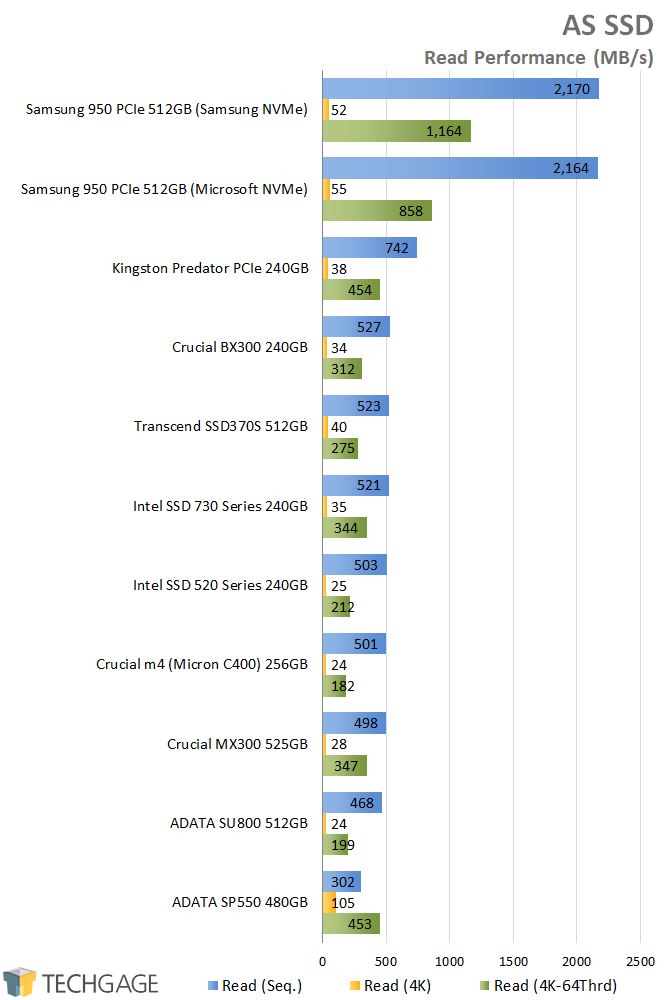 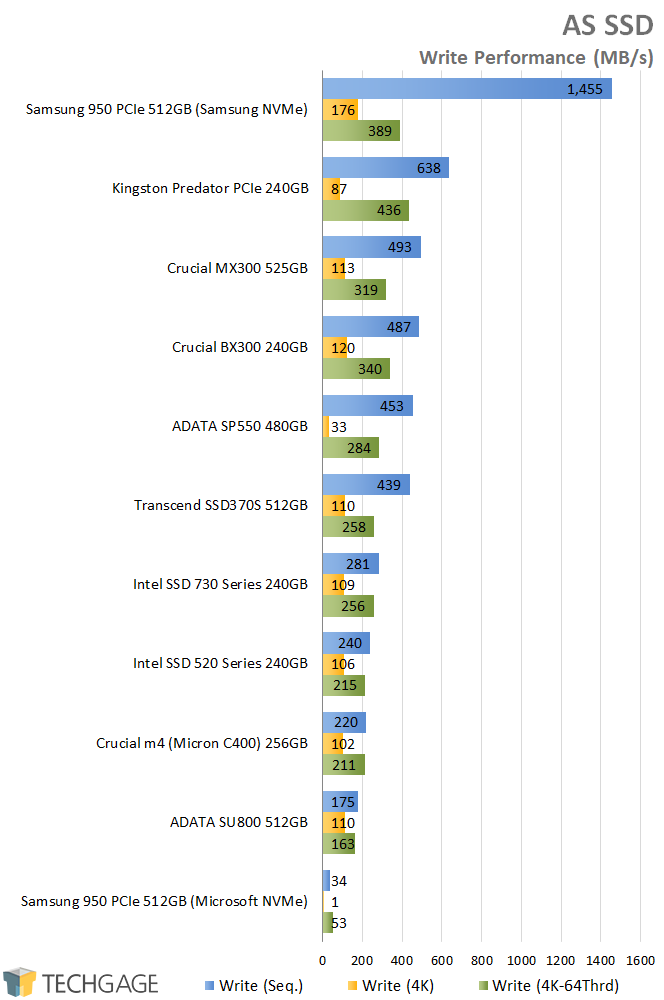 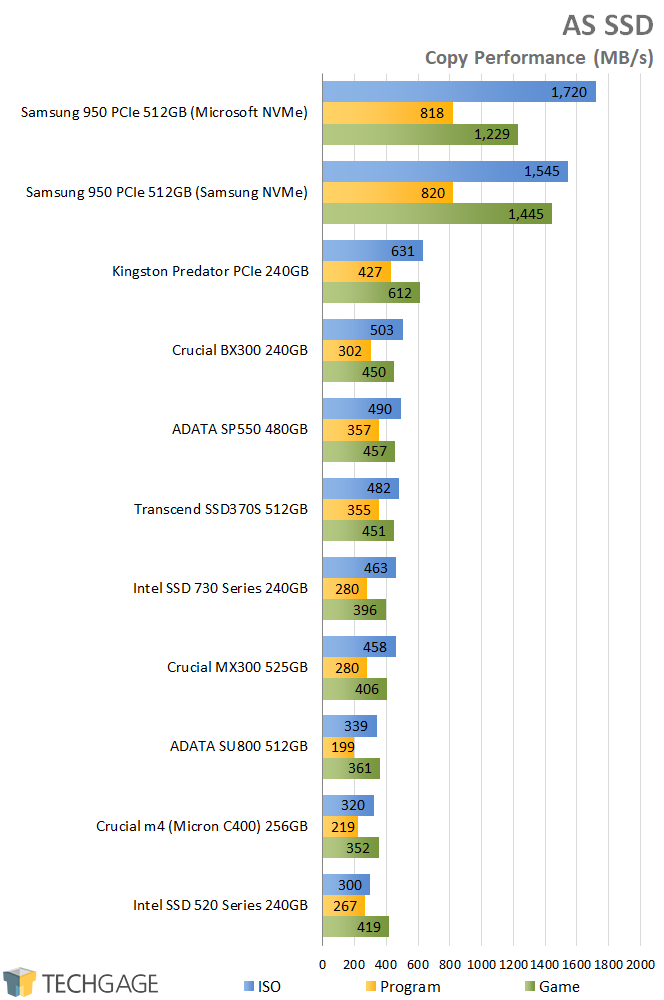 The Crucial BX300 ranks just below the MX300 in AS SSD’s overall Scores, yet both drives are frequently trading places across all the charts showing that the drives are fairly evenly matched in performance. This is surprising given the MX300 has a larger SLC cache, larger capacity, and more overprovisioning to work with. The strong performance of both drives, despite being powered by 4-channel controllers, also highlights the advantage to fast SLC-caching solutions.

Even better the BX300 doesn’t display the odd hiccup measured by the MX300 in the access latency test. To the user there isn’t any palpable difference between a millisecond and a microsecond, but in CPU time frames this still equates to a tremendous difference.  0.029 milliseconds works out to be 29 microseconds, a very good latency for a budget drive. Anything in the 100s of microsecond range is a bad thing and can mean the drive lacks a DRAM cache, is overwhelmed processing non-related overhead, or a driver problem.