Once again there is very little difference between the MX and BX model drives, both deliver 500MB/s or better at 32KB access sizes and above.  This program emphasizes better than most the hidden performance limitations that used to be common in earlier generation solid-state drives, as the m4 results differ drastically with the drive capped around 280MB/s writes regardless of access size. Drives like the m4 are still much preferable to spinning rust, but the performance differential between it and new drives such as the BX300 would easily be enough to justify an upgrade. 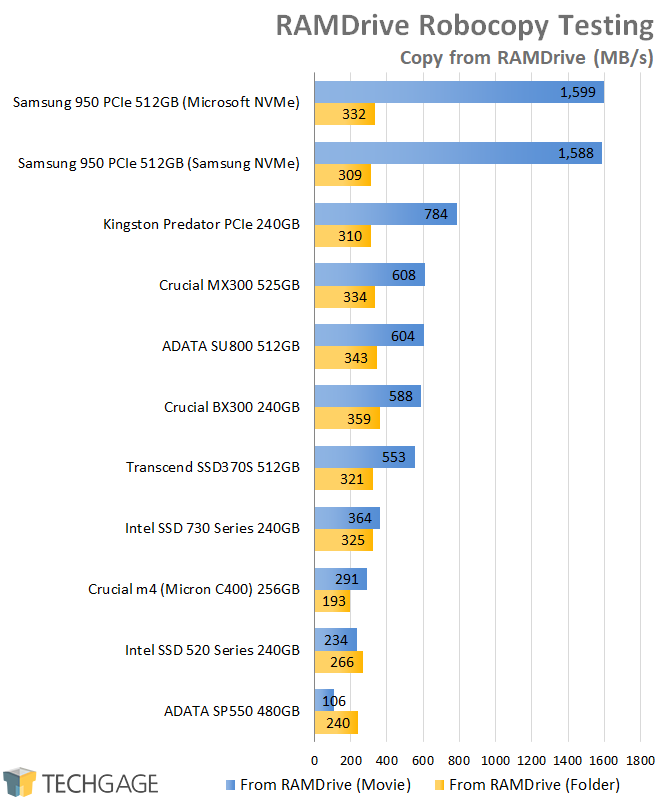 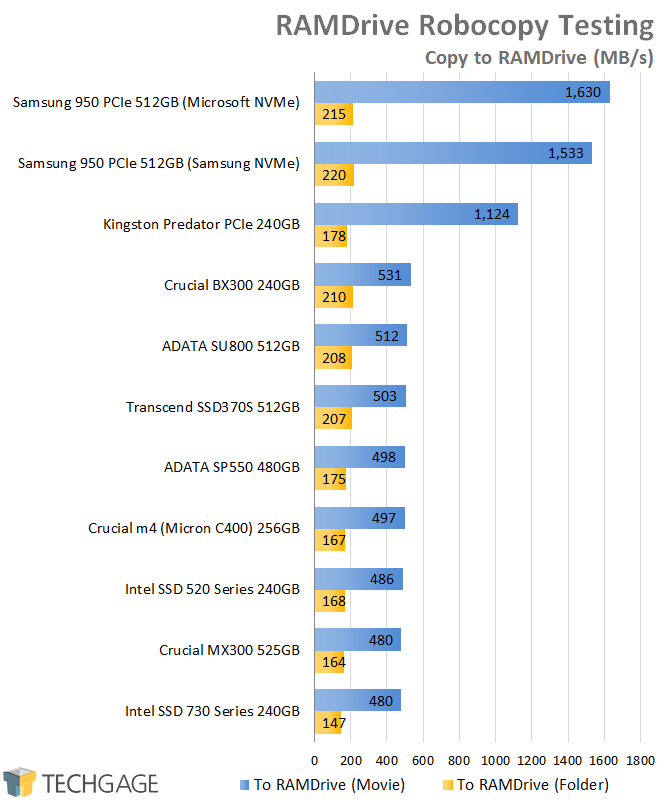 Robocopy gives us some valuable real-world usage over synthetic tests. The movie file is nearly 10GB which exceeds the 8GB fast write-cache of the 240GB BX300. Yet once again we see some curious results where the BX300 goes on to outperform the MX300 with the folder directory full of thousands of files and subfolders.

Copying data from the drive to the RAMDrive tests the read performance of the SSDs, and here the BX300 240GB is able to best the former-flagship MX300 despite its size-advantage. In fact the BX200 just became the quickest SATA 6Gb’s drive in this test. We did mention this is a budget drive, right? 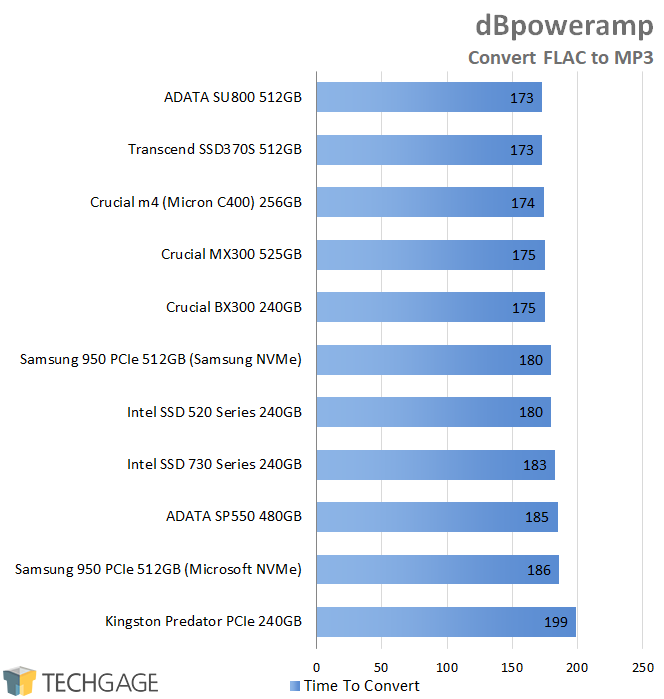 This test remains CPU bound with a Haswell quad-core processor, which goes to show why transcoding/encoding is still relegated to spinning platter drives. Amusingly the m4 is a second quicker in this test even though it shouldn’t be, but the results held through multiple runs. Even if we removed the bottleneck by upgrading to a ten (or more) core CPU it seems unlikely people would be pairing such processors with interface bottlenecked SATA drives.

The Crucial BX300 is supposed to be a budget drive, but in our tests often delivered results as good as or better than many of the SATA drives in our lineup, including the former-flagship MX300. This strong performance is in part thanks to a combination of a large SLC write cache paired with MLC NAND. As will be the case with any SSD the 120GB model simply does not have enough flash chips on the drive to extract much parallelism from the controller. This is not an issue (yet) for ~240GB and larger models but it is something consumers should be aware of if they are looking to save by going with smaller capacity drives. In addition the SLC fast-write cache for the 120GB model is only 4GB, but it doubles for the 240GB and is 16GB for the 480GB drive. This will further affect performance, so as such we would strongly recommend the 240GB drive as the minimum capacity if purchasing an SSD today. 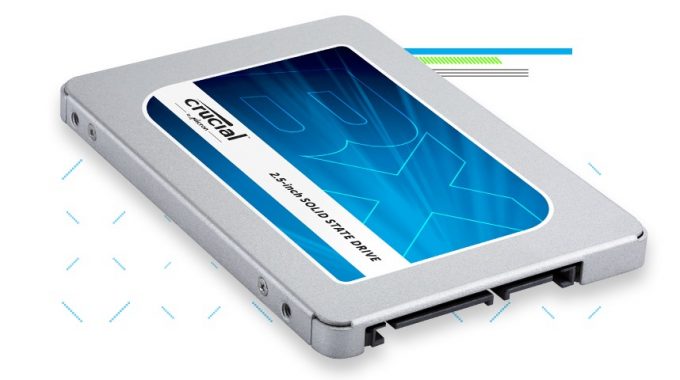 Crucial’s BX300 240GB ($88) is an amazingly fast solid-state drive for those on a budget. By far the largest caveat seems to be current market pricing, but not compared to other budget drives. Strangely Crucial’s own flagship MX500 (250GB $80) is retailing for almost $10 less as of this review and has been so for a few weeks. Both drives utilize the same Silicon Motion SM2258 controller, however the MX500 sticks with newer 64-layer TLC NAND which potentially could hinder performance if the SLC fast-cache is exceeded. Yet the MX500 has a longer 5-year warranty and adds AES-256 encryption support which the BX300 family lacks. As such, for normal consumer use the MX500 is likely the better option especially given it sells for less with slightly higher specifications.

Thanks to its edge in high queue depth 4KB random writes the BX300 240GB frequently bested the larger 525GB MX300 and even ranked as the quickest SATA 6Gb’s drive in a few of our tests. Leaving the oddities on pricing aside, the BX300 is clearly a solid-state drive designed to raise the bar on what to expect from a budget SSD. Whether looking for a new SSD or perhaps considering an upgrade from an older model, the BX300 series from Crucial aims to please with an affordable price and absolutely solid performance.