With so many companies now offering performance memory, it makes it harder to choose which one to buy. We are taking a look at Crucial’s offering, the Ballistix PC3200. Is their memory worth a purchase? Let’s check it out.

When people mention performance memory, Crucial is not usually a name that comes up. Actually, after scouring various forums around the web, I only seen Crucial listed once as a good choice for performance memory. Is there a reason for this? After putting the memory through all the benchmarks, we will be able to see. Does it have what it takes to match wits with such others as Mushkin and Corsair?

The Crucial story starts with Micron Technology, Inc., one of the largest dynamic random access memory (DRAM) manufacturers in the world and the only one based in the U.S. Headquartered in Boise, Idaho, Micron manufactures DRAM chips and assembles them into high-quality memory modules for sale to original equipment manufacturers (“OEMs”) worldwide.

In 1996, Micron responded to a growing demand for high-quality memory upgrades among end users who wanted the best possible performance from their systems. Micron launched Crucial Technology in November of that year, and for the first time, end users had the opportunity to buy directly from the manufacturer the same memory modules bought by the world’s major OEMs for original installation in their systems.

Here is the system that the memory’s being tested in. Everything in the table is stock, but a lot of overclocking is done to the CPU and Memory further in the article, and they will be noted.

As you can see from the pictures, they have chosen to use pure black PCB for the modules, and it looks fantastic. For the heat spreader, they use a Gold colored aluminum style.

There are a few things I must mention before jumping into the benchmarking and testing, basically a few issues I had from the get go. Using the stock settings, 2-2-2-6 @ 2.8v, naturally after getting the memory, I ran MemTest. I was surprised to see errors popping up within the very first test, and many more after the test ran for a while.

After toying around, and getting in contact with Crucial, they recommended that I lower the voltage. After lowering the voltage to 2.7v, amazingly, I was cut down from near 500 errors over a 10 hour period, to 1. With even more help, this time from a friend, I lowered the trc to 8 and the trcf to 10, and ran the test again with no errors.

The DFI UT Ultra-D is known for being picky with memory, so if you own one of these boards, you may have to do some simple tweaking. Crucial has one of these boards in their labs, and never experienced the same issues I have. Also, looking around the web, it seems I am the only person with this combo that encountered the problems. So, regardless of what the problem was, I found the perfectly stable setting was not 2-2-2-6 @ 2.8v, but 2-2-2-6-8-10 @ 2.7v. If you happen to have a similar set up as the one above, and encountered any of the similar problems I have, feel free to e-mail me and let me know, and I can add a quote to the review.

Here is a quick list of the configurations used throughout the review. We will get more into these later.

One of the best features of the DFI UT Ultra-D motherboard, is obviously the immense overclocking abilities. DFI gives you full control over every aspect of the memory, which makes things very simple for testing. 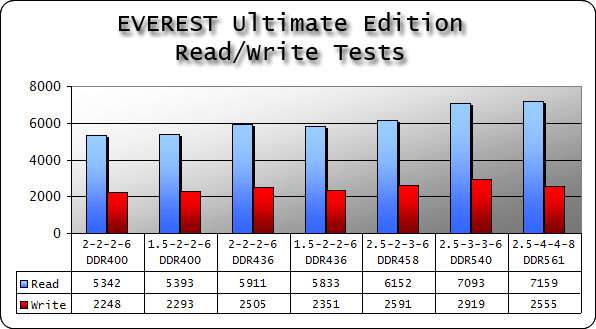 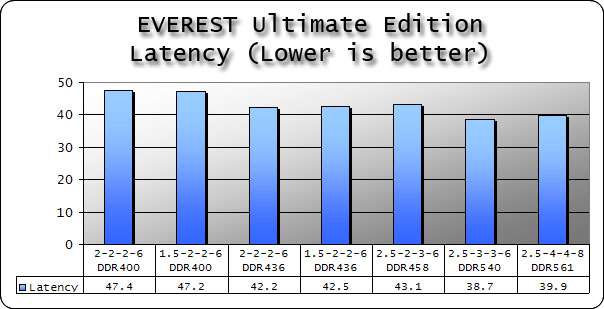 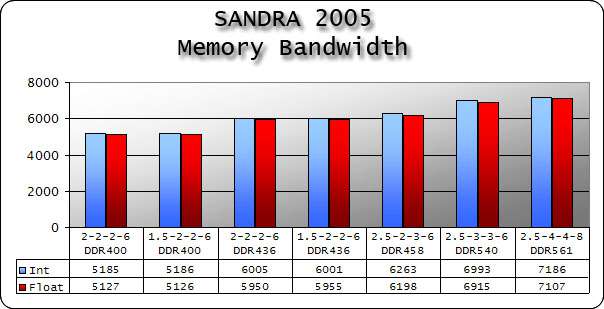 As you can see, I managed to push the memory to DDR561 speeds. While running at these speeds though, the computer worked great, until I tried to do CPU intensive benchmarks. So it seems that the memory can push DDR561 quite well actually, but my CPU was the bottleneck here. This is understandable, however, due to the fact that my CPU was clocked at 2.85GHz, and was still on stock air. Watercooled, I am sure that the computer would be completely stable. 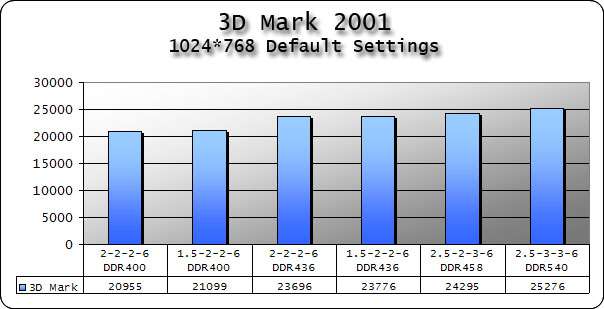 Very impressive results! One oddity though, is that Far Cry performed worse with DDR540 than it did with DDR436. I can’t begin to speculate why, as the memory was not overheating in any way. We can also see in 3D Mark, that upping the module and CPU speed, cranked out considerably better results, as expected.

I think it’s easily seen that this is a great set of memory, if not outright awesome. We seen that they are completely stable at DDR540 speeds, with 2.5-3-3-6 timings, which is no doubt impressive. If it wasn’t for my CPU bottleneck, or lack of cooling maybe, then DDR561 was a definite possibility. At any rate though, DDR540 is an awesome overclock, especially for being rock solid stable.

To use these modules though, I do recommend having some sort of active cooling. When I was not using any sort of cooling, they got HOT. Since I didn’t have any immediate way to cool them, I resorted back to my ghetto modding techniques, as you can see in the picture. 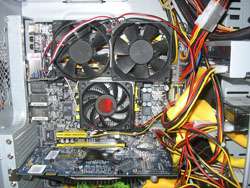 Double-sided tape for the win! Tape two 80mm fans together, and then mount that on top of your CPU fan, with yet some more double-sided tape, and you have yourself a Techgage Approved Ghetto Mod! It made all the difference in the world though, because even at overclocked speeds, they are warm to touch, instead of being outrageously hot.

Here is a quick sum up of all the tested and stable speeds I used during the review:

A few things to note before we finish off as well. As mentioned earlier, Crucial recommends 2.8v for the stock 2-2-2-6 timings but after a little bit of testing, I found that 2.5v was completely stable and gave me an error-free MemTest run. For the overclocked DDR540 speed, it only required 2.9v.. very impressive.

Without a doubt, I highly recommend Ballistix memory if you are looking to upgrade or build a new PC. It goes to show that not only such names as Mushkin and Corsair make great performance memory. We will be taking a look at Mushkin and Corsair memory in the future, but in the nearer future, you can expect another review of Ballistix memory, but this time of their PC4000 (DDR500) version, so stay tuned for that.

I want to give a big thanks to (cf)Eclipse from the HardForum, as he knows so much about Memory, especially Crucial memory. I would be stuck in last week if it wasn’t for him. Rumors are, that he knows more about Crucial than Crucial themselves :P

Have something to say? Got some more questions that need answered? Feel free to post in our related review thread here. Registration is not required, but is free if you choose to do so.