Finally, we have some Super Pi action. Long story short, the OCZ modules proved faster, but not by a huge margin. That’s to be expected in all Super Pi tests, really. 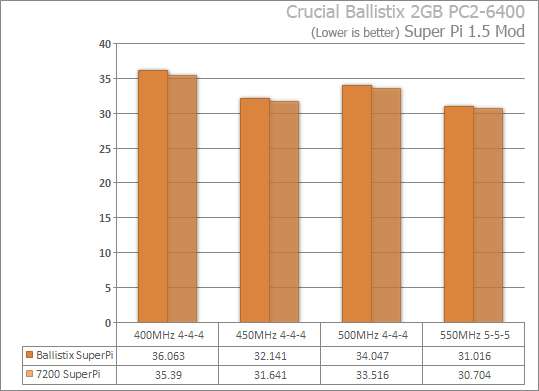 When I first laid my grubby hands on these modules, I had expected quite a bit. For one, they are Crucial! Two, they have D9GMH chips. I naturally expected a lot of performance and overclocking potential. While I am not incredibly impressed here, these modules do deliver what they promise.

Comparing these modules to others on the market in the same price range, it’s easy to find one better. For instance, the G. Skill PC2-6400 PHU2-2GBHZ have been making its rounds and pleasing many along the way. They retail for around $260US and have a ton of tweaking potential… much moreso than what I have seen with these Ballistix. I perused around a few different e-tailer sites, and one was charging around $330US for this kit, while another was charging $270. You will want to shop around, because I am sure you could even find them cheaper. 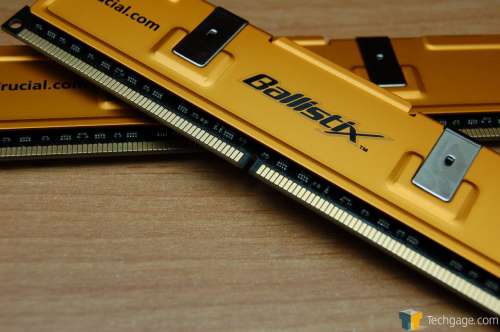 So, what would I recommend? If you are a Crucial fan and are partial to their modules, then this is a decent kit. However, 2.2v being the stock voltage is a little hardcore. If you are planning to overclock, then it won’t be a problem. DDR2-900 was just as possible without increasing the voltage… and at the same timings.

If you are not partial to Crucial, this I would avoid this kit. The performance and overclocking potential this kit offers just doesn’t warrant a $270US price tag. $240 would be more reasonable… but of course its the e-tailer who ultimately decides how much to charge. Even at $270, they will sell. Personally, I am a huge fan of OCZ’s kit that I have been including in my reviews lately, but they retail for $330-ish. If I were to run out and purchase a kit around the $250 area though, I would be quicker to jump on the earlier mentioned G. Skills over anything else.

Better chips would have made all the difference in these modules I feel. The stock voltage of 2.2v wasn’t just set by Crucial, it is actually mandatory to retain 100% stability. That’s rather high if you are planning to do no overclocking at all. This is actually the first kit I’ve come across that hasn’t worked on less voltage than noted… unless we count value sticks. But, that’s not what these are :-)

When it’s all said and done, I am giving the Ballistix PC2-6400 a 7 out of 10. Crucial… stop giving away all the best chips to other companies and slap them in your own modules! We beg you ;-)