Crucial has been selling computer memory for almost 15 years, but if one factors in that the company is the retail arm of Micron Technologies, then that number jumps to over 35 years. Over this time, Crucial has earned a solid reputation amongst enthusiasts for its memory stability and reliability by listing its kits with conservative specifications and verifying them before each kit heads out the door.

With that in mind, over two years ago the company looked to carry over that reputation into the SSD space. Kicking things off, it launched the RealSSD C300, and this year has followed it up with the m4, which we’re looking at here.

The m4 is the official successor to the C300 Series drives, and is one of the first SSDs to feature (and actually show better performance utilizing) the SATA 6Gb/s interface. Inside the drive, one will find a Marvell 88SS9174-BLD2 controller running an in-house firmware developed by Crucial. As an interesting side-note, Intel recently began utilizing a nearly identical controller with its 510 Series drives. If imitation is the sincerest form of flattery, then Crucial should be quite flattered indeed.

The drive we received for testing is a 256GB model, so it is worth highlighting that performance numbers will be higher than the 128GB model and especially the 64GBs. The m4 naturally utilizes 25nm MLC NAND from Micron on a custom PCB. Micron and Intel jointly share their own NAND production fab, so it is worth pointing out that Micron NAND is for all intents and purposes the same quality as the IMFT NAND found in Intel’s drives. And just as with its memory products, Crucial notes in the attached documentation that it tests each individual drive for up to a week prior to shipment. 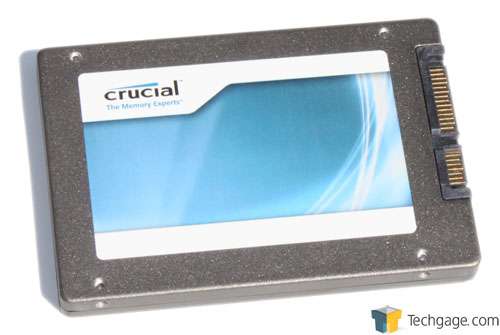 At the start of November Crucial released a major firmware update for the m4 series SSDs. Amongst minor tweaks and fixes, the FW0009 firmware introduces performance improvements, the most notable of which affects sequential reads. As such, we made sure to update our test sample to the FW0009 firmware prior to testing.

Crucial sells the m4 in two forms; a standard package or as part of a data transfer kit. The transfer kit adds about $5 to price but includes EZ GIG III cloning software and an interesting all-in-one USB-to-SATA+power cable. The single-piece USB cable alone may very well be worth the additional $5 to some enthusiasts, especially as it negates the need for an external USB drive dock.