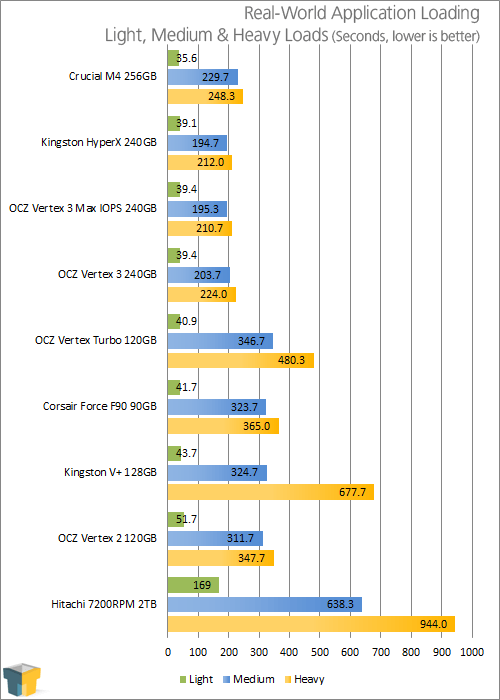 So after a few lengthy paragraphs and just a single large graph, where does the Crucial m4 stand? Right at the top with the best SSD’s currently on the market. Unlike the SandForce drives, Crucial m4 doesn’t utilize any sort of compression technology to achieve these results either which makes this feat quite impressive. This also means that regardless of file types involved the m4’s performance will be consistent across compressed and uncompressed data. Surprisingly, the m4 manages to set a new boot.

Astonishingly the m4 shaves off four seconds on the previous best time in our light batch test. So in 35 seconds it is possible for the m4 to boot the system, load Office files, start Photoshop CS5, and load some typical ancillary programs in the background. That sure beats the nearly three minutes required by a mechanical hard drive.

If the light batch test was a 100 meter dash, then the medium test is more like a 500 meter relay event. The Crucial slips back to place in a close fourth here, about 30 seconds behind the SF-2281 drives. Overall this is a solid performance given the next best SSD required more than a minute longer with the rest of the pack even further behind.

The heavy batch test is where things get really interesting. If sticking to our sprinting analogy this would be akin to the same 500 meter relay as before, but with all the runners carrying a 30lb backpack strapped to their backs. Weaker SSD controllers will struggle here, but the Crucial m4 has enough muscle to get the job done with a minimal increase in time required. The addition of a simultaneous 5GB directory anti-virus scan to the medium batch test only results in an additional 18 seconds to the overall completion time.