by Mario Figueiredo on February 27, 2012 in Gaming

Politics, intrigue, assassination and plotting. Going to war against infidels and pleasing the Pope. Claiming land from your neighbors and getting rid of inconvenient family members. That’s good old Middle Ages, for you. Read through Mario’s review of Crusader Kings II and please, please, do not attempt at home the things he’s done.

So my wife doesn’t want to give me any male descendants. We have 2 daughters and now she’s decided to become chaste. At the age of 44 and fighting every day to keep my house clean and well feed, I’m not a young man anymore. Neither is she a young woman. And I’m stuck with her. It’s only natural – and you will understand – that I have made arrangements for her assassination. I’m not a bad person, but I need to protect my bloodline. Besides, she should see it coming, that heartless witch.

David Attenborough said that one of the most important survival characteristic of mammals and what leads to their success is the strength of their family ties. Crusader Kings II, the new grand strategy game from Paradox Interactive, is here to finally tell us that humans aren’t mammals.

That means we are special. Like no other, we trick, lie, assassinate, imprison, strip of any title, or otherwise take offense, of any family member that stands in our way or that of our heir. It wasn’t only my wife that I had removed while playing as King Sancho II of Castile. My younger brothers, Alfonso VI of Leon and Garcia II of Galicia, had to eventually be disposed of by other means, because they had claims on my kingdom and were being adamant on using them. 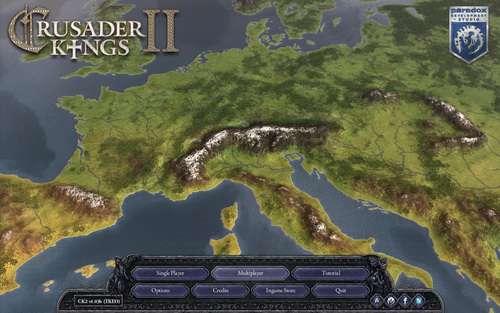 But let’s get to the review proper. Crusader Kings II isn’t about you playing as an Emperor, King, Duke or Count; that is just one of the many titles you may hold at some point in the game. And it certainly isn’t about you playing as the King of Scotland, or the Count of Angermanland (the coolest title ever); these are just titles, conquered or passed on to you or down your descendants as the game progresses.

No. Crusader Kings II is about you playing a Middle Ages European dynasty. Your task is to protect it and accumulate the highest prestige when the game ends in 1453. You have since 1066, roughly 400 years of gameplay, to do so. During that time you will die of old age, sickness, injury or become a victim of an orchestrated plot by one of your vassals, military enemies, or family members. But you will keep playing as your heir, as long as you could secure one while in life.

You may gain or lose land and titles. It matters little; or a lot, depending on your play style. As long as you can guarantee a successor from within your dynasty, you are in the game. And what a game!

Crusader Kings II offers you the whole of medieval Europe to play with, including the Middle East and coastal North Africa. Close to 1000 provinces to choose from and an absurd number of historical characters between the Counts, Dukes, Kings or Emperors of the era. You can choose to start playing as far back as 1066 when William the Conqueror (at the time William the Bastard) gets papal permission to invade England, or as close to the end game as 1337, on the onset of the Hundred Years’ War, the end of which signaled the beginning of the Early Modern Age and the definite end of the Middle Ages. 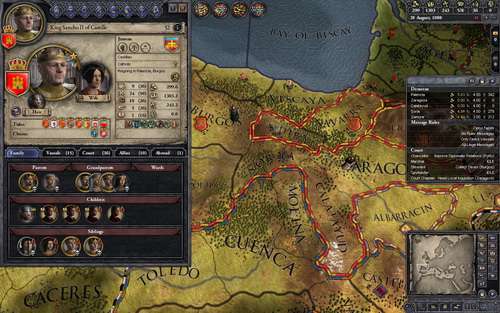 With it, comes all the baggage of medieval culture and conflict: Your house is a complex network of family members and claims to land titles. Your vassals add yet another dimension to the internal politics with their own claims, ambitious and family ties. Your court (the best of the best chosen by you) is also a potential stage for hard-to-make decisions and conflicts.

At the center of your concerns sits the Catholic Church and its ruler, the Pope. Your loyalty to the Church and your desire to fight and eliminate or convert the Pagans and Infidels surrounding you may be a precious source of new land and titles, or the downfall of your dynasty. Your decisions can affect how your bishops view you and heretics can surface in your land at any time.

The maintenance of your dynasty is a complex matter. You must raise yourself – or choose an adequate tutor for – your sons and daughters and, depending on the succession laws of your domain, you must plan ahead, securing good marriages for them that can help increase your claims to foreign land, eliminate dangerous claims to yours, or increase the prestige of your family. 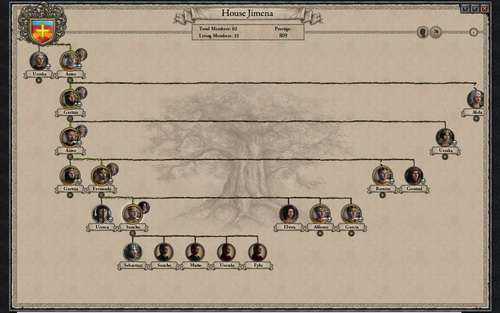 Every character in the game holds a deep and rich set of attributes and traits, many of which are gained or changed during their lifetime. These help create the character personality and influence greatly his or her abilities as a ruler, as well as how much others like or dislike him or her.