by Mario Figueiredo on February 27, 2012 in Gaming

Politics, intrigue, assassination and plotting. Going to war against infidels and pleasing the Pope. Claiming land from your neighbors and getting rid of inconvenient family members. That’s good old Middle Ages, for you. Read through Mario’s review of Crusader Kings II and please, please, do not attempt at home the things he’s done.

Combat and conquest is a secondary element to the game. The focus resides on diplomacy and politics. Not to say that combat comes as a second thought to the player strategy to secure their bloodline through the 400 years of gameplay, but combat is just one of the ways the player has to achieve their goals and likely not the one where they will be spending most of their time playing around. It becomes obvious very quickly to anyone playing it, that Paradox went to great lengths to produce the deepest and most engaging set of rules for diplomatic gameplay in any strategy game to date. It set the bar so high that I personally risk it will probably be many years before any other grand strategy game focused on expansion can reach this depth.

At the center of this tremendous effort to present players with a game of internal and external politics is intrigue. And you aren’t the only one plotting. Everyone else is, including the Count of Zaragoza that you forgot had a claim for your Duchy of Leon that he inherited when you left his loving father die in your dungeons for treason. That probably explains why you’ve been visited by assassins twice the past year and why the King of Castile, your brother and rival, is so suddenly interested in being friends with that lowly foreign Count. 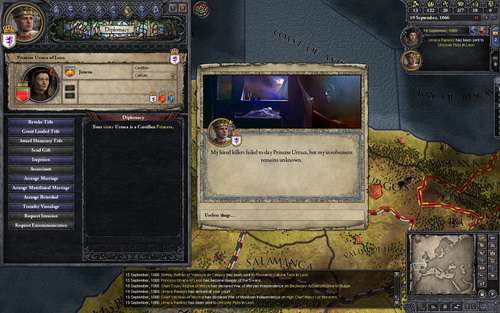 And just as in real life, many of these things will happen behind your back if you don’t pay close attention to relationships and events around you. Before you know it, St. Peter is going to welcome you with a hole in your back and your eligible heirs will soon join you, thus ending your dynasty; and the game.

But the web of intrigue and deceit is so deep that your vassals will also plot among themselves to secure their bloodline, fulfill their ambitions, or increase their own prestige. Sometimes you’ll just watch bemused as they fight it out between themselves with their personal armies and change the political landscape of your realm. Other times, you’ll be concerned if one vassal isn’t just becoming too strong, gains a claim to a part of your demesne, or if all this bickering is getting in the way of your desire to raise their levies to go to war and expand your realm, or answer the latest papal call to go fight in the Holy Land among the other Crusaders.

The political and diplomatic aspect of Crusader Kings II is so deeply entrenched in its design and so central to the gameplay, that you will have no doubts this is a game of diplomacy and intrigue. The best you ever played, by far. 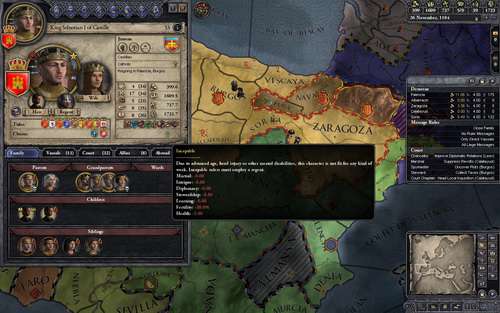 The game graphics are excellent for a grand strategy game and help transmit a medieval aura. They won’t also neither distract or tire you. The maps sport a nice 3D look. Some players (yours truly is one of them) do prefer grand strategy games on 2D maps, but Paradox was careful not to overdo it, although there are a few situations where altitude tends to partially hide domain names at certain zoom levels.

Characters’ pictures change as they grow old. White hair starts to show as well as wrinkles. The art team did a good job creating thousands of face combinations. Characters with certain traits like “Ugly” or “Lisp” may show visual defects on their picture. With future DLC it can be expected an increase on the current artwork for Crusader Kings II. There’s already one called Crusader Kings II: Mongol Faces and includes thousands of face combinations just for the Mongol culture. 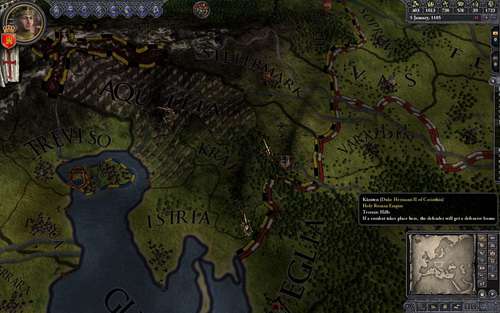 The vast amount of information available to the player is well organized and easy to reach. It’s also superbly presented. There’s hardly an excuse to say “I didn’t know”. Everything concerning the diplomatic and political state of the game world is there at any time. One just needs to look and interpret the information. If a claimant to some title of yours likes your ally better than he likes you, maybe that’s writing on the wall. Don’t underestimate the game ability to plot against you. It can if the conditions are met; and often in ways that will make you look like an amateur.

Grand strategy is often a complex genre to get into. There’s a good amount of time that needs to be dedicated just to learn how to play the game. This tends to drive some players off. Paradox has historically been a developer of this type of games, but unfortunately, never recognized for its comprehensive manuals. Eventually it gained some sort of reputation also for this that surprisingly has served them well. But nonetheless it can be a problem to new players who don’t necessarily like to, or can, invest much time learning how to play a game.

The player community has been instrumental on helping in this matter. Most of the information is generated by them. After-Action Reports (AAR), Tutorials and Let’s Play, are all instruments a new player can use to get into Crusader Kings II. But the game also comes with a tutorial that will help at least to introduce some of more important game concepts to the player. 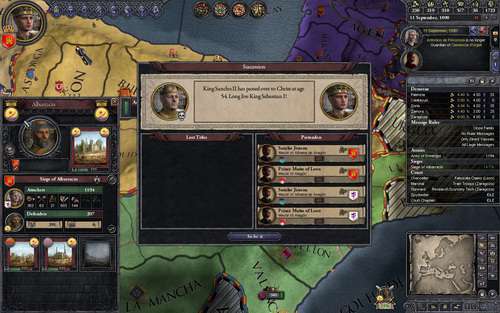 Crusader Kings II is not however a difficult game to play. In fact, it is surprisingly easy. Micro management is something that Paradox mastered in taking away from players. And many of the daily events are handled by the excellent AI representing the player vassals. It is actually a viable learning strategy to play the game and learn as you go, not being afraid to mess up and lose miserably; just understanding the first few games as a learning process.

The game AI is nothing short of masterful. It’s rare to see a game of this genre and dimension to have been launched two weeks ago and for the references to the AI in the game forums as a bug or an annoyance being so few in number. Nothing seems out of place in the game as vassals, enemies and allies follow reasonable behavioral patterns and can often in fact surprise you with very good adaptation to new circumstances.

The game also went through a surprising polished launch. Not many visible bugs and very few of them with the potential to be game changing. Clearly Paradox did a great job with Crusader Kings II and made sure it released a quality product that could please customers from the very start.

Crusader Kings II is a masterpiece in which domestic and foreign diplomacy, family ties, intrigue, and the accumulation of prestige, take the central stage of a grand strategy game that will almost certainly be considered in the future one of the best ever written. 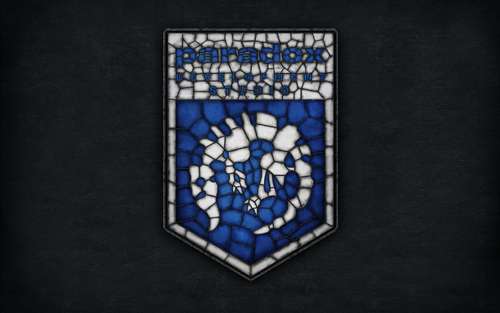 Henrik FÃ¤hreaus, the project leader and co-designer has been with Paradox since Europa Universalis II in 2001. It’s this type of experience – and a decade of accumulated know-how of a company that always concentrated its efforts on a single genre – that permitted this accomplishment of a computer game.

Want to play a game of gut-wrenching diplomacy like nothing you’ve seen before?