D-Link’s DGL-4500 wireless router brings a lot to the table, including dual-band operation, 802.11n support, a killer built-in OLED screen, on top of features perfectly suited for online gamers. Of course, such a feature-packed router doesn’t come cheap, so is it worth your hard-earned $180?

Here at Techgage, we have a broad range of PC-related hardware that we have looked at over the years. Having just turned three, we decided to celebrate by piecing together a computer that anyone on staff would be proud to call our own. Supported by companies from around the industry, one of the “extras” included in the prize package was the D-Link Xtreme gaming router, or as many like to call it, the DGL-4500. Having included the router in the prize package, the DGL-4500 topped off what we considered to be one hell of a gaming rig.

With our past review of the D-Link DIR-655 Xtreme N router being one of our most popular router reviews to date, it only made sense to get our hands on the DGL-4500 and see how much, if at all, it bested the widely popular single band 655.

Offering dual band (both 2.4 GHz and 5 GHz wireless), and sporting an attractive OLED screen on the top, the DGL-4500 certainly looks like a winner on paper but how does it stack up against the other wireless N routers we have looked at in the past?

D-Link, in all their marketing genius, has given the DGL-4500 their GamerLounge logo and dressed the router in the same plastic housing as the DIR-655… only this time around they have included a top mounted OLED screen and an all black exterior. While many consider the inclusion of the screen a bit gimmicky, typical gamers aren’t your average user and have proven time and time again that anything that lights up is square in their wheelhouse.

While the LCD screen and black color are noticeable step away from the DIR-655’s styling, the most important difference between the current best seller and D-Link’s latest gaming router is the addition of the Atheros XSPAN dual band chipset, giving the DGL-4500 the ability to connect wirelessly over the existing 2.4 GHz wireless band as well as in the less crowded 5 GHz band… providing you actually own a dual band wireless adapter. D-Link themselves just recently released their DWA-160 dual band USB wireless adapter giving those owner , or their potential owners, the ability to actually use the 5 GHz wireless band. 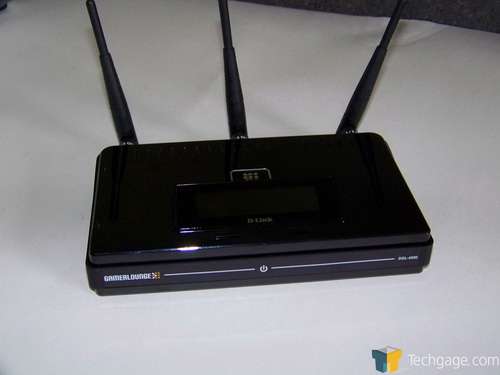 Bundled with the router is a set of accessories not uncommon to any router you might purchase from any manufacturer. Included is a small length of Cat5 cable, a power adapter, router manual, setup disk and the router itself. In an attempt to make the DGL-4500 stand apart from the rest of the pack, and to help validate it’s gaming router tagging, D-Link has also included a trial version of World In Conflict, one of the best RTS games available today. If you haven’t given it a go, I highly suggest downloading the demo and doing so.

While different from your standard RTS game (Command and Conquer for example) World in Conflict takes a step back from conventional real time strategy game play and mixes it up a bit. Regardless, the inclusion of a game, demo or not, in a router’s bundle is a nice touch, but for the money D-Link is asking for the DGL-4500, a full version would have been a nice touch. Then again, perhaps the pricing is justified as the OLED screen, I’m sure, adds a bit to what is essentially a dual band DIR-655 (more on that later.) 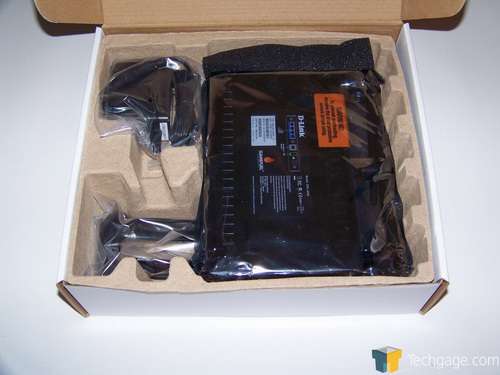 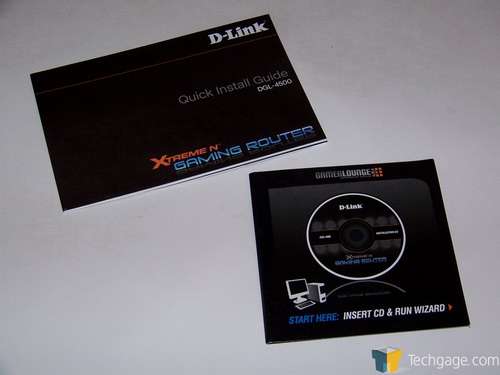 Also included with the router is a small set of screws to be used by those looking to mount the DGL-4500 onto a wall as well as a stand for those who would like to mount the router vertically to help save space on their desk (or anywhere for that matter!) Notice the power adapter’s shape. This works well when plugged directly into a wall outlet as it permits the use of the lower, or higher, socket by not covering it up. For those of you that will plug your router into a standard power strip or UPS, this might be a problem as the adapter itself might run directly over an adjacent power slot. Not a deal breaker but something that we feel should be pointed out. 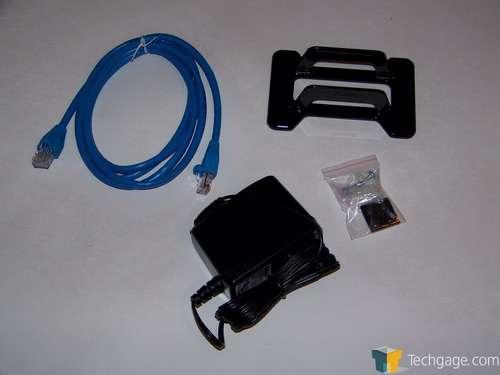 When we have the router out of its packaging, we see that D-Link as shipped the 4500 in a protective cover. Given the polish and shine on the router’s plastic housing, this is a welcome sight as any scratch big or small will show up on a surface as glossy as this. Like the DIR-655, there is also a large orange sticker informing us to run the setup disk first. This is a step in the installation process that we will be overlooking but for novices out there, running the included utility is a great idea as it assists in setting up wireless networks, securing them and helping the user get out to the Internet if needed. 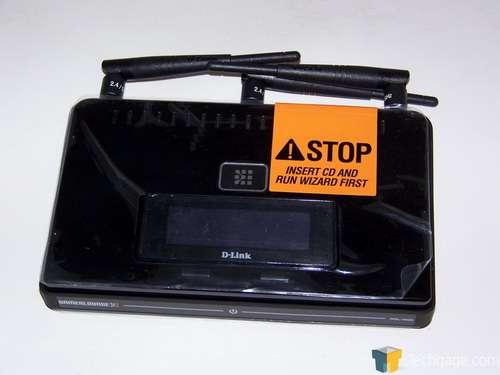 With the plastic removed, we see the 4500 in all its glossy goodness. While the plastic cover initially helps keep the router scratch free, like any iPod owner can relate to, once this covering is removed, the surface scratches easily. In this shot we can see the raised OLED screen, a pair of buttons just underneath it and on the right hand side of the router, there is a small WPS button to aid in easily connecting your wireless client to the router with minimal work involved. WPS has been something of a problematic setup for us in the past and sadly, we were unable to get it to work in our testing of the 4500 too. For what it’s worth, the WPS button glows an attractive blue with activated. 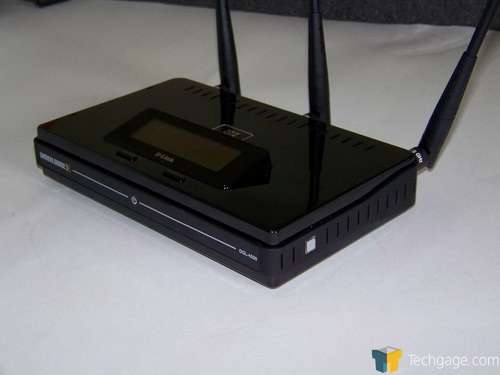 Moving around to the back of the router, we can see that the 4500 uses three antennas to broadcast and receive its wireless signals and all three connect using RP-SMA connectors, giving the end user the ability to upgrade their antennas if they see fit to do so.

Moving from left to right, we see four gigabit Ethernet ports, one WAN port appropriately labeled “Internet”, a single USB port, a small reset button and the power connection. One error made in our DIR-655 review was that we commented on the ability to use the USB port on the back of the router as a print server. This was false and in our forums we corrected the mistake.

Like that router, the 4500 includes a USB port for use in the initial wireless setup process using Windows Connect Now (WCN). This is a process that we should see move to the way side as WPS has been showing up more and more in routers everywhere. In future routers from D-Link, I think it would add a great deal of functionality to their products if the USB port found on the back of their routers could be used to add network storage or even something as simple as adding a USB based printer. Like the power adapter shown earlier, this isn’t by any means a deal breaker but something that I think would add a considerable amount of value to their routers down the road. 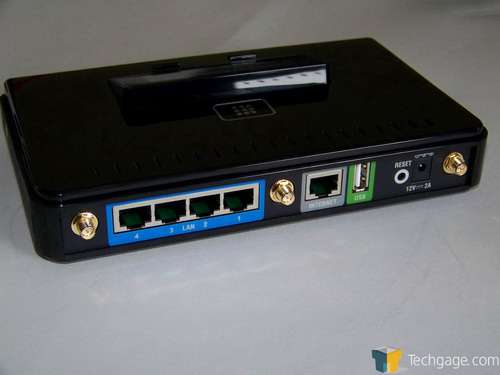 When powered on, the front of the 4500 has a small power logo that glows a brilliant blue. This is sadly the only feature of the router, besides the OLED screen (that turns off after a set amount of time) that lights up and to be honest, it was difficult not being able to see connection status lights when looking at the front of the router. Using the v1.02 firmware, the latest available from D-Link at time of publication of this review) we are initially greeted with the D-Link logo. This then goes into an initial help screen that gives us the designated functions of the two buttons found in front of the screen. 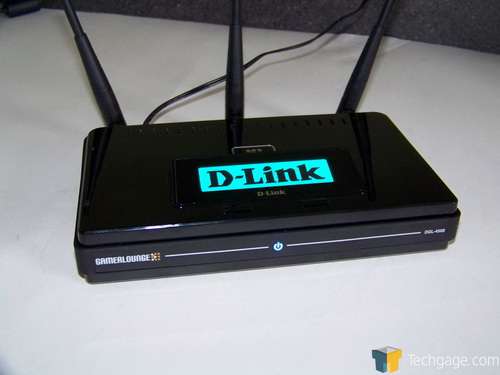 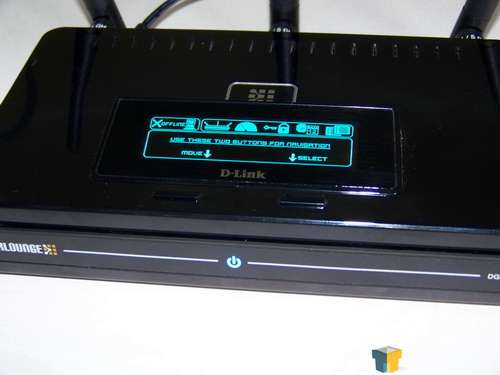 After the 4500 goes through its startup process, a process that only takes a few seconds; we are given the date and time… in 24 hour format too! 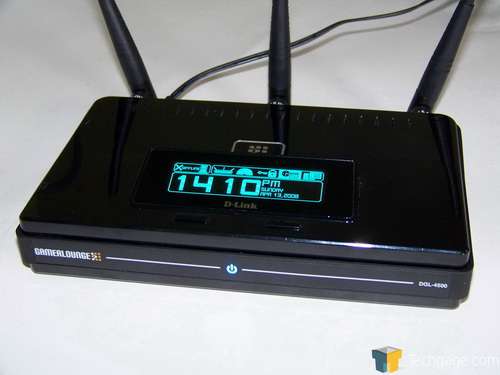 Instead of taking photographs of each screen, we went to D-Link’s site and grabbed a publicly available image containing all six of the screens in one convenient picture. 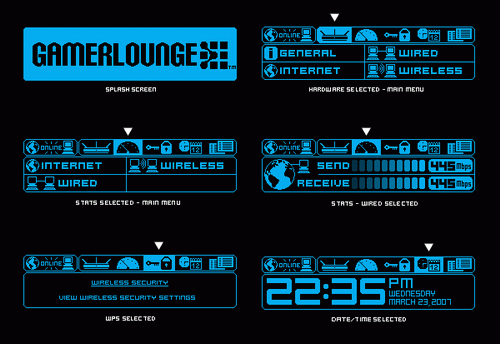 One area of our router reviews, as well as NAS, that we have worked on is bringing the readers as much detailed information on the internals of the hardware being tested as possible. This makes it easier to do research on the product at hand as well as see what other manufacturers use the same processors, chipsets and memory.

The DGL-4500, as mentioned earlier is a dual band router meaning that it has the ability to operate on the way common 2.4 GHz band or the significantly less crowded 5 GHz band if you happen to have an adapter that can get your client machine to connect to the router at this frequency. Allowing the 4500 to allow both bands is the Atheros XSPAN chipset.

Powering the router itself is the Ubicom IP5160, the same exact processor used in the phenomenal DIR-655. While powered by the same processor, the 4500 differs from the single band 655 with a Realtek RT8356 whereas the 655 is powered by a Vitesse VSC7385.
With a little investigating, these chips can be read up on more thoroughly online. Thanks to our friends at Small Net Builder for some of the information regarding the internals of the 4500.