D-Link’s DGL-4500 wireless router brings a lot to the table, including dual-band operation, 802.11n support, a killer built-in OLED screen, on top of features perfectly suited for online gamers. Of course, such a feature-packed router doesn’t come cheap, so is it worth your hard-earned $180?


As with all of our other recent network hardware reviews, we start out with our single 585MB Microsoft Windows XP image and transfer it from one machine to another. In the case of router testing, these tests will be run over wireless N. Sadly, we were not able to secure a dual band wireless adapter so our performance results will only be in the highly populated 2.4 GHz band.

I was however able to order an adapter and will update the review when it arrives later this week and I have thoroughly tested the performance difference between the DGL-4500 operating in the 2.4 GHz band and the 5 GHz band.

Transfers are run a total of three times with the three results averaged out for a final, absolute time. This process is conducted the same way for both upload and download traffic.

The two testbeds for my testing are as follows: 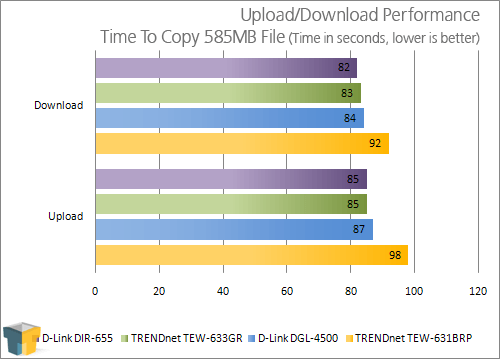 Wrapping up our testing, we found that the DGL-4500 performed exceptionally well but was still bested, ever so slightly, by its older, single band brother the DIR-655. Considering that the 655 and the TRENDnet TEW-633GR share the same internal hardware, it was not surprising to see them so close in the charts. We had the TRENDnet TEW-631BRP budget N router bringing up the rear of the contestants but given its price, it’s still not a bad performer either.

So, the question of the day is whether or not the 4500 is worth the extra cost over the DIR-655. The answer to that question comes down to what you prefer your router look like. Granted, the 4500 is geared towards gamers and with its gamefuel technology and its robust firewall settings, it does have a few more options than the 655. We also can’t forget the OLED screen. 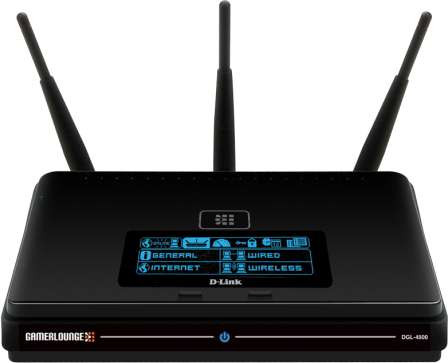 To answer my own question, I say no. I do not think that the DGL-4500 is worth the extra $50 – $70 dollars over the excellent performing 655, or even the TEW-633GR. I would personally keep the extra money and use it to buy a game… or anything that $60 (on average) would buy you. That said, I do think that the DGL-4500 has its place and for those just now building up a new home network, I think you would do yourself well to consider going all 5 GHz. This will be verified when we receive our dual band adapter but from looking around the web, the less populated band does come with its benefits.

When prices start to come down a bit, and dual band adapters start to become more available, the 4500 will become a far easier router to recommend. That said, by the time all that happens, hopefully the D-Link DIR-855 will come down in price, eliminating the need for the 4500 altogether. The DIR-855 uses the same chipset as the 4500 but comes in a white casing and uses an extra radio to allow simultaneous use of both bands.

As it stands, the DGL-4500 is a superb router with more than enough features to keep most all home networks safe and running at maximum speed. With the availability of the DWA-160, we can all now enjoy the 5 GHz band and for those that need it, a D-Link developed adapter is a welcome sight indeed. All that said, the D-Link DGL-4500 earns an 8 out of 10. It’s fast but expensive and with the availability of the cheaper DIR-655, users that don’t need the dual band capabilities should go with the 655. Those that need the 5 GHz band and are partial to D-Link, the DGL-4500 is unquestionably a great choice for gamers and non-gamers alike.